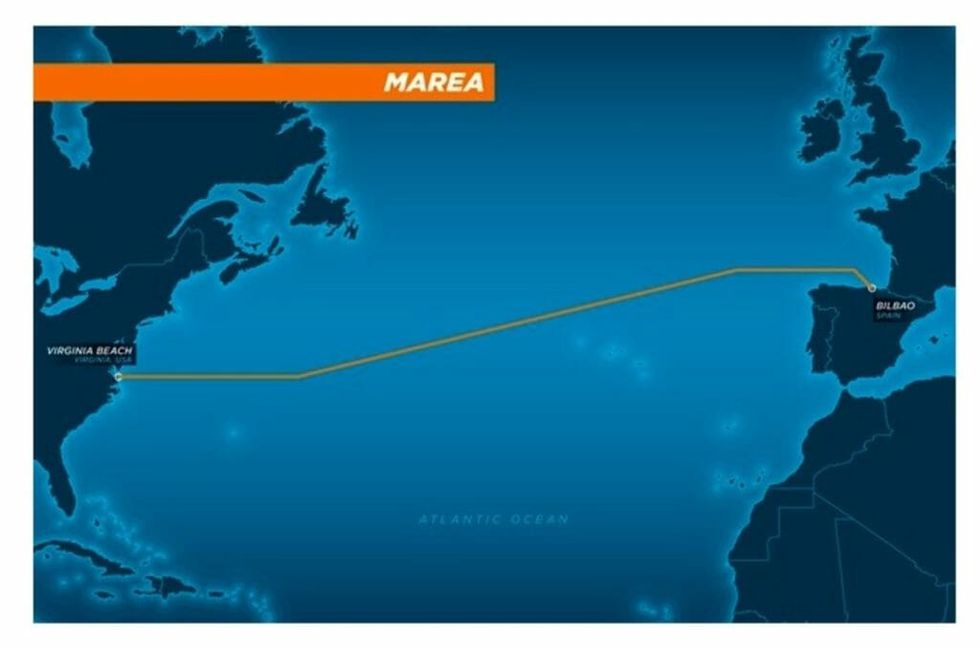 Heads up, sea life. There’s something new in the ocean. Humanity’s deep need for fast-streaming video has inspired Facebook to team up with Microsoft to unspool a 4,000-mile-long fiber optic cable across the ocean, linking Virginia Beach, Virginia, with Bilbao, Spain. The cable is called Marea, Spanish for “tide,” and can transmit 160 terabits of data per second, the equivalent of streaming 71 million HD videos at the same time. It’s 16 million times faster than an average home Internet connection and will be operational in early 2018.

The cable is made from eight layers of fiber optics encased in copper, with a protective plastic coating and a waterproof coating. It will lay on the ocean floor at an average depth of 11,000 feet. The cable will be buried at shallower depths near the shorelines to prevent interference from shipping vessels. Telxius, a subsidiary of telecom provider Telefónica, handled the construction process and operates the cable.

Rafael Arranz, chief operating officer for Telxius, said, “All of these applications, especially everything that is driven by video, consume a huge amount of bandwidth. So everybody needs to be connected with a high-volume, high-bandwidth infrastructure. With its unique route, this cable is going to be able to absorb and deliver back-and-forth traffic to strengthen communications, not just across the Atlantic, but across the globe.”

Another factor: Land-based infrastructure is vulnerable to natural disasters, including hurricanes, earthquakes, and tornados. Undersea cables may have a better chance at withstanding storms.

Undersea cable isn’t impermeable to damage, however. In Puerto Rico, cellphone towers were toppled and Internet cables were severed on land. “Telecom and power infrastructure was virtually destroyed,” said a T-Mobile spokesperson. “Even submarine cables to the mainland were damaged.” In August 2017, typhoons damaged a cable running from Perth to Singapore and other points in Asia. The damage caused speed, latency and packet loss problems. “This may result in webpages taking longer to load, as well as impact to time-sensitive activities such as online gaming,” said the cable’s operators. Another risk: Anchors dropped by ships.

Most people credit satellites with the fast delivery of Internet. However, subsea cables enable about 98 percent of all Internet activity. Today, millions of miles of cable crisscross the ocean and connect nearly every landmass on Earth — and nearly 94 percent of cable will ultimately be abandoned on the ocean floor, spawning cable recovery companies who harvest it for reuse of its valuable materials.

“It is like the Wild West in the middle of the ocean,” said Arne de Jong, a Dutch ship captain who co-founded cable recovery company CRS Holland. “There’s no police or authority that can control it. There are millions of kilometers of cables on that ocean floor.”

Some of these undersea cables pre-date the Internet — really pre-date it. In the 1860s, the first telegraph wires laid across the Atlantic Ocean connected the US with Europe. By 1900, about 300,000 miles of telegraph cables crossed the ocean floor.

In other words, there’s nothing new under the sea.