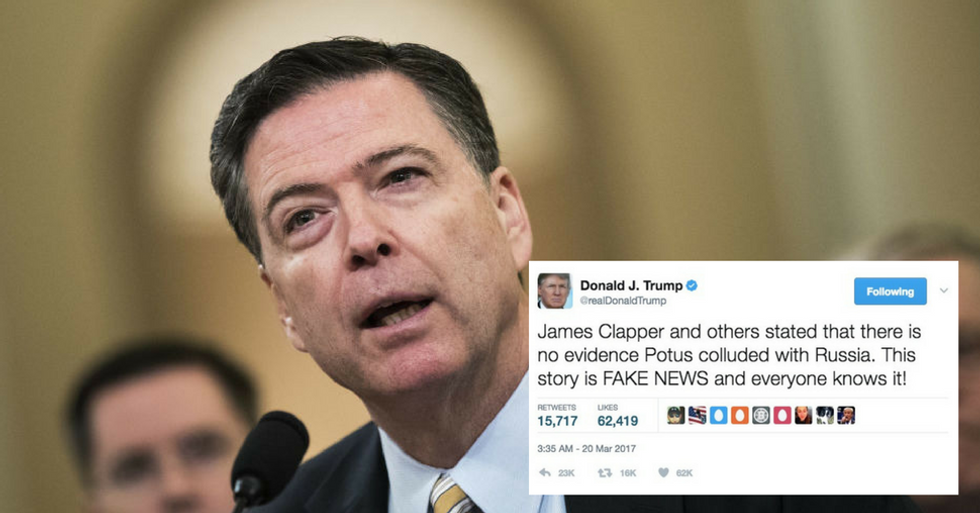 President Donald Trump issued tweets ahead of and during FBI Director James Comey's hearing before The House Permanent Select Committee on Intelligence seeking to discredit any investigation into his or his campaign's Russian ties. The tweets did not hold up under scrutiny.

James Clapper and others stated that there is no evidence Potus colluded with Russia. This story is FAKE NEWS and everyone knows it!
— Donald J. Trump (@Donald J. Trump) 1490006128.0

He then suggested that any conclusion about Russian interference was politically motivated.

The Democrats made up and pushed the Russian story as an excuse for running a terrible campaign. Big advantage in Electoral College & lost!
— Donald J. Trump (@Donald J. Trump) 1490006988.0

In his opening testimony, Comey confirmed that his agency is investigating any possible links between Russia and the Trump campaign during last year's presidential race:

I have been authorized by the Department of Justice to confirm that the FBI, as part of our counterintelligence mission, is investigating the Russian government’s efforts to interfere in the 2016 presidential election and that includes investigating the nature of any links between individuals associated with the Trump campaign and the Russian government and whether there was any coordination between the campaign and Russia’s efforts. As with any counterintelligence investigation, this will also include an assessment of whether any crimes were committed.

Until yesterday's hearing, the FBI had not publicly confirmed it was investigating the activities of people associated with the Trump campaign.

As the hearing continued, and as the damage to the White House became clearer, the president's tweets to his followers took a wider turn.

Comey rejected Trump's claims on March 4 that former President Barack Obama ordered the wiretapping of Trump Tower, which the president had leveled without evidence.

How low has President Obama gone to tapp my phones during the very sacred election process. This is Nixon/Watergate. Bad (or sick) guy!
— Donald J. Trump (@Donald J. Trump) 1488628968.0

Comey minced few words. “I have no information that supports those tweets, and we have looked carefully inside the FBI,” Comey said, adding that no president on his own could order a wiretap and that such an action would first need approval from a judge. “The Department of Justice has asked me to share with you that the answer is the same for the Department of Justice and all its components. The department has no information that supports those tweets.”

Then, NSA Director Michael Rogers dismissed the White House's suggestion that British intelligence surveilled Trump Tower on Obama's orders, telling the committee that the request would violate U.S. law and that the claim “clearly frustrates a key ally of ours.”

The claim baffled the two men: They had just testified, as Rogers does in the video above, that there was no evidence Russian cyber-actors changed vote tallies in Michigan and other states. In fact, Rogers stresses, “I would highlight we are a foreign intelligence organization, not a domestic intelligence organization. So it would be fair to say, we are probably not the best organization to provide a more complete answer.”

When asked to live-fact-check the tweet from the presidential Twitter account, Comey said, "It certainly wasn't our intention to say that today. We don't have any information on that subject."

Another tweet from the presidential Twitter account suggested Comey was "refusing to deny" a briefing from Obama, implying Obama and Comey could have been the source of leaked information about meetings between Michael Flynn and Sergei Kislyak, the Russian Ambassador to the United States that culminated in Flynn's abrupt resignation.

In fact, Comey urged lawmakers at numerous points throughout the hearing not to read too much into his inability to comment on questions because there were constraints on what he is allowed to publicly discuss.

"I know speculating is part of human nature, but it really isn't fair to draw conclusions simply because I say that I can't comment," Comey said.

A White House official who spoke to CNN during the hearing said that "nothing has changed" as a result of Comey's testimony. "Senior Obama intelligence officials have gone on record to confirm there is NO EVIDENCE of Trump-Russia collusion and there is NO EVIDENCE of a Trump-Russia scandal," the official said. "Obama's CIA director said so. Obama's Director of National Intelligence said so. We take them at their word."

The official's statement is misleading, however. While former Director of National Intelligence James Clapper told NBC earlier this month that he has seen "no evidence of such collusion" between Russia and Trump's campaign, he said in an earlier statement that it was "in the best interest of all Americans" to investigate any possible ties between Trump and the Kremlin.

Later that evening, reaction was disdainful. Late Night host Seth Meyers dedicated a segment of his show to the Comey hearing––and Trump's tweets.

"Even crazier" than Comey's revelation that the FBI is investigating the president, Meyers noted, is that “while the hearing was still happening, Trump tweeted—Trump tweeted from the president’s official account!—‘The NSA and FBI tell Congress that Russia did not influence electoral process.’”

"Witnesses in a hearing are fact-checking the president’s tweets about that hearing during a hearing. They might as well just throw to Ernie, Kenny, and Charles,” joked Meyers, referring to the trio on TNT’s Inside the NBA. “All of this, of course, raises the question once again of where the president gets his information, because we are now at the point where the crazy things the president says are making their way into the halls of Congress, and wasting the time of allies, intelligence officials, and the FBI director.”

The House committee investigation into possible Russian interference will continue. Lawmakers have scheduled a separate hearing for March 28.