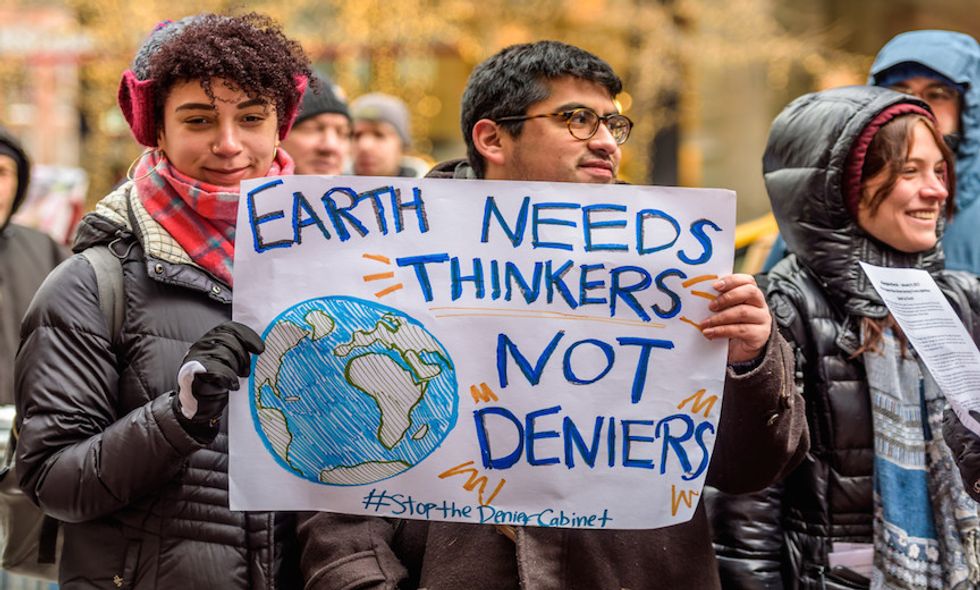 SENATOR SCHUMER'S OFFICE - MANHATTAN, NEW YORK, NY, UNITED STATES - 2017/01/09: On Monday, January 9th, New York activist groups are joining a national day of action to urge Senators Schumer and Gellibrand to stand with science and our communities and against the hate and denial demonstrated by Trumps Climate Denial Cabinet. In all 50 states, groups are urging Senators to stand on the side of the people. In the face of a regressive and greedy federal government that plans to regress on much of the progress on climate seen in the last years, urging state elected officials to stand with the people and against the greedy fossil fuel industry. Staff members from both offices came down to accept letters and petitions from the groups. (Photo by Erik McGregor/Pacific Press/LightRocket via Getty Images)

President Donald Trump’s Fiscal Year 2018 discretionary budget proposal includes deep cuts to some government agencies (State Department to be slashed by 29 percent, EPA by 31 percent) and popular programs (most famously, the Corporation For Public Broadcasting and Meals on Wheels). Less conspicuous than these cuts, although no less insidious, is the Trump administration's proposed cut to the National Institutes of Health.

Under President Trump's proposal, the NIH budget, which funds grants to hundreds of thousands of researchers at universities and labs around the world doing cutting edge research on diseases and disorders from cancer to mental illness, would be cut by approximately $6 billion or 19 percent of its 2017 discretionary budget.

To the scientific community, this is a terrifying prospect.

Peter Hotez, dean of the National School of Tropical Medicine at Baylor College of Medicine, said these cuts “would bring American biomedical science to a halt and forever shut out a generation of young scientists. It would take a decade for us to recover and move the world's center of science from the U.S. to China, Germany, and Singapore, where investments are now robust."

Cuts of this magnitude will cause American innovation to fall behind the rest of the world. An ironic result for a President who claims to want to make America great.

Joy Hirsch of the Yale School of Medicine says “one of our most valuable natural resources is our science infrastructure and culture of discovery. It takes only one savage blow to halt our dreams of curing diseases such as cancer, dementia, heart failure...this list goes on and on.”

One can look to private funding to fill the gap, but it will not be nearly enough. And the importance of public funding of medical research can not be understated. For one, public investment is broad and deep, funding a wide range of projects over many years. Private investors, on the other hand, tend to gravitate toward hot trends in medical research or their own narrow interests, and tend to demand a quicker return on their investment.

Another potential bright spot for medical researchers, ironically, is Trump's proposed budget itself, which also seeks a 9 percent increase in defense spending. While details are somewhat murky on precisely which programs and projects would get additional funding in Trump's dream budget (among them: investment in a new school choice initiative as well as construction of the border wall), defense budgets have traditionally been known to include their own funding for groundbreaking medical research.

In addition, Trump's budget does allocate an additional $200 million to fund the 21st Century Cures Act, a $6.3 billion investment in cancer research and opioid epidemic mitigation that passed both houses of Congress late last year with strong bipartisan support. The Cures Act actually increased the NIH budget by $4 billion.

But perhaps the best hope for the scientific community, which is fearful for the future of American scientific innovation under President Trump, is that budget proposals released by presidents are rarely adopted as is. In fact, President Obama's FY 2017 budget proposal was ignored completely. Rather, these documents serve as a blueprint or a statement of a president's priorities.

So while the scientific community can take some solace in the fact that Congress is unlikely to approve these cuts, it is undeniably dispiriting to have a president as disinterested in scientific investment as Donald Trump appears to be.

In fact, as of mid-March, Donald Trump had only moved to fill one out of 46 crucial Senate-confirmed science and technology positions in his administration. How will science ever be a priority for this administration if no one on the inside is fighting for it?