2017 Was an Incredible Year for Science. Here Are the Year's Top 10 Discoveries 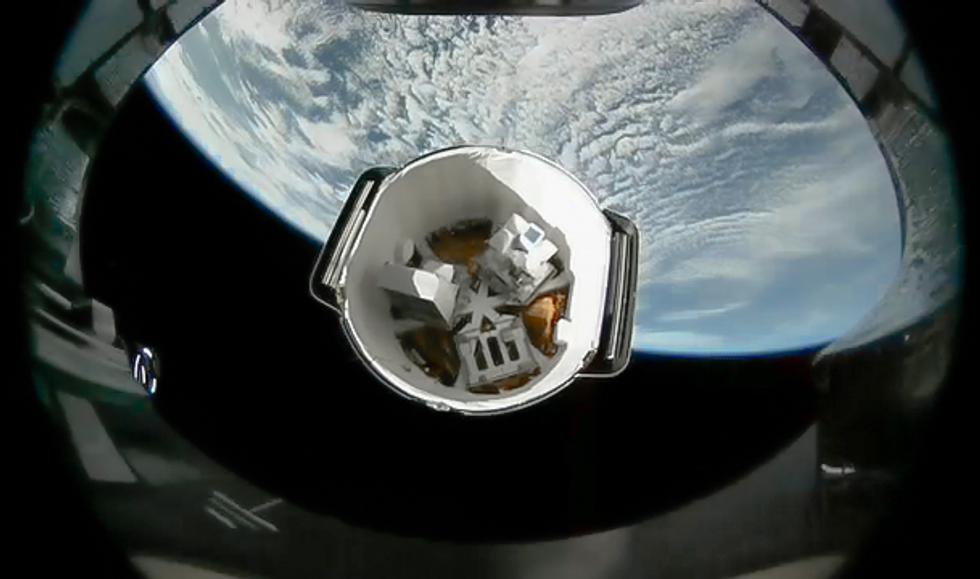 Each year, scientists make new discoveries with items as small as subatomic particles or as big as the universe. 2017 saw us enter a science-fiction future, from human cell regeneration for growing organs to recycling orbital rockets.

Research teams and scientists around the globe worked to bring about these advances. Tomorrow’s world is being reshaped while you read this. Let’s take a moment and recognize their efforts.

Here, in no particular order, are 10 of the most interesting scientific discoveries of 2017.

1. Scientists In The US Edited A Human Embryo For The First Time

Scientists used the tool to correct a genetic mutation that causes a heart condition called hypertrophic cardiomyopathy in embryos that were developed, but not implanted. Similar research in China was also successful a few years ago.

A sediment core obtained through deep-sea drilling. It’ll be pored over by scientists long after the expedition’s end. (Photo: Tim Fulton via IODP JRSO/ NSF)

The lost land of Zealandia sits on the ocean floor between New Zealand and New Caledonia. Also known as the New Zealand continent or Tasmantis, 94% submerged mass of continental crust sank after breaking away from Australia 60–85 million years ago, having separated from Antarctica between 85 and 130 million years ago.

Researchers found fossils suggesting novel kinds of plants and organisms once lived there. Some argue Zealandia should be our 7th geologic continent.

We learn that seven continents exist: Africa, Asia, Antarctica, Australia, Europe, North America and South America. But geologists look at the rocks and tend to ignore the humans. They group Europe and Asia into a supercontinent — Eurasia — making for a total of six currently recognized geologic continents.

Major strides have been made in the field of regenerative medicine.

The Wake Forest Institute for Regenerative Medicine currently leads projects to speed the development of artificially grown human tissue and even organs in a lab. These new initiatives may one day repair nerve damage and even grow entire limbs or organs for transplantation.

Scientists at the Salk Institute in La Jolla, CA, said they're one step closer to being able to grow human organs inside pigs. In their latest research, they grew human cells inside pig embryos. Scientists say it could help with studying disease and the development of different drugs. It could eventually lead to human organ donation.

NASA found seven planets orbiting a star in a neighboring solar system, known as TRAPPIST-1; six of them rocky planets like our own. While it sounds like an astrology reading, scientists discovered seven earth-sized planets in the constellation of Aquarius.

Scientists classify these exoplanets as in the "Goldilocks Zone" — not too hot, not too cold, but just right for life to thrive. And they're close by, universally speaking: only 39 light years from Earth. NASA scientists say these planets are close enough for further study. Researchers hope that "within a decade" we might be able to determine if life exists on the planets.

"I think we've made a crucial step in finding out if there's life out there," said Amaury Triaud, a researcher at the Institute of Astronomy at Cambridge University. "If life managed to thrive and release gases in a similar way as Earth, we will know."

Meanwhile, scientists at the European Organisation for Astronomical Research (ESO) found the best candidate for extraterrestrial life so far: a super-Earth named LHS 1140b in the habitable zone of a dim star 41 light-years away from Earth. It receives about half as much sunlight from its star, LHS 1140, as the Earth does from the Sun.

“This is the most exciting exoplanet I’ve seen in the past decade,” author Jason Dittmann of the Harvard-Smithsonian Center for Astrophysics said in an ESO press release. “We could hardly hope for a better target to perform one of the biggest quests in science — searching for evidence of life beyond Earth.”

5. Cassini Ends Its 13-Year Mission Exploring Saturn & Its Moons In a Blaze of Glory

Before the Cassini probe took a suicide dive through the atmosphere of Saturn on September 15, it beamed back amazing photos of Saturn never seen before.

After 13 years, Cassini's 'grand finale' mission began with a fly-by of the planet's moon, Titan. Cassini then soared through a 1,200-mile opening between Saturn and its rings of ice.

The spacecraft ultimately headed down into the planet's clouds to burn up.  NASA killed its only Saturn probe because Cassini discovered oceans that may harbor alien life below the surfaces of Enceladus and Titan, two of Saturn's largest moons. The nuclear-powered probe, nearly out of propellant, risked contaminating the moons in a crash.

Boosters, the most expensive part of a multi-stage rocket launch, traditionally end up at the bottom of the ocean after a single use.

But SpaceX CEO Elon Musk banked on the reusable Falcon 9 and Falcon Heavy booster systems, which can be re-used relatively quickly and cheaply, saving $18 million a launch.

Musk managed to salvage a reusable rocket on March 30th, when a Falcon 9 delivered a satellite into orbit, then its first-stage booster fell back into the atmosphere and landed itself on a drone ship in the Atlantic Ocean.

"Right in the bull's-eye," Musk said, calling it a “huge revolution in spaceflight.” SpaceX pulled off at least 20 launches and landings of a booster in 2017.

7. Lambs Develop Outside the Womb in an Artificial Uterus

Premature birth is the leading cause of death for newborns. Creating an artificial womb would reduce those fatalities. Physicians at the Children’s Hospital of Philadelphia managed to imitate a mother’s uterus using a synthetic device. They worked with 23 week-old lambs, hoping to limit mortality and disease in premature children that are born before 37 weeks.

Albert Einstein's theory of general relativity states space and time are unified into one continuum: space-time. Objects in the universe, no matter their size, warp space-time as they move, creating ripples known as gravitational waves.

Until recently, it was just a theory. But technological advancements allowed astrophysicists to measure the massive gravitational waves created by huge objects in deep space.

Harvard University scientists figured out how to turn hydrogen - the lightest of all elements - into a metal, a task studied for almost 100 years.

Experts say this new discovery could revolutionize the modern world. The properties of metallic hydrogen could lead to faster supercomputers, levitating railways, and advances in energy that could literally power rocket ships deep into our solar system.

"It takes a tremendous amount of energy to make metallic hydrogen," said Professor Isaac Silvera. "And if you convert it back to molecular hydrogen, all that energy is released, so it would make it the most powerful rocket propellant known to man and could revolutionize rocketry. That would easily allow you to explore the outer planets."

Scientists created metallic hydrogen by applying almost five million atmospheres of pressure to liquid hydrogen. That’s about five million times the pressure we experience on land at sea level and 4,500 times that experienced at the bottom of the ocean.

Researchers at MIT and the University of California, Berkeley, figured out how create water from thin air. Their device pulls water out of air in weather conditions where there's as low as 20 percent humidity. Solar-powered, it uses a metal-organic framework made of zirconium and fumarate to remove the water vapor.

The prototype pulled three quarts of water in 12 hours while sitting in an area of 20% - 30% humidity. Scientists believe this will benefit areas with little access to clean water.

Honorable Mention: Chinese Scientists Made a "Quantum" Leap into Teleportation

Star Trek fans, rejoice: a teleporter is here! Sort of.

Scientists in China teleported properties of light particles called photons from the ground into outer space for the first time, using mirrors and lasers.

It was a huge success for quantum physicists who say the finding could change how we move energy and information around the world. It could lead to a whole new kind of quantum computing. This kind of super-speed quantum internet would be a safer, faster, virtually hack-proof kind of communication.