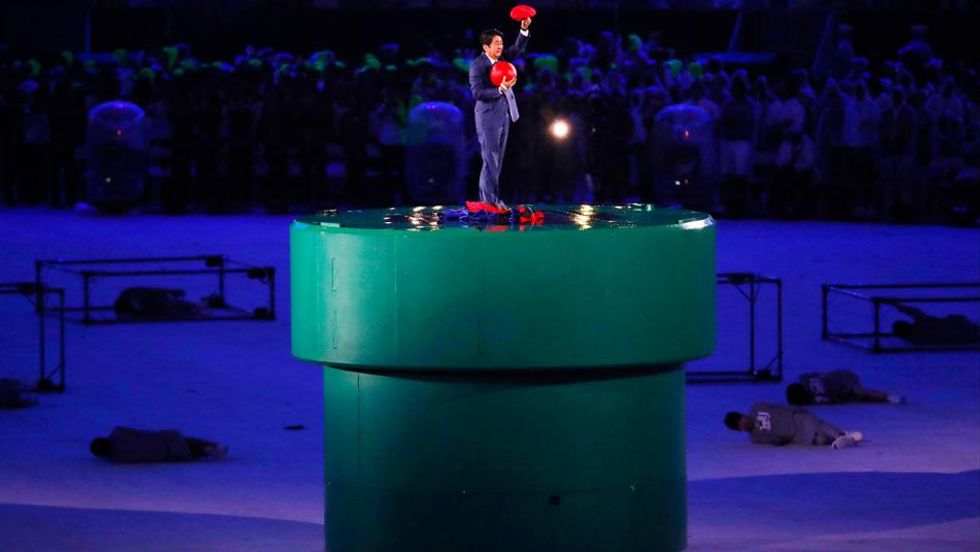 Japan's Prime Minister Shinzō Abe delighted the crowd gathered at the closing ceremony for The Rio Games with his appearance via video feed. In the video, Abe announced he would not make it to the ceremony in time. To get there, he turned into video game plumber Mario and used a huge green pipe as a shortcut. His appearance set the tone for Japan’s plans for Tokyo’s upcoming Olympics.

The Japanese government aims to triple their spending on robotics, and organizers for Tokyo’s 2020 Olympics hope their ambitious tech projects will boost the economy and wow crowds. Tourists staying next to Olympic Village in Tokyo’s Odaiba district will have the opportunity to live in a “universal future society,” according to Japan’s science and technology ministry. Robots will help visitors carry luggage and hail taxis. Robot concierges will greet them in hotels. Japanese company Panasonic is creating translation gadgets that visitors can work around their necks. Robots will also offer instant translation services free of charge.

Humans might one day attend a Robot Olympics, presumably a separate event. In an interview in 2014, Japanese Prime Minister Shinzo Abe said he would like “to gather all the world’s robots and aim where they [robots] compete in technical skills.” He said the country wants “to make robots a major pillar of our economic growth strategy." With industrial robotics set to grow into a $40 billion global industry by 2020, it appears Japan, known internationally for its technological innovations, will lead the robot revolution.

Jim Heverin, director at Zaha Hadid Architects, explains that the design for the signature national stadium, rendered by leading Japanese architect Kengo Kuma, “is being built to host the widest variety of events in the future.” He said the stadium will serve as a venue for the 2019 Rugby World Cup––Japan will be the first country in Asia to host the event. “The key to a successful stadium is to design

for these long term requirements, rather than the one-off event such as the Olympics,” Hevrin stressed.

But Kuma’s work was not the initial design for the stadium. Internationally renowned Iraqi-British architect Zaha Hadid’s design for the 2020 Olympic stadium became the subject of controversy despite winning an international competition. Japanese architect Arata Isozaki called it “a turtle waiting for Japan to sink so it can swim away.” The project, plagued by budget cuts and design revisions, would “be a disgrace to future generations.”

Tokyo last held in a summer Olympics in 1964 in a “crowning achievement for post-war Japan,” according to Sandra Collins, a specialist in Japanese Olympics history. "The Japanese wanted to show the world that were no longer a war-mongering nation...that they had arrived on the international world stage as a team player,” she added. Tokyo’s Olympic Committee will promote a similar message of hope in 2020 and emphasize Japan’s technology and safety. "I think the kind of hope that Japan is trying to perpetuate both domestically and internationally is that it still has the wherewithal, despite being an aging population with stagnant growth," said Collins. "Japan wants to show that they can be resourceful in the way that most modern cities and nations will have to be in this kind of turbulent global society."