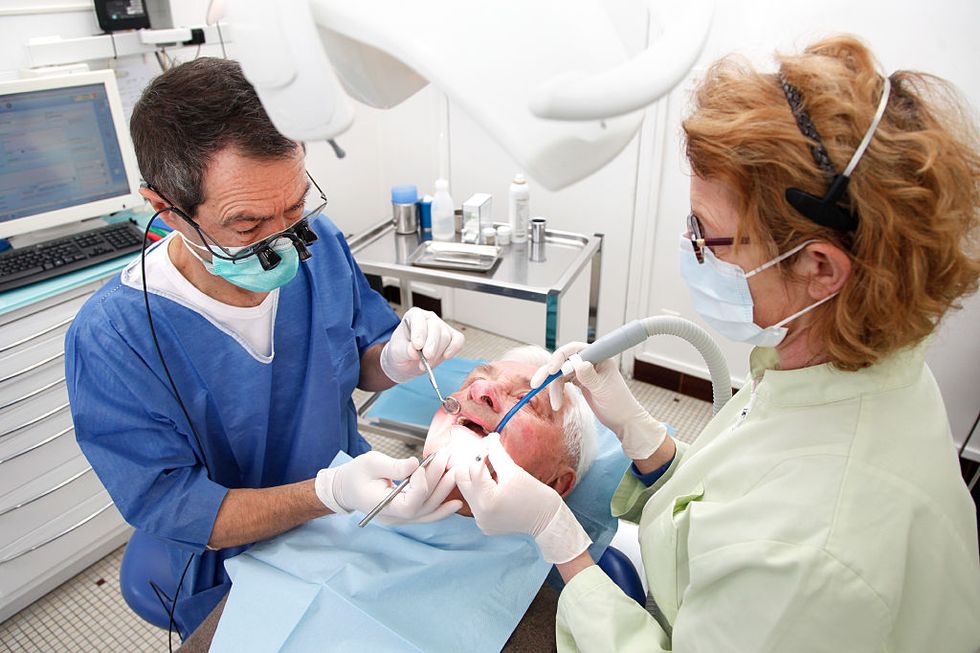 Senior person at the dentist. (Photo by: BSIP/UIG via Getty Images)

Imagine if you could fix your sweet tooth with a drug instead of a drill. It could happen. Researchers have discovered that Tideglusib, a drug in clinical trials for Alzheimer’s and other neurological disorders, repairs cavities in mice by promoting the natural regrowth of tooth material. Humans could be next.

Today, when a cavity forms in a tooth, a dentist repairs it by drilling into the tooth to expand the hole, then patches it with a material made using a compound material that includes silicon or calcium-based aggregates. In the foreseeable future, that cavity could be repaired with a sponge soaked in Tideglusib, which stimulates the tooth’s own stem cells to create new dentine — the substance beneath tooth enamel that's eroded by decay when a cavity forms. The process takes about six weeks.

“It was essentially a complete repair,” said Paul Sharpe, a bioengineer at King’s College London whose team used the treatment successfully in trials on mice and on rats. “You can barely see the joint where the old and new dentin meet. This could eventually be the first routine pharmaceutical treatment in dentistry.”

The team still needs to do trials on humans and experiment with other similar drugs to make sure Tideglusib is the best fit and has no side effects. A treatment method will need to be designed as well. One possible version of the treatment for humans could involve injecting a gel version of the drug into a cavity and heat-sealing it with ultraviolet light.

“This is not just scientifically important, but has significant practical advantages," said Adam Celiz, an assistant professor of bioengineering at Imperial College London. “The materials dentists use could soon be revolutionized.”

Regenerative dentistry is a new field that puts the focus on repairing natural teeth rather than replacing them with synthetic materials. Other treatments on the horizon include an alternative to root canals in which biomaterials are placed in direct contact with tooth pulp tissue to stimulate the native stem cell population to repair and regenerate the pulp tissue and the surrounding dentin.

Another future development in dentistry could be tooth banking. Scientists studying the power of stem cells in placentas and umbilical cords realized that babies shed another important source of stem cells: teeth. Baby teeth, wisdom teeth, and even adult molars contain stem cells that can be used to grow new tissue and bone. Future advancements could bring about a scenario in which parents send their children’s baby teeth not to the tooth fairy, but to a cryogenic bank where their stem cells could be harvested and preserved until needed at some future date.

Tooth banking costs more than the average tooth fairy visit: Under $2,000 for the initial processing and $120 a year afterwards, but most tooth banks charge one fee for all teeth. (Most people have 20 baby teeth.) The downside: A tooth that has naturally fallen out can’t be preserved in time. Instead, baby teeth have to be removed by a special dentist who can immediately preserve the tooth so the stem cells don’t deteriorate.

The pulp of the tooth, where the stem cells are located, is removed, disinfected, digested with an enzyme, and the cells are cultured and preserved.Tooth banking is still in its early stages, and treatments that use stem cells from teeth have yet to emerge, but companies like Store-A-Tooth, Tooth Bank and BioEden are betting that parents believe that medical technology will come through for their children.

In the meantime, while we wait for science to catch up, dentists continue to make the same recommendations: Brush your teeth after every meal, and don’t forget to floss. You only get one chance to take care of your adult teeth—for now.