The Internet of Things Is Creating a Smarter, More Connected World 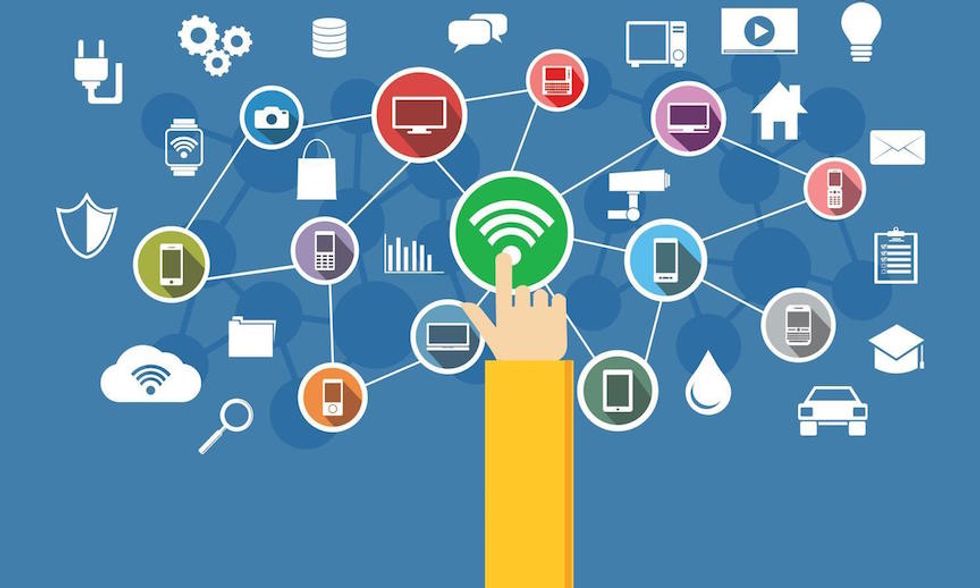 I recently bought myself a "smart" wrist band to record how much exercise I was getting simply by commuting to work and walking around. A straight-forward and helpful enough concept, but it occurred to me that with the act of putting on the bracelet, I'd actually connected my physical activity to a data network tracking just about everything I do and possibly everywhere I went. The technorati have dubbed this new network the "Internet of Things"--and my wristband and I are now a part of it.

The IoT is the wireless revolution that quietly and rapidly is connecting the physical world with the ether world. As microchips shrink in size yet grow more connected, they increasingly integrate inanimate objects --machines, appliances, buildings, vehicles, clothing, even soil--to bring them to virtual life. In this new brave new technological world, everything becomes connected to everything else.

The IoT marks a point in our development where birds twitter as well as tweet, and books facetime you asking if you'd like to pick up where you left off. SingularityHUB’s Jason Dorrier explains, “This enormous new digital network will mirror the internet in the material world. It will be a massive grid of interconnected nodes collecting information, executing commands, and just generally chattering away to each other day and night.”

Jason Silva, host of the Youtube series Shots of Awe, explains that the IoT “will rattle the imagination” as “ it promises to blur the distinction between self and world.” He expands:

"[N]ow that we are extending intelligence sensors into everything, into the world of everyday objects, all of these ‘things’ are going to be endowed with agency, the ability to give us feedback. The world is going to become intelligent, responsive and anticipate our needs.” A remote will inform its owner of low batteries; a refrigerator will generate a shopping list when it is low on supplies; a remote alarm on your phone will cause the coffee pot to activate.

If social media is "the Web of People," the IoT will operate atop this, allowing any object to be “seen” by a computer. TechRepublic predicts that soon society will “convert ‘things’ to becom[e] ‘smart’ web connected devices that create, store, and share data.”

The process of transforming an ordinary item into an Internet “thing” is actually quite simple: As long as it bears a unique identity, a wireless connection via a microchip, and any or all of the five senses (to capture images, to smell smoke, etc.), an object may join this the Internet as a “thing.”

I'm reminded of what philosopher and prophet of the digital age Marshall Mcluhan once wrote: “If the work of the city is the remaking or translating of man into a more suitable form than his nomadic ancestors achieved, then might not our current translation of our entire lives into the spiritual form of information seem to make of the entire globe, and of the human family, a single consciousness?” Taking this further, then, might not the IoT bridge the next gap between consciousness and the physical world?

I can't help but recall, too, Dr. John Barrett’s TEDx Talk, who likens this next step to Star Trek’s Tricorder. With these devices, users interface with any object in “learn mode” to discover more about it. A piano, for example, could "tell" you who last played it, and what tune. On "health mode" the Tricorder could monitor human vitals and the progression of an illness, without the need for an in-person patient visit. The same technology already can locate a house key, an Apple remote (mine is constantly buried in my couch), or even teenager out past curfew, assuming they're willing to be tagged.

This may sound quite futuristic, but in fact the IoT is already here and spreading rapidly. We already program our DVRs from a distance, monitor our pets and todlers with nanny cams, and even change the temperature on a home thermostat from our phones. Current estimates by Cisco state that in 2013 there were 9 billion connected "things," but by 2020 there will be 50 billion connected devices. I'm betting it's much more than that.

This technological advancement comes with some startling intrusions on our privacy. I've only just begun to adjust my own social media posts, knowing that potential employers, and worst still my parents, are trolling social networks. But what happens when our very belongings also join the conversation? Will my wristband broadcast to the world that I sat on my couch and watched 16 hours of a Netflix House of Cards marathon? After all, Facebook began as a place for digital dating and photos of underage drinking, but morphed into an ubiquitous tool to communicate with lost friends, market products, and connect celebrities to fans. The Library of Congress even secured the right to archive Twitter in 2010, meaning nothing is ever truly going to be gone once posted. Retailers will quickly learn things about me from the way I use smart things. It's a marketer's dream, but privacy advocates no doubt will be working overtime.

These “things” also will guide us in our everyday decisions. President of SAP Platform Solutions Steve Lucas showcased a "smart" vending machine that communicates with mobile devices to help consumers choose the best snack based on workouts, past purchases, and personal preferences. A new "smart mattress" called Luna monitors sleep patterns, controls ambient temperatures based on body heat, and wakes users after they achieve sufficient REM sleep. These smart objects boast “intelligence and predictive know-how” to aid consumers to make smarter choices in less time. Instead of objects simply working for us, as shovels and automobiles have, they will work with us to troubleshoot and course adjust efficiently in real time. It will be as if the whole world is your personal concierge. This may sound terribly convenient, but I wonder: Does it also risk undermining human self-sufficiency and the personal growth that comes from decision-making, especially bad decision-making? If the things always know me better, do I get to have a say in how my day, my week, my life goes? We might all have to draw a careful balance between what we know and do from experience, and what the "things" around us say and suggest.

On the bright side, in the near future, the roses might just remind us to stop for a moment and smell them.