Arachna-pharmia: Coming Soon to a Medicine Cabinet Near You?

Spider venom may hold the secret to cures for all that ails us — except for arachnophobia. 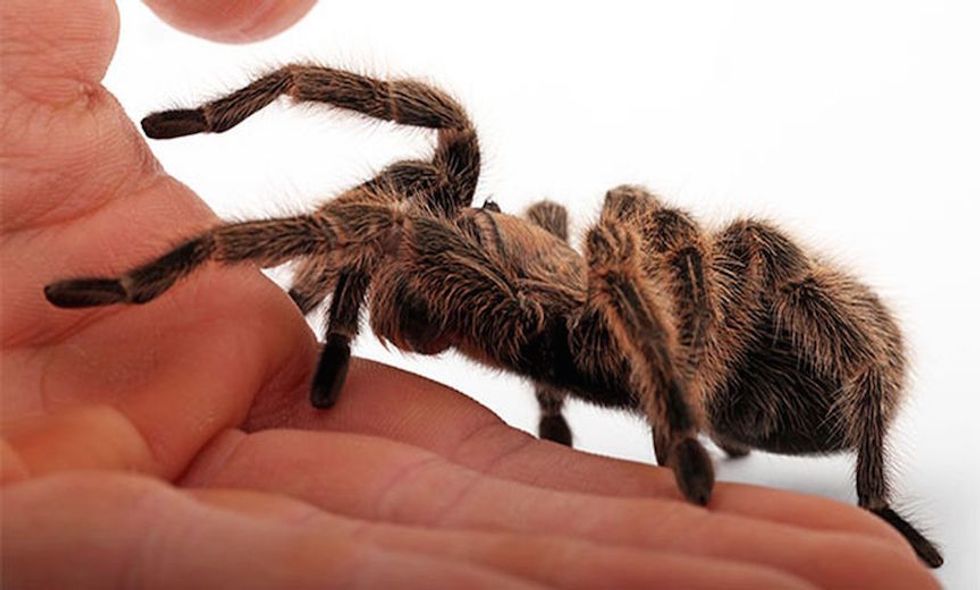 On March 21, 2016, the Centers for Disease Control issued its first-ever recommendation to limit the prescription of habit-forming painkillers such as Vicodin and OxyContin, noting that about 40 Americans die each day from overdosing on prescription painkillers and an estimated 1.9 million people are addicted to prescription opiates. The problem of painkiller addiction has reached epidemic proportions.

But pain is real. In an increasingly urgent quest to find effective, non-addictive painkillers, scientists have turned to a widely feared creature whose bite can kill: spiders. Scientists in Brisbane, Australia, have discovered that the venom of the Peruvian green velvet tarantula contains ProTX-II, a powerful peptide toxin that inhibits pain sensation receptors.

"It binds to the pain receptor located within the membrane of neuronal cells, but the precise peptide-receptor binding site and the importance of the cell membrane in the inhibitory activity of ProTx-II is unknown," said Sónia Troeira Henriques, senior research officer at the University of Queensland's Institute for Molecular Bioscience.

It’s not a stretch to understand why it works: Spider venom contains a strong neurotoxin that enables it to paralyze or even kill its prey so that it can more easily feed on it. Even if we are not a reasonable prey for spiders, humans have long noted the localized numbness that often results from spider bites.

While spider venom painkillers are still several years away from the marketplace, scientists see great potential for a low-risk, low-side effect medicine based on the properties observed in the venom of spiders and other venom-bearing creatures. The Peruvian green velvet tarantula is just one of many spiders that could be the foundation of a new generation of

painkillers. Thousands of different species of spiders possess unique venom formulas, as do snakes, frogs, lizards and other insects.

Researchers at Columbia University have developed the world’s first therapeutic venom database, known as Venom Knowledge Base (VenomKB). By evaluating 5,117 studies which described the potential for venom to treat a range of conditions, including cancer, diabetes and obesity, they have been able to document over 42,000 effects on the body.

In Britain, researchers have isolated another spider venom peptide, PnTx2-6, that appears to possess analgesic properties. They are also studying it as a possible cure for erectile dysfunction. Spider venom from the Togo starburst tarantula has been tapped to treat epilepsy, and the Australian funnel-web spider’s venom is an ingredient in a promising candidate to treat stroke victims.

Venom is also an ingredient in an insecticide. Vestaron Corporation makes a venom-based insecticide that doesn’t linger in the environment, appears not to harm bees, and has won approval from the Environmental Protection Agency. Based on the venom of the Australian Blue Mountain funnel web spider, Vestaron’s Spear biopesticide products are being used to control insects in greenhouse settings where high-value crops need protection. However, spider venom-based pesticides are not yet cost-effective enough to use in field settings; as one might imagine, venom is expensive stuff.

To obtain sufficient quantities of spider venom to use in large scale pharmaceuticals and agriculture, scientists are turning to synthetic biology. Milking a spider for its venom yields only a hundredth to a thousandth of a millimeter of usable material. By using synthetic biology, however, scientists can manufacture venom proteins in significant quantities, beginning with a direct-from-the-spider sample and using yeast to ferment and replicate those proteins.

While spiders may hold the cure for pain and other problems, the rise of scientific methods to save us from wide-scale spider farms may be something of a relief.