This Tweet From A Wealthy Passenger On SpaceX's Trip To The Moon Just Became That Most Retweeted Tweet Ever, and We See Why 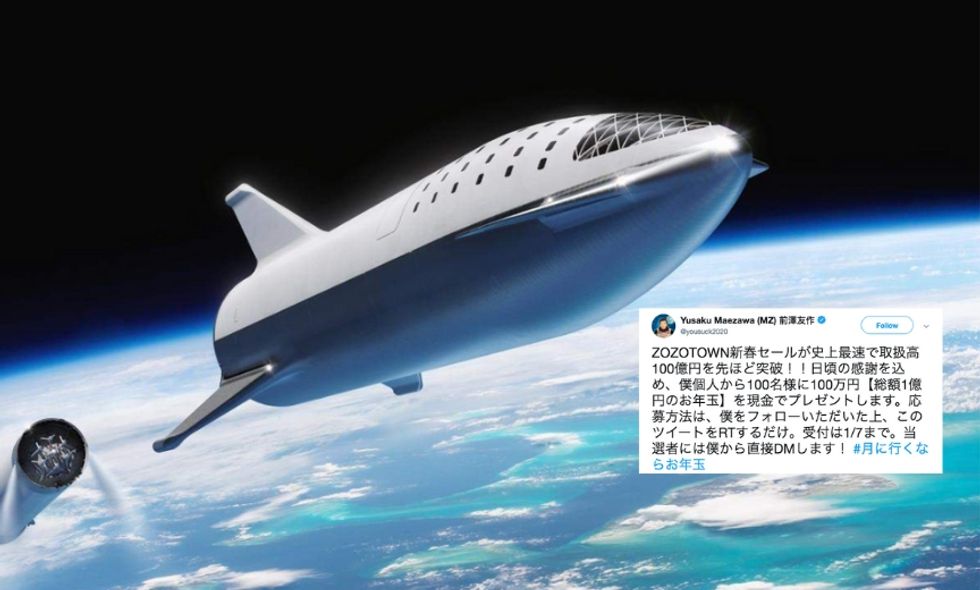 From a star-studded selfie to a kid who just wants some nuggets, Twitter users have often mobilized to magnify content, creating some of pop culture's most notable moments.

While those have previously held the records for most retweets ever, they've just been dethroned by Japanese billionaire Yusaku Maezawa, founder of the clothing company Zozotown and a soon-to-be passenger to the moon via Spacex's space tourism initiative. With the incentive Maezawa is offering, it's easy to see why his tweet went viral.

The tweet features a Japanese New Year's card and translates to:

"Zozotown's Spring Sale is the fastest in history and topped 10 billion yen!! As a daily appreciation, I will give 100 million yen (total of gifts million yen) in cash. The only way to apply is to follow me and RT this tweet. The reception is up to 1/7. I will direct DM from me to the winner!"

The sum of 100 million Yen converts to nearly one million dollars. Spread over 100 people, the amount distributes to about 9.2 thousand dollars. As a result, the tweet has been retweeted over five million times—over a million more than the previous recordholder.

With such a decent chunk of change, many are eager to get in on the action.

This tweet is just the latest feat of Maezawa's to captivate the world.

Earlier this year, Spacex founder Elon Musk revealed that Maezawa will be the first private passenger to take a trip around the moon.

For his part, Maezawa plans to take artists along for the ride in an effort to capture the moment from various creative perspectives.

A website for the project—entitled #dearmoon—went live shortly after the announcement, with a stunning description:

"A painter, musician, film director, fashion designer...Some of Earth's greatest talents will board a spacecraft and be inspired in a way they have never been before."

He's often discussed the preparations and whom to take. He hopes to make the journey as soon as 2023.

Others are eager to see it take off.

We'll be watching the skies.