Why Coal Is Not Coming Back, Despite What Donald Trump Says 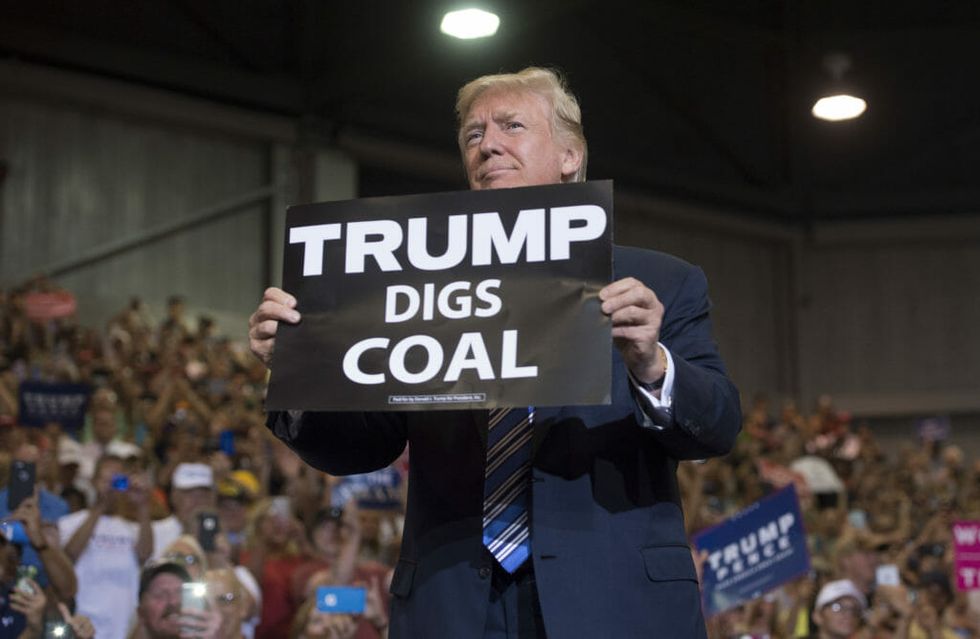 Once the king of the energy sector, coal is being rapidly outpaced by renewable energy sources. Expanding investment and development in solar and wind power will not only influence how electricity is generated, but also grant consumers access to cleaner, sustainable energy options. Solar power and wind power, which have been the cornerstones of the renewable energy movement, will account for 50 percent of all generated power by 2040, according to a Bloomberg report.

Renewable sources of energy, like solar and wind power, have seen vast improvements in efficiency, and, perhaps most importantly, the substantial decreases in production costs are giving consumers more options. Innovations in renewables are reshaping the domestic and international energy markets, and are beginning to render coal and natural gas obsolete. These trends also buck President Donald Trump’s campaign pledge to “bring back coal,” a key promise which helped deliver him an electoral college victory over Hillary Clinton.

For the first time ever, solar power usage increased faster than all other fuel sources in 2016, demonstrating an ever-growing demand for clean, renewable energy. In the United States, solar power generates 47.1 gigawatts of power annually — enough to power 9.1 million American homes, according to the Solar Energy Industries Association. In the second quarter of 2017 alone, more than 2.7 gigawatts of solar power were added to the American power grid, with an additional 12 gigawatts of solar capacity anticipated by the end of 2017.

In 2016, the American solar industry employed 260,077 people, compared to only 100,000 in 2011, according to the National Solar Jobs Census. Solar jobs have increased 20 percent per year since 2010, and in 2016, the solar industry added $84 billion to the GDP of the United States. In fact, the solar industry accounted for 2 percent of all new jobs created in the United States in 2016, with an additional 10 percent growth expected in 2017. Although the most advanced solar panels are only 22.5 percent efficient, solar energy produces no waste, can be stored, and is 100 percent renewable. As efficiency improves and costs decrease, demand for solar power will continue to increase.

Solar power is showing tremendous success for regions where it’s being harnessed on individual scales, too. In Germany, for example, focus has largely been on individual homes and businesses generating their own power from solar panels. As of 2017, 1.7 million solar systems are privately owned, enabling consumers to generate and store their own power. Advances in solar storage battery technologies, such as the German sonnenBatterie and the Tesla Powerwall, are now allowing solar power to be efficiently stored (photovoltaic panels generate power, but can’t store it). In 2016, renewables accounted for 29 percent of all of Germany’s energy production. In September 2017, Senators Al Franken (D-MN) and Martin Heinrich (D-NM) introduced theAdvancing Grid Storage Act, which would accelerate investments in energy storage systems, enabling solar and wind power to be saved as a source of backup power.

Wind Power Is On The Rise Too

Wind power is free, renewable, unlimited and produces no pollution or waste. Advances in wind turbine design are resulting in increased efficiency; turbines inspired by insect wings have yielded a 35 percent increase in efficiency Wind power can be generated at the individual level, too. Typical wind turbine output, or “capacity factor,” depends on the speed of the wind. On average, wind turbines produce electricity 70-85 percent of the time.

Fun fact: wind power is just another form of solar power. Winds are created by the heat of the Sun and the rotation of the Earth. Like solar, demand for wind power is creating a surge in jobs. As of 2016, the US wind sector employed around 100,000 people. This number is expected to increase to 600,000 by 2050, according to the United States Department of Energy. Impressively, a wind turbine service technician is the fastest growing job of the decade, and wind power contributes $20 billion annually to the US economy. As of 2016, the United States has more than 52,000 wind turbines generating 82,143 megawatts of electricity, which is enough to power 25 million homes. Wind power is also a boon to rural communities, as farms and ranches have ample space and wind. Farmers are also compensated for the use of their land for wind turbines.

Coal, on the other hand, is declining at ever-increasing rates. The coal industry employed 65,971 miners in 2016, nearly four times fewer workers than the solar industry. In Colorado, for example, Xcel Energy is considering closing two of its coal plants nearly a decade early, due to increasing demand and falling costs for solar, wind, and natural gas. Xcel estimates that wind power will account for 40 percent of its energy output by 2026, compared to 23 percent in 2016. In Australia, coal plants are closing at a rate that could completely eliminate all coal production by 2040, which scientists insist is a necessary step in combating climate change.

In the United States, coal is the second-most used source of energy, accounting for 30 percent of all power generated and consumed. Just five states produce 70 percent of all the US’s coal. Natural gas comprises 33.8 percent of the energy market, giving it the majority share for the first time in 2016. Although overall energy use increased, American coal consumption fell 9 percent in 2016, due to growth in solar, wind, natural gas, and nuclear power. American coal efficiency ranges from 33 to 40 percent, and Japan leads with average 41.8 percent efficiency.

Coal production is responsible for 68 percent of all American greenhouse gas emissions; in 2016, coal consumption resulted in 1,241 million metric tons of carbon dioxide getting released into the atmosphere. Carbon dioxide traps heat from the Sun, and as such, increased levels of atmospheric CO2 is the leading cause of man-made climate change.

Natural Gas Is Clean Though, Right?

Natural gas is the primary source of energy in the United States as of 2016, taking up 33.8 percent of the market. Found deep inside the Earth’s crust, natural gas is a fossil fuel mainly composed of methane (CH4). Burning natural gas produces carbon dioxide and water vapor, but its CO2 output is 45 percent less than that of coal. Unlike coal, however, natural gas doesn’t release particulate pollutants into the atmosphere. The United States has enough reserves of natural gas to last 86 years, thus making it cleaner than coal but non-renewable and unsustainable. Once it reaches homes and businesses, natural gas is about 90 percent efficient, though only about a third of mined methane energy leaves the processing plants.

Natural gas causes the most environmental damage from its harvesting process, known as fracking. Fracking, which is short for hydraulic fracturing, involves drilling deep into the Earth’s crust. High-pressure water is used to break through the subterranean shale, releasing methane into the atmosphere. Fracking is also responsible for polluting groundwater. Although it exists in smaller quantities in Earth’s atmosphere, and despite it breaking down faster than carbon dioxide, methane is the most harmful greenhouse gas because of its ability to retain heat. In fact, methane waste from industrial agriculture is a primary driver of climate change.

Looking Toward The Future

Renewable sources of energy continue to capture increasing shares of the global energy market, and this is crucial in humanity’s continued efforts to curb the effects of climate change. Not only are fossil fuels responsible for warming the Earth nearly 1 degree Celsius since the Industrial Revolution, atmospheric CO2 levels have increased from 250 parts per million to 400 parts per million. Consequently, the world’s fossil fuel reserves will not last much longer. Oil giant BP estimates enough coal to last until 2169, enough natural gas to last through 2068, and only enough oil to last through 2066. It is therefore imperative for clean, renewable sources of energy to replace fossil fuels as quickly as possible.