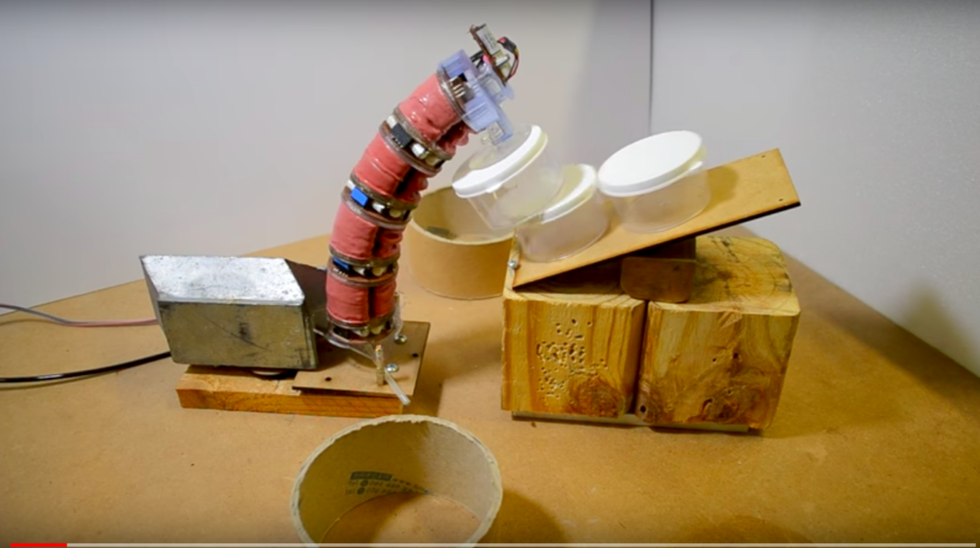 A group of researchers in Brussels have designed soft robots that can heal themselves when damaged, and another group of robotic engineers in Paris have built robots that can adapt their behavior when broken — two attributes once believed beyond the domain of robotic life. Both groups were inspired by their observations of nature, be it the healing characteristic of living organisms or the adjusting behaviors of injured animals, and they built their machines to mimic those attributes.

Like most living organisms, humans have the ability to heal. We scrape our elbows, feel the sting of a paper cut, pull or tear a muscle during a game, or we are one of 6.8 million people in the United States who break or fracture a bone each year. Thankfully, in most cases, we heal without any external aid or influence.

A team of five scientists at Vrije Universiteit in Brussels, Belgium, seek to endow soft robots with this same self-healing property with the use of synthetic materials. The scientists used elastomer, a flexible polymer with elastic properties more commonly known as rubber, in the construction of three self-healing soft pneumatic robots that imitated a hand, a gripper, and muscles.

Soft robots are built to be flexible and durable for a number of purposes, including interaction with humans, handling of delicate objects, moving through small spaces or across rough and unexpected terrain, and absorbing the shock of impact in active and unpredictable environments. But these same tasks leave the elastomer material vulnerable to irreparable injury, including cuts, perforations and tears resulting from wear during operation.

The Brussels team solved this problem by building their soft robots with a specialized, self-healing elastomer that uses heat  to heal both microscopic and macroscopic damage Self-healing polymers are relatively new, though they have already appeared in such commercial applications as, target practice products, civil engineering construction, aerospace applications, and cars and mobile phone covers that can automatically fix minute scratches. Soon we will even see self-healing polymers developed for artificial skin and human prostheses.

The scientists used a Diels-Alder polymer for their robots, which is manufactured using a chemical process that creates a thermoreversible covalent network in the composition of the polymer itself. “Thermoreversible” is exactly as it sounds — it is the ability of a substance to revert to a previous condition after exposure to heat. Therein lies the magic of these new soft robots. When their elastomer was damaged during the team’s experiments, whether by puncture or tear, the scar healed with no signs of weakness after applying a mild heat treatment.

The research team now seeks to develop and implement an autonomous self-healing mechanism into the robots so that they can repair with no external influence (i.e. humans or other machines), or heat their own damaged components themselves.

And Robots that Learn...

Another team in Paris also wants to give robots further autonomy by teaching them how to learn and adapt. Antoine Cully, Jean-Baptiste Mouret and Danesh Tarapore of UPMC (formerly Universite Pierre-et-Marie-Curie), in collaboration with Jeff Clune of the University of Wyoming, are a team of robotic and software engineers who were inspired by animals' ability to adapt to injury. Their research cites three-legged dogs and humans with sprained ankles who learn to adjust their walk.

“When injured, animals do not start learning from scratch," said senior author Jean-Baptiste Mouret. "Instead, they have intuitions about different ways to behave. These intuitions allow them to intelligently select a few, different behaviors to try out and, after these tests, they choose one that works in spite of the injury. We made robots that can do the same.”

Much like the team in Brussels, Mouret’s team focused on the fragility of robots, in this case their inability to recover from damage via compensating and improvising behaviors. Their solution was to introduce a trial-and-error algorithm into the software of two robots that gifts them with the ability to adapt.

The algorithm works in two steps. First, it builds a map of all possible behaviors, movements and performances in a designated space and sets this information aside as “prior knowledge.” In the event of an injury, the algorithm uses the prior knowledge to enable the robots to adapt and compensate. The team demonstrated the effectiveness of the algorithm by breaking two legs of a six-legged robot, and several motors on a robotic arm. Both were still able to complete their assigned tasks in a matter of minutes. Additional experiments of various types of broken, damaged and missing components showed successful adaptation.

"Each behavior it tries is like an experiment and, if one behavior doesn't work, the robot is smart enough to rule out that entire type of behavior and try a new type," said lead author Antoine Cully. "For example, if walking, mostly on its hind legs, does not work well, it will next try walking mostly on its front legs. What's surprising is how quickly it can learn a new way to walk. It's amazing to watch a robot go from crippled and flailing around to efficiently limping away in about two minutes."

...Give Rise to the Autonomous Machine

Tarapore believes that continued study of injury adaptation and further development of the trial-and-error algorithm will reduce the continuous attention robots need for repair, making them more productive and effective, and less of an annoyance. The endgame, of course, is the rise of more autonomous robots.

Professor Bram Vanderborght, one of the researchers on the Brussels team, is also excited by the prospect of an industry of independent machines.

“The outcome of the research opens up promising perspectives. Robots can not only be made lighter and safer, they will also be able to work longer independently without requiring constant repairs.”

For more information on the respective research publications:Science Robotics, Nature