Scientists Have Observed Snowstorms on Mars 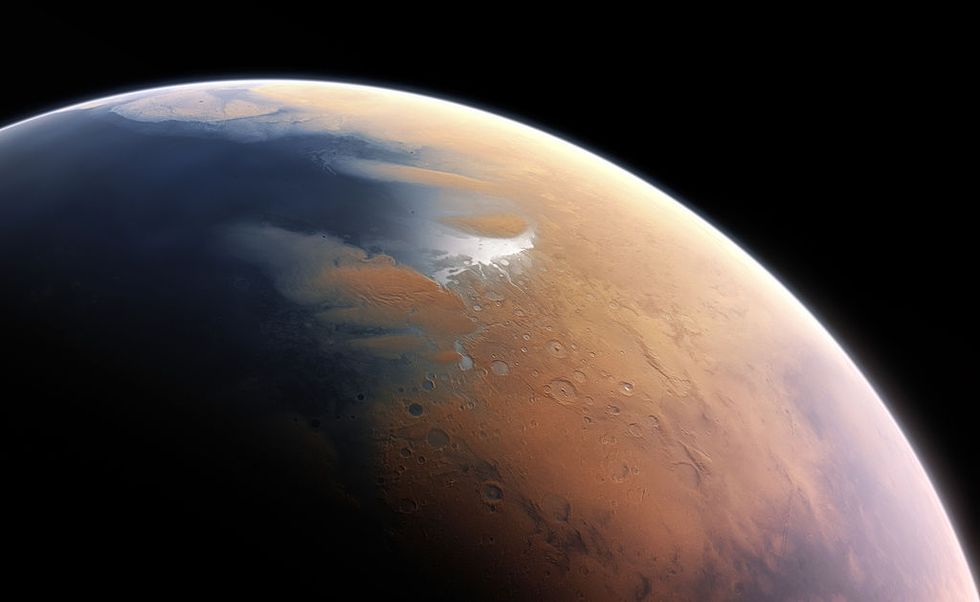 Earth is not the only planet in our solar system with dynamic weather patterns. All eight planets have unique atmospheric activities. New evidence observed on Mars shows intense snowstorms forming during the Martian night.

Because Mars has 99% less atmosphere than Earth, its temperature differences are much more pronounced. Semi-diurnal atmospheric tides cause the Martian atmosphere to experience temperatures shifts of up to 58 degrees Fahrenheit. Atmospheric tides are caused by heating from the Sun and cooling at night. Recent observations, however, reveal how atmospheric tides cause violent nighttime snowstorms on Mars. As the atmosphere cools, water-ice particles in the upper atmosphere freeze and begin falling toward the surface as ice pellets. This creates violent blasts of winds known as microbursts, which also occur on Earth. Water vapor in the Martian atmosphere was previously thought to be too sparse to enable accumulating precipitation. Any snow that happened to reach the surface was assumed due to gravity. According to Armin Kleinboehl at NASA’s Jet Propulsion Laboratories, however, Mars has more water vapor in its upper atmosphere than Earth does in its upper atmosphere. This allows for more heat to be trapped and more precipitation to form.

Planetary scientist Aymeric Spiga of the Université Pierre et Marie Curie in Paris, whose team discovered the snowstorms, ran simulations based on decades of observational data returned from the Mars Reconnaissance Orbiter and Mars Global Surveyor. “It’s the first time anyone has shown that snowstorms, or water-ice microbursts, occur presently on Mars,” Spiga said. The closer to the ground the cloud, the more intense the precipitation and wind, and the more likely the snow is to reach the surface, Spiga explained.

In 2008, NASA’s Phoenix lander observed light snowflakes emanating from thin, wispy clouds in the Martian atmosphere. These clouds, referred to as virga streaks, are present in Earth’s upper atmosphere as well. Like Earth’s cirrus clouds, Martian virga streaks are precipitation from clouds that fail to reach the planet’s surface before evaporating or sublimating, a process in which frozen material is quickly heated into a gas. Based on the team’s simulations, Spiga concluded that the atmospheric tides on Mars are strong enough to cause snow to fall hundreds of times faster than was observed by Phoenix.

Carbon dioxide snow was also observed by the Mars Reconnaissance Orbiter in 2012. These findings will help scientists understand the Martian water cycle, and will have implications for future exploratory missions and human settlements on Mars.