Some our 'human' DNA comes from ancient alien viruses that colonized our ancestors’ bodies millions of years ago, in part shaping our evolution. 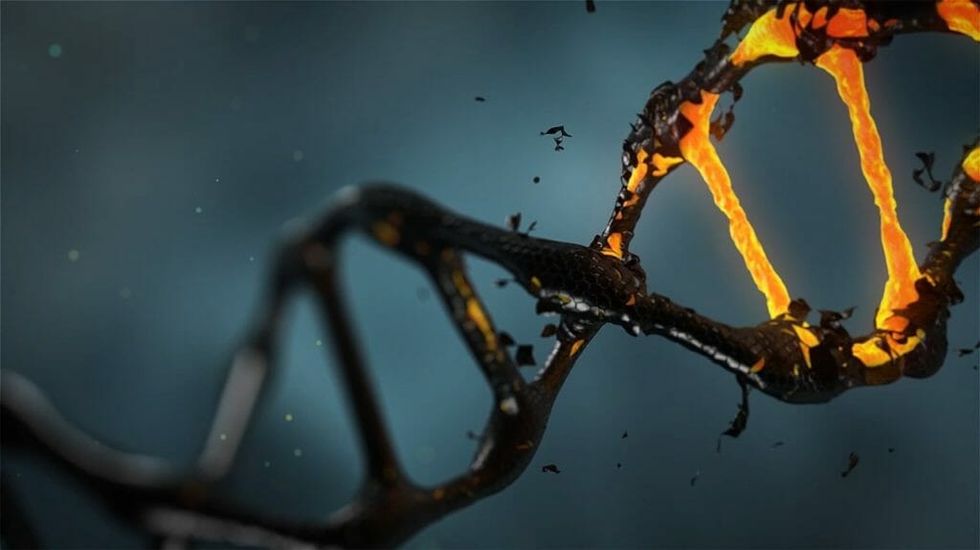 Scientists discovered a strange and foreign protein, which they named HEMO, in the blood of pregnant women. What makes this protein unusual is that the mothers-to-be do not create this protein, which is different than other proteins found in a person’s bloodstream. Instead, only the fetus and the placenta, both in the womb, produce the HEMO protein. While investigating the reason for this, the scientists discovered a direct link between the protein and a human gene that originally was a virus that infected our mammalian ancestors more than 100 million years ago.

In fact, research has found that around 100,000 bits and pieces of alien, as in not-originally-human, viral DNA now makes up about eight percent of our DNA. That means that eight percent of the genetic material that determines who we are as biological human being descends not from our human ancestors, not directly at least, but instead from ancient viruses. In comparison, that is more inherited DNA than any of your great great grandparents provide, which is about 6.25 percent.

University of Oxford virologist Aris Katzourakis and his colleagues published in the journal Trends in Microbiology an exploratory discourse on the subject, titled “Roles of Endogenous Retroviruses in Early Life Events.” The brief article explains:

“A retrovirus that infected our ancestors 100 million years ago became a human gene that is expressed in embryos and cancers, and can be detected in the blood of pregnant women. Accumulating evidence suggests potential roles for endogenous retroviruses in early life events, which may affect adult health. [...] This reverse genetic flow has facilitated the colonization of vertebrate genomes by retroviruses, a process that we know has been active for at least 450 million years. Known as endogenous retroviruses (ERVs), these abundant genomic parasites comprise 8% of the human genome.”

We could use the myth of Adam and Eve eating a fruit plucked from the Tree of Knowledge as an allegory to better understand how these viruses enabled our ancestors to rise up as humans on this Earth. Imagine the seeds of the fruit as viral DNA, genetic coding that in a sense is “knowledge,” and the consumption of the fruit as an incorporation of that foreign genetic coding.

The bite becomes symbolic of the viral infections — an invasion of our ancient ancestors’ bodies by viruses that then replicated and perpetuated themselves inside our mammalian ancestors with each generation. Eventually, over centuries and then millennia, these viruses became part of our ancestors' genetic make-up — what would become the human genome — changing who humans are at the chromosomal level. We find ourselves looking at the gradual evolution of humanity through genetic trial and error.

Retroviruses Coded Some Of Our Evolution

One theory gaining evidence is that these viruses, specifically a group of viruses known as retroviruses, are responsible for some of our biological developments in evolution. A retrovirus is any virus that integrates its viral DNA into the host cell’s own DNA, which allows the retrovirus to both replicate itself and also permanently insert its genetic code into the DNA genome of the infected cell. The Human Immunodeficiency Virus (HIV) is one such retrovirus.

The New York Times explains that if a retrovirus infects an egg or sperm cell, its DNA can be passed on through the human host’s descendants. Scientists refer to these “inherited stowaways” as endogenous retroviruses, and over many generations they eventually lose their ability to infect new cells, though they remain part of the human genome.

One of the evolutionary benefits gained from a retrovirus is the placenta found in pregnant mammals. Tufts University School of Medicine virologist John M. Coffin published a paper regarding the emergence of placental mammals due to endogenous retroviruses:

“Endogenization of retroviruses has occurred multiple times in the course of vertebrate evolution, with the captured retroviral envelope syncytins [proteins] playing a role in placentation in mammals, including marsupials.”

The placenta is a flattened organ found in the womb that connects the fetus to the uterine wall, and provides nourishment to the fetus. The newly-discovered protein HEMO is a remnant of an ancestral endogenous retrovirus that provided the genetic instructions that tells the body to create a type of viral protein known as a syncytin. These syncytins bond placenta cells together when a woman becomes pregnant -  a vital step in fetal development.

The Good, The Bad, and the Virus

The question researchers are now trying to answer is how have these viruses affected our health. Are the DNA remains of these genomic colonizers merely fossils, having lost their function over time, or are the ancient viruses still actively involved in our early development?

“It’s not an either-or — are these things good or bad? It’s a lot more complicated that that,” said Katzourakis in an interview. “We’re barely at the beginning of this research.”

While some of these viruses might protect us from disease, others might cause cancer. Scientists have found viral proteins, produced by endogenous retroviruses, in many types of tumors cells, and a team of French researchers discovered a viral protein that can activate genes linked to cancer.

But Coffin speculates the viral proteins are randomly activating human and viral genes alike. He also points that many ancient viruses have been domesticated by our ancestors, and that our bodies now make essential proteins from endogenous retroviruses that we are dependent on. Others offer protection against other viruses, and we already know the roles of syncytins in placental development. “My speculation is that without syncytins, mammal evolution would have looked very different,” said Coffin. He hopes to discover just how intertwined our history, and our future, is with viruses.

"This research provides important information necessary for understanding how retroviruses and humans have evolved together in relatively recent times."