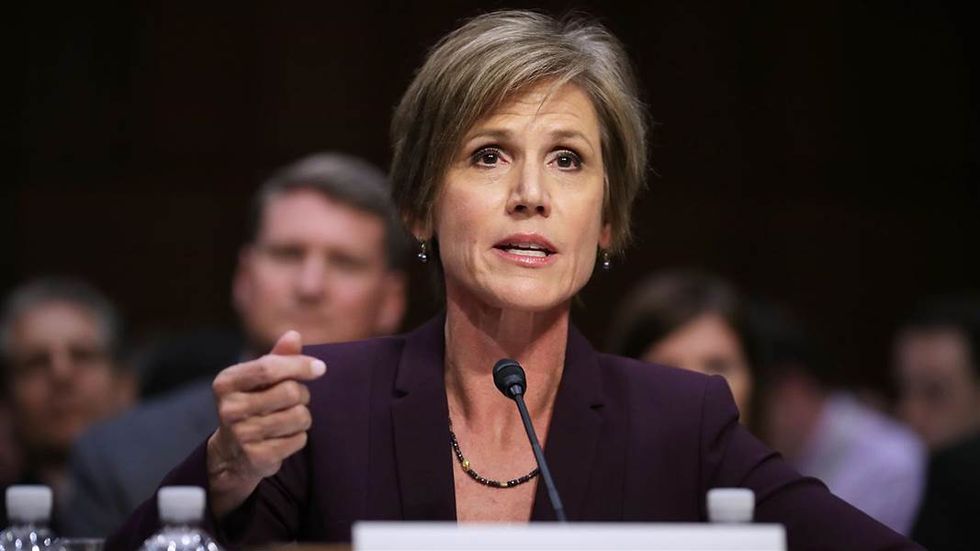 On Monday, in dramatic testimony, former acting Attorney General Sally Yates testified in front of the Senate Judiciary Committee about her decision not to defend President Trump's initial travel ban and about her meetings with the Trump administration warning them that Michael Flynn, then serving as Trump's National Security Advisor, was lying about his contacts with Russian officials.

Yates explained that on January 26, just days after President Trump's inauguration, she and a career Justice lawyer met urgently with White House counsel Donald F. McGahn II to explain that Flynn was lying when he claimed he had not discussed the Russian sanctions with the Russian ambassador to the United States, Sergey I. Kislyak.

“We felt like it was critical that we get this information to the White House, in part because the Vice President was unknowingly making false statements to the public, and because we believed that General Flynn was compromised with respect to the Russians,” Yates said. "To state the obvious: You don’t want your national security adviser compromised with the Russians.”

But that warning was not heeded. President Trump would keep Flynn on as National Security Advisor for another 18 days until he finally asked for and received Flynn's resignation on February 13, only after Yates's warning to McGahn came to light.

So the question remains, why did President Trump keep Flynn on as National Security Advisor so long after they were told he was compromised?

To read more, continue to page 2.

For many, the White House has not offered an adequate explanation for the delay. Sean Spicer at the time portrayed Trump as acting swiftly, saying “It would be unbelievably shortsighted and wrong to go in and dismiss someone immediately. In fact, what the president did was take decisive action to make sure that the White House counsel thoroughly reviewed and vetted the situation. He took immediate, decisive action.”

But critics have pointed out that this doesn't address why Trump failed to ask for Flynn's resignation until Flynn's lies about his Russian contacts and Yates's warning to the Trump administration were made public by The Washington Post.

Yesterday, during the Senate Judiciary Committee hearing, Senator Franken offered an alternative theory for the delay.

“We’re trying to put a puzzle together here, everybody,” Franken said. “And maybe, just maybe, he didn’t get rid of a guy who lied to the vice president, who got paid by the Russians, who went on Russia Today, because there are other people in his administration who met secretly with the Russians and didn’t reveal it until later—until they were caught. That may be why it took him 18 days—until it came public—to get rid of Mike Flynn, who was a danger to this republic."

Yates wasn't the only one to warn the Trump administration about Michael Flynn. We also learned on Monday that, back in November, then President Obama had cautioned Trump against hiring Flynn. Clearly, that warning was not heeded either and further calls into question President Trump's judgment when it comes to Michael Flynn.