What Our Planet Earth Will Look Like in 2100, According to NASA's New Big Dataset 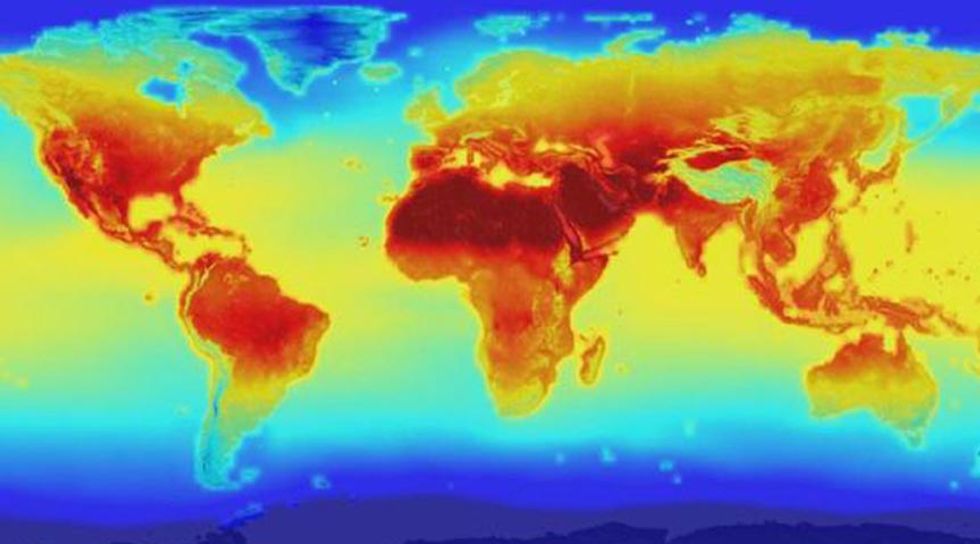 With all the talk of climate change, most people do not have a clear picture of what the earth might look like at the end of the century. But experts at NASA Earth Exchange (NEX) believe they do. Earlier this summer, they released a climate dataset, along with an disconcerting map showing some predicted temperatures. The visual result is perhaps the most alarming yet presented.

This shows predictions for Earth's daily maximum temperatures estimated for July 2099. As reported in Gizmodo, by that time, the Earth's CO2 concentrations will have topped 900 parts per million, comprising nearly 0.1 percent of our atmosphere. As a disquieting benchmark, in the early part of this year, we hit 400. The thermometer scale that accompanies the map shows just how much hotter we are talking.

The NASA climate projections offer a detailed view of future temperature and precipitation patterns around the world at a 15.5 mile (25 kilometer) resolution, covering the time period from 1950 to 2100. The 11-terabyte dataset provided daily records and estimates of maximum and minimum temperatures and precipitation over the entire globe. It integrates actual measurements from around the world with data from climate simulations created by the international Fifth Coupled Model Intercomparison Project, or CMIP, which is a standard experimental protocol for studying the output of coupled atmosphere-ocean general circulation models.

The data can be filtered to the level of individual cities and towns on a daily timescale. This can help developing nations predict and prepare for the local effects of changing patterns in weather, floods and droughts. On a global scale, it will help both scientists as well as the general population see that we are in for an extremely warm century ahead.

NASA intended the information not only to be a warning, but a tool.  “NASA is in the business of taking what we’ve learned about our planet from space and creating new products that help us all safeguard our future; with this new global dataset, people around the world have a valuable new tool to use in planning how to cope with a warming planet.”

The question for the rest of us, and for the generations ahead of us, remains whether we have the collective will to stop this map from happening.

If you're interested in how future events can affect the present, read Physicists Demonstrate How Time Can Seem To Run Backward, and the Future Can Affect the Past.