Physicists Demonstrate How Time Can Seem To Run Backward, and the Future Can Affect the Past 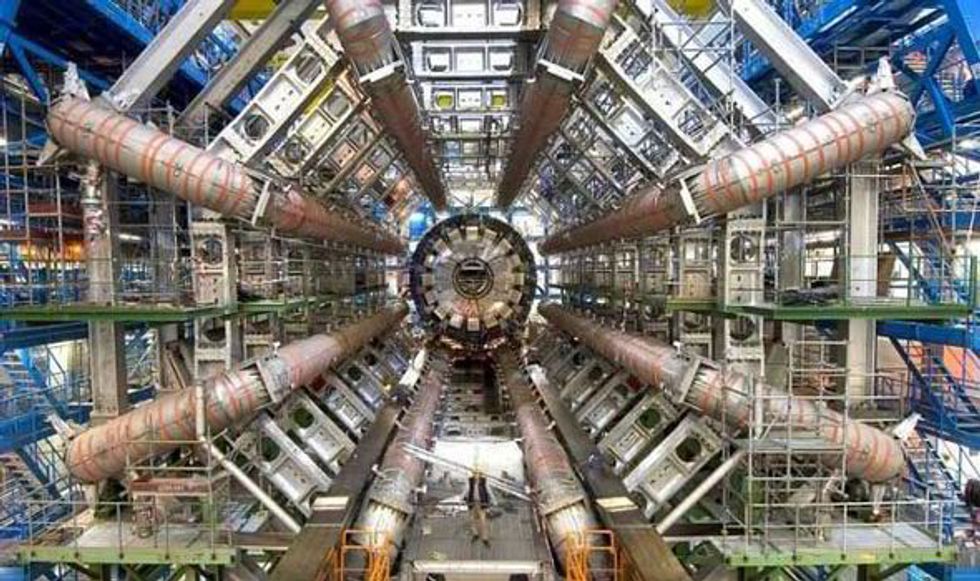 That might all change soon. Welcome to the world of quantum physics.

To the average person, the observable, classical world of Newtonian physics feels like common sense. Time moves forward; things exist in only one place at a time; if a tree falls in the woods but no one sees it, we assume it still fell. But a team of physicists at Australia National University are saying, "Not so fast." Enter quantum physics. And it's really weird.

A new study published in Nature Physics appears to show that time in fact may move backward, things may exist in multiple states, and whether a tree fell in the woods not only may depend on whether anyone ultimately saw it, but also on whether something somehow knew it would be seen. "It proves that measurement is everything. At the quantum level, reality does not exist if you are not looking at it," said Associate Professor Andrew Truscott from the ANU Research School of Physics and Engineering.

This absurd-sounding conclusion derives from two experiments, one of which has been around for some time, and one of which was just successfully performed only a few weeks ago.

First, the older experiment. Scientists have long observed the strange behavior of light particles, photons, in something called the Double Slit Experiment. Here's how that worked: When light was shone at a screen with two narrow slots in it, the photon particles acted rather schizophrenically. On the one hand, the photons acted like particles, casting a direct glow on the wall behind the slits. But they also acted like waves, generating an "interference pattern" like waves of water might, creating a mysterious second pattern beyond two simple strips of light.

This principle lies at the heart of quantum physics. A particle like a photon acts as if it has indefinite, suspended states. It lacks any physical properties, and is defined instead as a set of "probabilities" that it exists in any one particular state. (These "probabilities" aren't just some laboratory or academic theory. They underlie all of our

modern notion of chemistry, and they make microprocessors and nuclear reactions possible. Our modern world would not exist without these bizarre properties of particles.)

If you're lost, this video explains the Double Slit experiment and the probability wave in quantum mechanics:

But then there's the second weird thing. When scientists try to observe a photon in the experiment, the very act of watching it "collapses" into a definite state--either a particle or a wave. No matter what they do, whenever observers go to take a measurement, it is as if the photon "decides" what state it is in. The act of observation is said to pull that photon into a definite reality. (This is at the heart of the Schrödinger's Cat parable, where a hypothetical cat inside a box is neither alive nor dead until you open the box and look inside.)

This second weird notion--that observation defines reality--has been around a long time, along with an experiment famously proposed by John Wheeler back in 1978, and thought to be impossible to carry out. It was called the "delayed choice thought experiment." It was a "thought experiment" because it was presumed it could not actually be facilitated. That experiment sought to answer the question, "So precisely when does a photon choose to act like a particle or act like a wave? When it is first fired, before it goes through the slit, or perhaps even...after?"

As explained in Digital Journal, one of Wheeler's proposed thought experiments went something roughly like this: What if you could insert a second screen, but only after something has passed the first screen? The second screen, which would sometimes be inserted and sometimes not based on random chance, was designed to cause interference similar to the first. That way, in theory, you could observe the state of the photon when it passed through the first screen and see if it remained consistent going through the second.

The technical difficulty was that no one was able to insert that second screen in time,

that is, after the item had passed through the first but before it struck the back wall. That task seemed insurmountable. But now that experiment has been tried out, and the results are rather mind-boggling.

The team in Australia turned thought experiment into lab reality by using lasers. Their subject matter was not a photon but a helium atom which, though much more massive than a photon, would also theoretically act like a photon. That is, it would also exist in an indefinite state, then act either like a particle or like a wave, once observed. The lasers they used served as a pair of grates, one before the other, with the second grate randomly dropped in.

What they found is weirder than anything seen to date: Every time the two grates were in place, the helium atom passed through, on many paths in many forms, just like a wave. But whenever the second grate was not present, the atom invariably passed through the first grate like a particle. The fascinating part was, the second grate's very existence in the path was random. And what's more, it hadn't happened yet.

In other words, it was as if the helium particle "knew" whether there would be a second grate at the time it passed through the first. The possible future presence of that second grate appeared to be determining the past state of the atom as it passed through grate #1. Whether it continued as a particle or changed into a wave depended on something that might happen in the future.

“The atoms did not travel from A to B. It was only when they were measured at the end of the journey that their wavelike or particle-like behavior was brought into existence,” Truscott said. If we are to believe that the atom really did take a particular path or paths, then one has to accept that a future measurement is affecting the atom's past, he concluded.

The notion that the future is affecting the past has profound implications beyond the rarified world of quantum physics. It calls into question, for example, the very question of free will, or whether there are multiple worlds with multiple realities. These studies and findings will no doubt be challenged and presumably replicated, but one thing is clear: This new wrinkle adds more questions than answers.