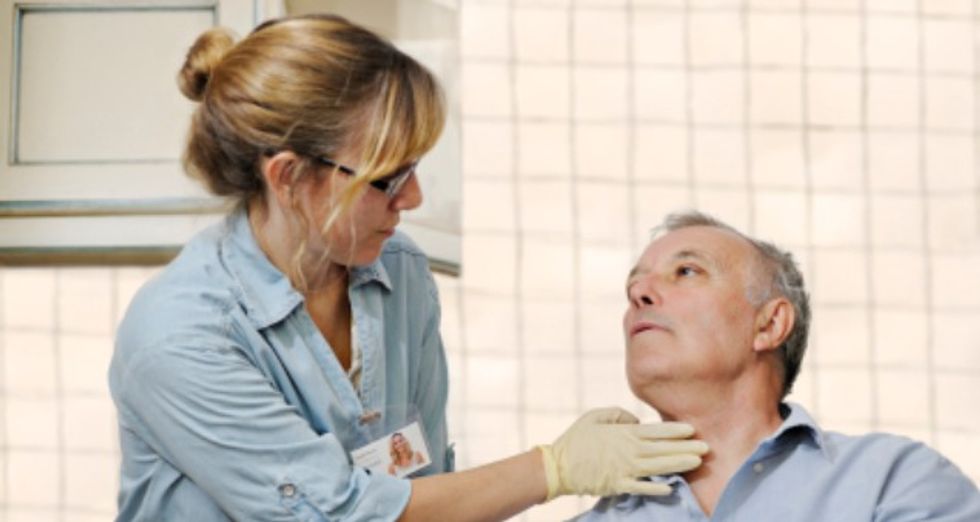 Parkinson’s, a progressive, incurable disease that attacks the brain and nervous system, may actually begin in the gut, say researchers from the California Institute of Technology. In a study published in the journal Cell, the researchers shared the results of experiments conducted on mice that suggest the origins of the disease may begin with bacteria in the gut.

The researchers studied a group of mice that were genetically bred to develop high levels of alpha-synuclein, a protein that is associated with damage to the brain in patients who have Parkinson’s disease. They found that only the mice that had bacteria in their stomachs actually developed the disease; the ones with sterile stomachs did not. In addition, the scientists transplanted bacteria from the guts of people with Parkinson’s into a group of mice, and found that they suffered more severe symptoms of the disease than a group of mice who received transplants from healthy people.

People living with Parkinson’s disease experience a range of symptoms surrounding their movements. The symptoms often begin with a faint tremor in the hand, and progress to include tremors in the jaw, face, legs and arms; stiffness in the limbs and trunk; slow body movement; and impaired balance and coordination. Early symptoms also include constipation and loss of smell, which further link the disease to activity within the gut. Nearly one million people in the U.S. currently have Parkinson’s, and 10 million people have been diagnosed worldwide. While symptoms can be managed through medication and therapy, there is no cure for the disease.

Immune cells in the brain may be activated by bacteria in the gut. (Credit: Source.)

Scientists hope that by understanding the role gut bacteria plays in the development of Parkinson’s, they may be able to combat the disease before it reaches the brain. “That would be game-changing,” said Dr. David Burn of the University of Newcastle. “There are lots of different mechanisms that could potentially stop the spread.”

One potential new treatment could come from the dogfish shark. A naturally occurring steroid called squalamine found in the shark could prevent the synuclein proteins from clumping together. By blocking this clumping process, damage to the nervous system could be prevented, or even reversed.

“In areas of the brain and the nervous system where the presence of aggregates impaired function but didn’t destroy those nerves, these functionalities could be restored with squalamine,” said Dr. Michael Zasloff, professor of surgery and pediatrics at Georgetown University School of Medicine and scientific director of the MedStar Georgetown Transplant Institute.

“There is a great deal of research right now in Parkinson’s that argues, and I am big believer in this, that the problem in Parkinson’s begins in the gut. The hypothesis on this is that aggregates form and synuclein is produced in great amounts in the nervous system of the gut. Once it’s made in the neurons of the gut, it travels up the nerves that connect the gut’s nervous system to the brain, and then finds its way into the brain stem and begins to travel throughout the brain. Our belief is that by preventing aggregation within the nervous system of the gut, we could ultimately impact on events that are taking place throughout the brain.”

In a University of Cambridge study published in the Proceedings of the National Academy of Sciences, Zasloff described promising results seen in experiments involving roundworms — an organism that shares 40 percent of its genes with humans, making them an ideal model for human disease studies. When the researchers orally administered squalamine to roundworms that were genetically modified to over-develop synuclein in their muscle cells, they found that the compound prevented the synuclein from clumping and causing problems.

Gut microbiota can have a significant effect on physical and mental well-being, which makes maintaining gut health important on numerous levels. Gut health can be disrupted by use of antibiotics, exposure to food pathogens and contagious diseases. Could protecting the gut also prevent the development of Parkinson’s? Scientists say gut symptoms, such as constipation, can appear in patients 10 years before the movement disorder is diagnosed, and squalamine could be used to treat that symptom, potentially heading off the progression of the disease.

“Parkinson's disease has many symptoms and we hope that either this compound, or a derivative of it with a similar mechanism of action, could alleviate at least some of them,” said Christopher Dobson, a co-author and professor of chemistry at the University of Cambridge. “We might be able to use it to make improvements to patients' lives, while also studying other compounds with the aim of developing a more powerful treatment in the future."