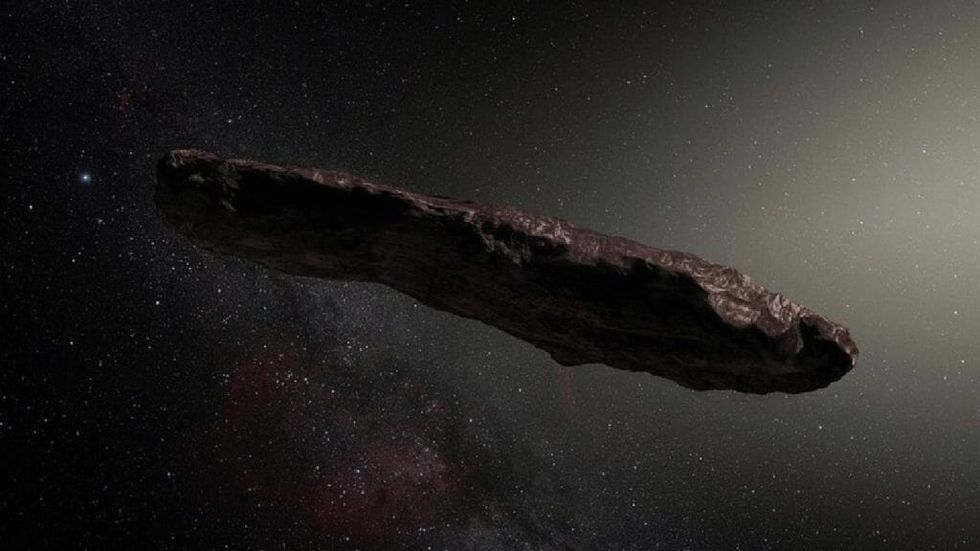 Our solar system teems with millions of asteroids and trillions of comets, left over from the formation of the Sun and planets 4.5 billion years ago. Earth is impacted by small space rocks every day; we see them as “shooting stars,” or meteors. In October 2017, astronomers spotted an unusual object passing through our planetary neighborhood. The object’s size, shape, composition and trajectory hold clues to its interstellar origin.

While it’s the first confirmed object from another solar system, astronomers believe that such objects pass by the Sun at least once per year. Their small size makes these interstellar vagabonds difficult to see.

In a report published in Nature, astronomers at the University of Hawaii’s Institute for Astronomy confirmed that our solar system has a visitor from another star system in our galaxy. Observations from the Pan-STARRS1 telescope reveal the object, classified as “A/2017 U1” and nicknamed “`Oumuamua,” is an asteroid unlike any other yet observed.

“What we found was a rapidly rotating object, at least the size of a football field, that changed in brightness quite dramatically,” team leader Karen Meech said in a statement. "This change in brightness hints that `Oumuamua could be more than 10 times longer than it is wide - something which has never been seen in our own Solar System."

Of the 750,000 or so known asteroids and comets in our solar system, most are round or oblong and range in size from boulders to small moons. Ceres, the largest object in our solar system’s asteroid belt, has a radius of 476 kilometers and makes up 25% of the entire asteroid belt between Mars and Jupiter. Ceres is one of the thousands of dwarf planets that are scattered throughout the outer solar system.

`Oumuamua, which in Hawaiian means ‘first to reach out,’ is roughly 400 meters long and 40 meters wide. Its reddish tint, according to astronomers, is due to lengthy exposure to cosmic rays as it traveled through interstellar space. “While study of `Oumuamua's colors shows that this body shares characteristics with both Kuiper Belt objects and organic-rich comets and trojan asteroids," said Meech, "its hyperbolic orbit says it comes from far beyond."

Similar coloring is common in objects in our outer solar system, but `Oumuamua’s “unusually large variation in brightness means that the object is highly elongated: about ten times as long as it is wide, with a complex, convoluted shape,” Meech explained.

`Oumuamua’s unusual shape and unique trajectory indicated that it originated around a star other than the Sun. “We also found that it has a dark red colour, similar to objects in the outer Solar System, and confirmed that it is completely inert, without the faintest hint of dust around it,” Meech added.

According to the report, `Oumuamua “is compositionally indistinguishable from similar objects in our own solar system despite its curious morphology,” due to its coloring, size, and density. Its trajectory and speed, however, indicate that A/2017 U1 came from outside our solar system.

Some theorized, and no doubt hoped, that the object was an alien ship of some sort, but upon closer observation by West Virginia’s Green Bank Observatory, no evidence that it’s anything but organic space debris was found. Researchers do, however, now believe it may be more of a comet disguised as an asteroid, even though its behavior originally led them to believe it was more likely the latter.

Where did `Oumuamua originate?

Although it is now heading back out of the solar system, `Oumuamua’s trajectory brought it within 0.25 Astronomical Units from the Sun, or about 25 million kilometers. One AU is the average distance between the Earth and Sun, which is approximately 100 million kilometers. Using the asteroid’s trajectory and velocity, about 95,000 kilometers per hour, astronomers attempted to discern `Oumuamua’s home star system. Their initial calculations show that `Oumuamua “had come from the approximate direction of the bright star Vega, in the northern constellation of Lyra,” according to a statement from the European Southern Observatory in Chile.

Vega is located 26 light years from our solar system. Because stars drift through space, Vega was in a different location than it was 300,000 years ago. Further calculations estimate the asteroid’s likely place of origin in the Carina or Columbia star systems, which are 163-277 light years away, though additional measurements are needed to definitively pinpoint its home. This means that `Oumuamua has likely been speeding through the Milky Way for upwards of 40 million years. The fact that `Oumuamua is an asteroid, rather than a comet, suggests that it formed close to its parent star, and was likely ejected by the gravity of a planet 20-30 times more massive than Earth.

Tracking asteroids and comets may save humanity from annihilation

Since the formation of our solar system 4.5 billion years ago, asteroids and comets have regularly impacted the Earth. An object the size of Manhattan slammed into what is now the Yucatan Peninsula 65 million years ago, triggering a mass extinction that ended the reign of the dinosaurs and wiped out 95 percent of all life on Earth. This event allowed small mammals to evolve into the species we see today, including humans. The mile-wide Meteor Crater in Arizona was formed from an impact 50,000 years ago by a space rock 50 feet across. Though they erode over time, impact scars can still be found all over our planet.

Objects that could potentially impact Earth are known as Near Earth Objects. NASA explains, “Near-Earth Objects (NEOs) are comets and asteroids that have been nudged by the gravitational attraction of nearby planets into orbits that allow them to enter the Earth’s neighborhood.” Astronomers have cataloged thousands of them. Some of them will strike Earth at some point in the future. The known NEOs, however, aren’t the concern, as we have some preparation time. Objects like `Oumuamua, and other yet undiscovered rogue bodies in our solar system, pose the greatest threat.

Earth will face major impacts in the future. By identifying and studying the paths of asteroids and comets, astronomers can make predictions about future impacts. Fortunately, given enough warning, humanity has the technology to deflect these threats. NASA’s Planetary Defense Coordination Office (PCDO) is responsible for “ensuring the early detection of potentially hazardous objects (PHOs) – asteroids and comets whose orbits are predicted to bring them within 0.05 Astronomical Units of Earth; and of a size large enough to reach Earth’s surface – that is, greater than approximately 30 to 50 meters; tracking and characterizing PHOs and issuing warnings about potential impacts; providing timely and accurate communications about PHOs; and leading the coordination of U.S. Government planning for response to an actual impact threat.”

Here’s how humanity can save itself from an asteroid impact.

Given enough notice, humanity has the technical capability to prevent a major impact. There are two main ways to deflect an incoming asteroid; blowing it up or deflecting it. Blowing up an asteroid would likely involve using nuclear weapons (which poses ethical and political questions).

In the movies Armageddon and Deep Impact, nuclear weapons are dropped into bored holes in an incoming asteroid and comet, respectively. This approach, while fun to imagine, comes with significant risks. The biggest risk involves potentially turning one asteroid into several smaller bodies, resulting in multiple impacts instead of just one. Firing missiles or using nuclear explosions to deflect an asteroid probably wouldn’t be all that effective either, as these objects are moving at tens of thousands of miles per hour. It’s about as effective as shooting a bb gun at a freight train. Nuclear weapons also have a much smaller blast radius in space, because there’s no air through which pressure waves can perpetuate.

The best case scenario of preventing an impending impact requires years of warning and a means of deflecting, rather than destroying, a massive space rock. Many methods of deflecting asteroids have been proposed, including planting solar sails on the surface, high powered lasers, and my personal favorite, gravitational tugging. Solar sails would use the solar wind like sails on a boat, gradually nudging the object off course. High powered lasers focused on a single point could heat the object to the point of fracture, as well as generate steam that could push an asteroid off its course.

A gravity tractor, however, is the simplest, cheapest, and least messy way of deflecting an incoming asteroid. A probe would be launched toward the asteroid, park itself at a specific distance, and gradually fire its thrusters. Even though the probe’s gravity is extremely small, it would be enough to gradually drag an asteroid or comet off its course enough to miss Earth, essentially functioning as a tractor beam. The entire process would probably take the better part of a decade, but slowly tugging an asteroid off course falls entirely within the bounds of current space technology. Worldwide cooperation and collaboration would be essential, and given today’s geopolitical climate, it may take an outside threat for humanity to stop squabbling over our petty differences.

The dinosaurs had no warning, so what’s our excuse?