Zombie Ants Are Now a Thing and We're Terrified 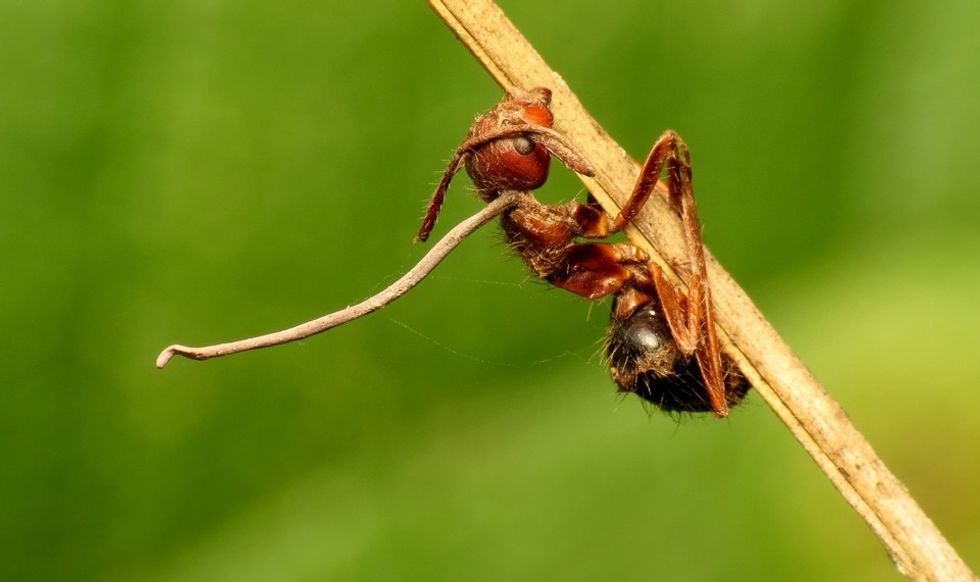 Deep in the forests of Brazil, a fungus known as Ophiocordyceps unilateralis is taking over the brains of carpenter ants and directing them to other parts of the forest that the fungus finds more hospitable.

"This so-called zombie or brain-manipulating fungus alters the behavior of the ant host, causing it to die in an exposed position, typically clinging onto and biting into the adaxial surface of shrub leaves," said the authors of a study published in the journal Plos ONE in 2011, which introduced the world to the concept of zombie ants.

In a 10-day process, the fungus takes over the ant’s body, directs its actions throughout the forest, and ultimately kills the creature. It then releases its spores from the dead ant’s head and neck, and those spores go on to turn another wave of ants into zombies.

New research reveals even more disturbing findings. It turns out the fungus invades the ant’s body, but it doesn’t even need the ant’s braaaiiiins.

Through electron microscopy and 3D reconstructions of the host and parasite tissues, an international team of entomologists, geneticists, computer scientists, and microbiologists learned that the fungus invades muscle fibers throughout the ant’s body but leaves the brain intact.

In other words, the ant is alive and conscious while the fungus controls its behavior. O. unilateralis is able to hijack the ant’s body and control it as a literal extension of its physical self.

The researchers used artificial intelligence to determine the extent to which the fungus infiltrated the ants. A machine-learning algorithm was created to differentiate between fungal and ant cells. This allowed the researchers to determine how much of the insect’s body was converted into fungus.

“We found that a high percentage of the cells in a host were fungal cells,” said researcher David Hughes from Penn State. “In essence, these manipulated animals were a fungus in ants’ clothing.”

“Normally in animals, behavior is controlled by the brain sending signals to the muscles, but our results suggest that the parasite is controlling host behavior peripherally,” explained Hughes. “Almost like a puppeteer pulls the strings to make a marionette move, the fungus controls the ant’s muscles to manipulate the host’s legs and mandibles.”

The fungus is likely secreting a hormone that enables it to control the ant’s behavior, says Charissa de Bekker, a professor at the University of Central Florida.

Could this fungus infect humans? Unlikely, although the research has yielded modeling techniques that could ultimately be used to track other organisms in the human body. It has captured our imaginations, however. The fungus is a model for the monsters in the video game The Last of Us and appears in the M.R. Carey book The Girl With All the Gifts. Our horror at the concept of zombies is equal to our fascination with them.