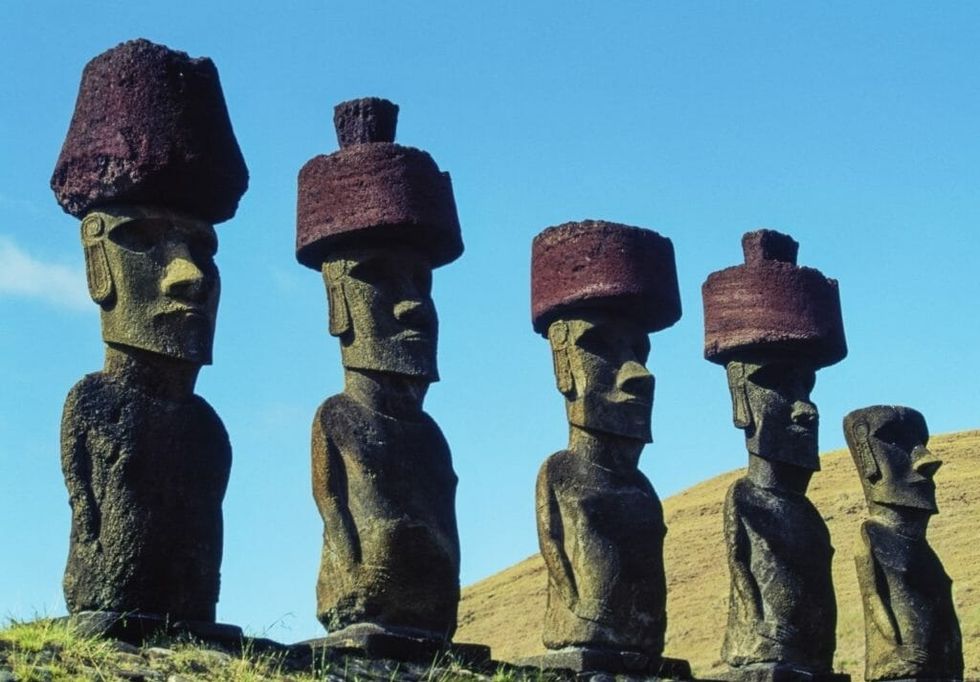 Easter Island is famous for its iconic stone heads. These statues, known as Moai, are a mystery of human ingenuity. Standing an average of 13 feet high and weighing 14 tons each, nearly 1,000 statues are positioned around the island, which is governed by Chile. Archeologists have long debated what the statues mean and how on earth a relatively small population could manage this engineering feat in the years following the arrival of the Polynesian people in 800 A.D.

"It is amazing that an island society made of 10 to 12 chiefdoms had sufficient unity and ability to communicate carving standards, organize carving methods and achieve political rights of way … to transport statues to every part of the island," said archaeologist Jo Anne Van Tilburg, founder of UCLA's Easter Island Statue Project.

In the 18th century, when Europeans first visited Easter Island, called Rapa Nui by its residents, they recorded a population of just 1,500 to 3,000 residents. Now, a detailed study of the island suggests that the population was actually much higher at one point.

“It appears the island could have supported 17,500 people at its peak, which represents the upper end of the range of previous estimates,” said Cedric Puleston, based at the department of anthropology at the University of California and lead author of a new study published in the journal Frontiers in Ecology and Evolution.

Scientists studied detailed maps, took soil samples, built weather stations, modeled population, and estimated sweet potato production based on conditions. Sweet potatoes are a key part of the island diet. Researchers estimate that about 19 percent of the island could have been cultivated for sweet potatoes, producing more food than previously thought — and more people to build the Moai.

"If we compare our agriculture estimates with other Polynesian Islands, a population of 17,500 people on this size of island is entirely reasonable," said Puleston.

Exactly what lead to the decimation of the Easter Island people remains a mystery. Some scientists believe that the population was decimated through an inter-island war. Others blame genocide by outsiders. In the 1800s, slave traders stopped at the island and kidnapped hundreds of residents to sell into slavery. This outside interaction also brought smallpox to the island, which further decimated the population.

“Despite its almost complete isolation, the inhabitants of Easter Island created a complicated social structure and these amazing works of art before a dramatic change occurred,” said Puleston.

The new study outlines the possibilities — and limits — of agriculture on the island. Easter Island is considered one of the most remote places on Earth. The island is just 14 miles long and 7 miles wide, and 2,300 miles — a five-hour flight — west of Chile, which annexed the island in 1888 to use as a sheep farm. The human population evolved in isolation for hundreds of years, and scientists believe that as the population expanded, it depleted its resources to the point of ecological collapse.

The island’s history can also be seen as an environmental cautionary tale. Easter Island was once covered in tropical rainforests, including large tree species like the huge palm tree, Paschalococos, and the toromiro tree. Humans use Both are now extinct. Some archaeologists theorize that huge tree trunks could have been used as rollers to transport the Moai to their positions around the island. By 1,400, the giant palms had been harvested to extinction.

The loss of the island’s native trees created a number of significant changes. The residents no longer had the trees to use as a source of cooking fuel and building materials for their homes and boats. Without boats, their diets became limited to birds, mollusks, and creatures that could be caught near to home. However, without the trees to provide food and habitat for birds, their populations also collapsed, and today only one of the original 22 species of sea birds still nests on the islands.

Without the stability of the giant tree’s root systems, Easter Island began to erode. Additionally, the loss of the huge palms changed the island’s climate. Without cooling shade, the temperature rose, making the island hotter and drier. Streams and drinking water supplies dried up. Exposed to constant sun and wind, the island lost significant amounts of the rich topsoil needed to support new tree growth as well as agriculture. Today, efforts are in progress to reforest the island with new types of trees, but the nutrient-rich bed of topsoil needed to support a rainforest is long gone.

The lessons of Easter Island are not entirely lost. In September, one of the world’s largest marine protection areas was created off the coast of Easter Island. The 740,000 square mile Rapa Nui marine park is roughly the size of the Chilean mainland and will protect at least 142 endemic marine species, including 27 threatened with extinction.

“This marine reserve will have a huge global significance for the conservation of oceans and of indigenous people’s ways of life,” said Matt Rand, the director of the Pew Bertarelli ocean legacy project. “The Rapa Nui have long suffered from the loss of timber, declining ecosystems and declining populations. Now they are experiencing a resurgence based on ensuring the health of the oceans.