New fathers experience hormonal fluctuations that could lead to PPD. 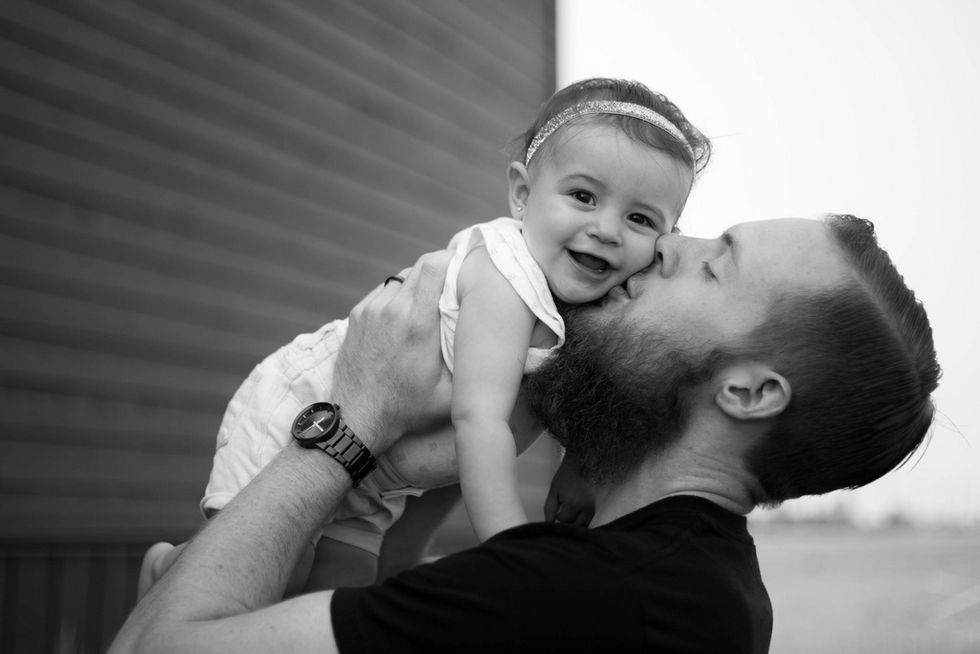 Oh, baby! The arrival of a newborn has a dramatic impact on the mother’s hormones—no surprise—as a rush of biochemical reactions occurs to improve attachment and attentiveness. Oxytocin, a hormone that increases the amount of love and protectiveness new mothers feel towards their offspring, has been called the “love drug” because it helps new mothers bond with their babies.

"Maternal oxytocin levels—the system responsible for maternal-infant bonding across all mammalian species—dramatically increase during pregnancy and the postpartum [period] and the more mother is involved in childcare, the greater the increase in oxytocin," said brain researcher Ruth Feldman.

OK, that all makes sense. But what happens when the father is involved in childcare? Studies have found that men also experience an increase in oxytocin levels. While oxytocin release is triggered by childbirth and lactation in mothers, fathers need to only interact with their babies to get the same hormonal rush. And that’s not the only hormonal shift that impacts fathers.

Studies have shown that men’s testosterone levels fluctuate along with their parenting activities. The amount of the hormone present in the blood of new fathers drops by as much as 34 percent—with each child—and may never bounce back to pre-baby levels. (The same phenomenon has been measured in other mammals that share parenting duties, including Mongolian gerbils, Djungarian hamsters, California mice, and cotton-top tamarins.) Men with pregnant partners experienced declining levels of testosterone as the pregnancy progressed. Fathers who spent more time with their children experienced greater drops in testosterone than those who were less involved.

In addition to parenting duties, sleep deprivation, lack of exercise, stress and baby nurturing activities are also thought to be contributing factors. However, these hormonal swings can have a positive impact on family dynamics. A study published in the journal Hormones and Behavior found that women with partners whose testosterone levels dropped experience lower levels of postpartum depression. These women reported greater satisfaction with their relationship, which reduced their depressive symptoms.Meanwhile, men whose testosterone levels increased, or were high in general, experienced more parenting stress and had a greater likelihood of acting hostile towards their partner and offspring.

"We often think of motherhood as biologically driven because many mothers have biological connections to their babies through breastfeeding and pregnancy," said Darby Saxbe, the study's lead author and an assistant professor of psychology at USC Dornsife College. "We don't usually think of fatherhood in the same biological terms. We are still figuring out the biology of what makes dads tick.”

“It can actually look like irritability and anger, working constantly, drinking or gambling too much, or other impulsive behavior,” says Dr. Will Courtenay, coordinator with Postpartum Support International. “These are some of the ways men experience and cope with depression differently than women.”

Depression has been linked to low testosterone levels. This creates a complex picture of men’s hormonal states. Fathers with lower levels of testosterone experience higher levels of family well-being. They demonstrate superior parenting skills and greater support to partners, which creates overall well-being of the family. But when testosterone levels fall too much, men are at greater risk of depression. What’s a guy to do?

DIY solutions may begin with exercise, which can increase testosterone levels as well as alleviate symptoms of depression. Men should seek medical advice to evaluate their situation. If the testosterone deficiency is significant, some doctors recommend supplementing with hormone therapy. The American Urological Association is now offering formal guidance on diagnosing, treating and monitoring men with testosterone deficiency.

Greater solutions may involve combating the external factors that contribute to depression in fathers, including work stress, financial worries and lack of support for families. Larger societal changes could help, such as expanding paternity leave policies to help men adjust to life changes and the accompanying hormonal shifts. As men become more involved in family life and women shoulder more economic responsibilities, some societies are weighing the value of family leave for both parents. In Sweden, so-called “latte dads” (and moms) who are encouraged to take their offspring to coffee shops instead of logging hours at the office are entitled to take a paid leave of 16 weeks sometime between the arrival of a new baby and that child’s eighth birthday.

"We are in firm belief that children have the right to spend time with both their parents, and we have to ensure that the system also covers that and pushes society toward that direction," said Victor Harju, a spokesman for Sweden's Ministry for Social Affairs and Health. The policy benefits children as well as their fathers, and contributes to an overall high quality of life for people in the country.

"Here, it's not about work," says Swedish father Tyler Reid. "It's about enjoying life."