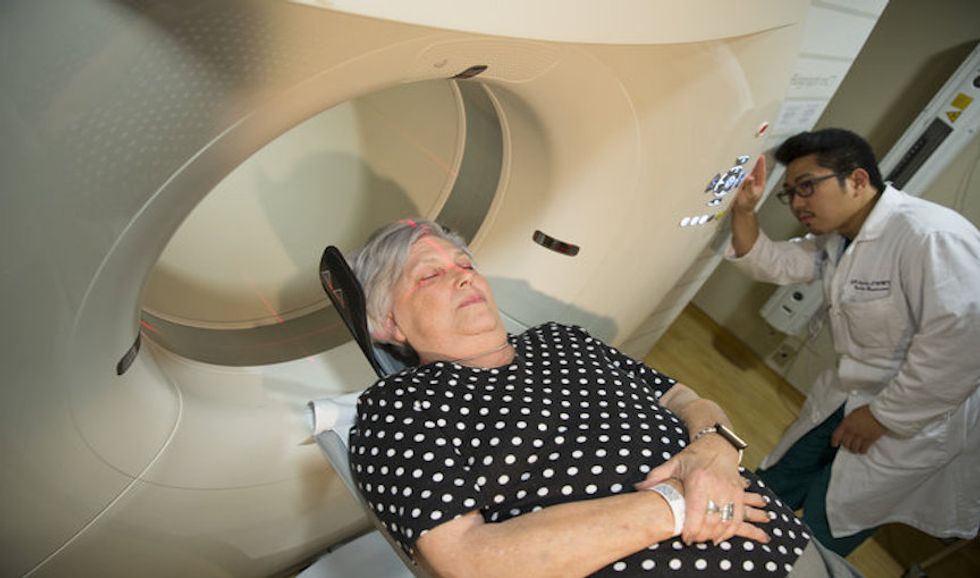 By the time patients are diagnosed with Alzheimer's, most will already have experienced memory loss and motor-skill decline. But now, researchers at University College London (UCL) have perfected a cutting-edge form of PET (positron emission tomography) scanning, called amyloid PET, that allows them to use radioactive tracers in the brain to spot thetelltale proteins that build up in neurodegenerative diseases like Alzheimer’s and other dementias, as much as 15 years before any symptoms.

The researchers used amyloid PET scanning, The Express reports, to find and measure the amyloid protein plaques and assess their size, thus charting the stages of the disease. Amyloid PET is different from traditional PET scans in that it uses a different imaging agent that binds to deposits of naturally occurring beta-amyloid proteins in the brain, making them easier to see.

“By acquiring an amyloid imaging scan within a month of the indeterminate FDG-PET, managing physicians can treat patients with an Alzheimer's-like pattern of reduced brain metabolism with a better chance of preserving cognitive function,” Erica Parker, lead author of the study and a research coordinator at the University of California, Los Angeles, told Science Daily.

Earlier detection, of course, allows a patient to take further preventive lifestyle actions. Furthermore, those with earlier detection can benefit from other therapies or medications, as they are developed.

Given the more than 44.3 million people worldwide with Alzheimer's disease (with an expected increase to more than 135 million by 2050, according to 2013 data from Alzheimer's Disease International (ADI), early detection may be key to an eventual cure.

Professor Nick Fox, of UCL's Dementia Research Centre calls this an exciting time. He told The Express, “There is a new window of opportunity. New technology allows us to see the first signs of Alzheimer’s Disease, earlier than we ever could before.”

This new imaging technique gives him confidence that they will find a therapy in the next 15 years for those whose signs of Alzheimer’s are caught early enough.

“We think amyloid and tau build up for 10-15 years before we see the first signs of forgetfulness,” he said. “These things are gradually accumulating under the surface. To all intents and purposes we are fine,” he says. Yet the brain may already be suffering decline.

Many research teams have been studying amyloid and tau proteins. Researchers from Berkeley University found people with higher levels of tau had worse memories. But having high levels of tau protein alone was not linked to the severe dementia seen in Alzheimer's. At the same time, higher levels of amyloid alone did not lead to Alzheimer's. But when tau and amyloid were found together, they appeared to trigger dramatic declines in brain function, which is characteristic of Alzheimer's, the researchers said. It is not yet known which comes first: tau or amyloid, but this new cutting-edge PET scan may eventually answer that question.

This, coupled with a new drug, Aducanumab, which has been shown to significantly reduce amyloid plaques, has researchers incredibly optimistic. Al Sandrock, Chief Medical Officer of Biogen, which manufactures the drug, told Huffington Post UK, “If we treat early enough, we may stave off Alzheimer’s disease completely and we may never have to worry about it again.”