For a Short While There, California Electricity Prices Went Negative

California is producing so much solar energy that the prices dropped into negative territory this Spring. That means the energy producers actually had to pay utilities to take the energy they produced. 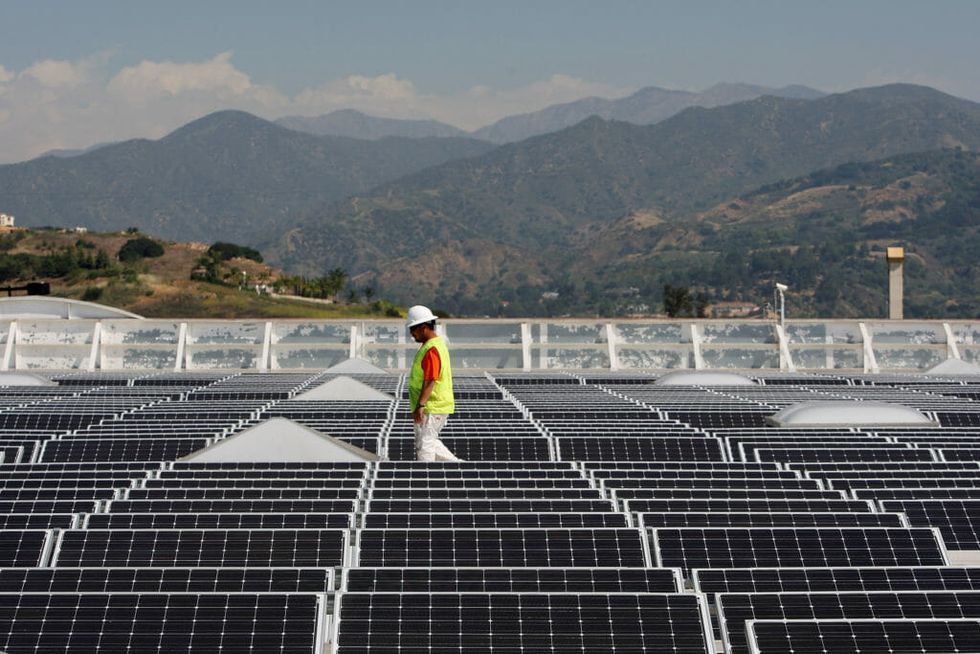 GLENDORA, CA - APRIL 22: Solar panels cover the roof of a Sam's Club store that was toured by California Gov. Arnold Schwarzenegger and Wal-Mart officials before their press conference on Earth Day, April 22, 2009 in Glendora, California. Following the tour, the governor and Wal-Mart officials announced that Wal-Mart will expand its solar power programs by adding solar panels on 10 to 20 additional Wal-Mart facilities to generate up to 32 million kilowatt hours of renewable energy every year, the equivalent of powering more than 2,600 homes. (Photo by David McNew/Getty Images)

According to the U.S. Energy Information Administration, total solar production in California grew from less than 1 gigawatt in 2007 to nearly 14 gigawatts by the end of 2016. By the end of 2015, the EIA found that California’s utility-scale solar energy production accounted for 52% of the entire nation’s production. That’s no doubt even higher today.

This growth is due in part to the rising number of utility-scale solar power generators that are being installed in California. 2016 alone saw an increase of almost 50% over the previous year.As a result, in early March of this year, for the first time ever, solar energy was supplying as much as 40-50% of all California’s power needs.

In fact, California's solar energy producers are producing so much energy from the sun that the wholesale energy prices utilities pay for that energy actually turned negative for a few hours in mid-March. That contrasts with the same period between 2013-15, when wholesale prices ranged from $14-45 MWh.

That's good news for California energy consumers, who currently pay among the highest energy prices in the country. But it's less great for the solar energy producers themselves; negative prices mean they have to pay utilities to take their energy.

Assuming growth continues at this pace, solar energy producers may have to rethink the energy process from renewable sources. Right now, it's less expensive for them to pay

utilities to take the energy when prices dip negative than it is to shut down and restart production later. But that calculus is likely to change.

As Chris Namovicz, senior renewable energy analyst for EIA, put it, “I think it’s certainly giving system operators pause to reassess how their operations work. Things are changing, and they might not be able to work the way they have in the past.”

Such are the growing pains of transitioning to more renewable energy sources, but other countries that lead the world in renewables have adapted to this new reality. At one point in May of last year, for example, Germany was producing so much energy from renewable sources that they had to pay customers to consume it.

Christoph Podewils of Agora Energieweinde, a German clean energy think tank, was optimistic. “We have a greater share of renewable energy every year. The power system adapted to this quite nicely. This day shows again that a system with large amounts of renewable energy works fine.”

By contrast, California hopes to produce 50% of its energy from renewable sources by 2030. Nationwide, President Obama had announced a goal of getting to 20% renewable energy by 2030, although President Trump’s provencontempt for environmental protection has likely lengthened the timetable for achieving that goal.