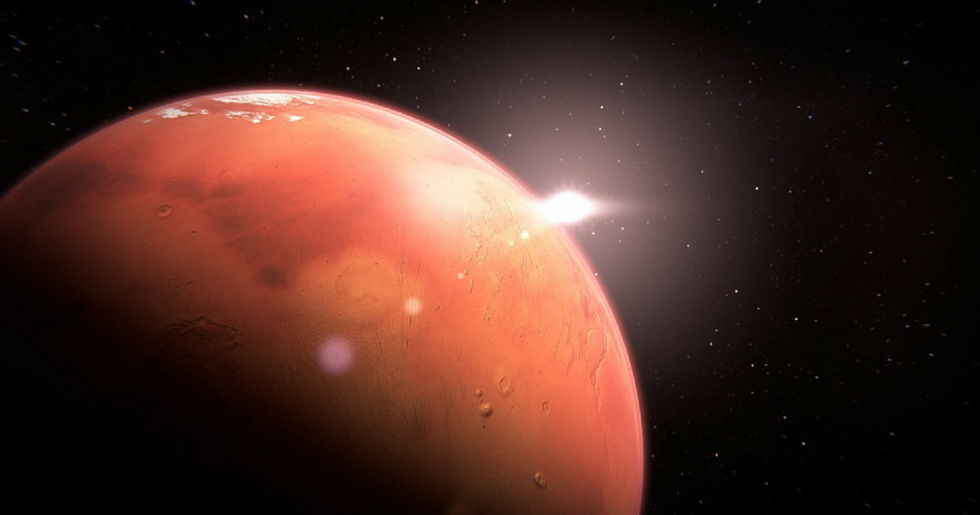 Humans really, really want to colonize Mars. Water, of course, is essential, and recent findings by researchers at Arizona State University have confirmed that Mars still has large amounts of water ice that future human settlers will be able to access with relative ease. The presence of subsurface water ice could also render the possibility of microbial life on Mars a bit more realistic. Perhaps most promisingly, the water ice is relatively clean.

"Water is a crucial resource for astronauts, because it could be combined with carbon dioxide, the main ingredient in Mars's atmosphere, to create oxygen to breathe and methane, a rocket propellant.” - Science Magazine

What did NASA find?

Scientists have discovered vast deposits of clean water ice just below the surface of Mars, according to a January study published in Science. Led by United States Geological Survey planetary geologist Colin Dundas, a team of researchers discovered eight regions of the Martian surface that are eroded away, enough so that stores of water ice were directly observable. As a general rule, bright patches of the Martian surface are presumed to be ice (Mars also has deposits of carbon dioxide ice at its poles).

“It’s long been hypothesized that this mantle was a mix of ice and dust based on things like its limited latitudinal extent and how it becomes increasingly eroded as you move from the poles toward the equator,” Tanya N. Harrison, a director of research at Arizona State University’s NewSpace Initiative, told Gizmodo. “But now thanks to CRISM spectral data and colour data from the HiRISE camera, we can actually see the signature of the water ice.”

Sifting through images provided by the Arizona State University-operated HiRISE camera, which takes detailed pictures of Mars based on data from NASA’s Mars Reconnaissance Orbiter and Mars Odyssey, Dundas and his colleagues examined areas of the Martian surface where surface rock has eroded away. Beneath the sterilized Martian regolith, Dundas’s team noticed 100-meter deep ice sheets, similar to those found in the polar regions on Earth. On Earth, ice cores are used to examine climatic conditions in Earth’s past, by measuring levels of various atmospheric gases trapped inside the ancient ice.

“This revealed cliffs composed mostly of water ice, which is slowly sublimating as it is exposed to the atmosphere. The ice sheets extend from just below the surface to a depth of 100 meters or more and appear to contain distinct layers, which could preserve a record of Mars' past climate. They might even be a useful source of water for future human exploration of the red planet.”

Dundas thinks that this same method could be implemented on Mars. The ancient Martian climate is still a mystery, namely, because Mars is believed to have been wet in the distant past. Scrutinizing changes in the Martian atmosphere, which took place over large swaths of time, will help answer the question of how Mars lost its liquid surface water and magnetic field. He also explained that finding large ice sheets is a huge boon to future human exploration of our planetary cousin.

"If you had a mission at one of these sites, sampling the layers going down the scarp, you could get a detailed climate history of Mars," suggested MRO Deputy Project Scientist Leslie Tamppari of NASA's Jet Propulsion Laboratory, Pasadena, California. "It's part of the whole story of what happens to water on Mars over time: Where does it go? When does ice accumulate? When does it recede?"

Based on the eight water ice scarps observed by HiRISE, which often slope as much as 55 degrees, they are estimated to cover a full third of the Martian surface beneath the dark, dusty regolith.

“There is shallow ground ice under roughly a third of the Martian surface, which records the recent history of Mars,” noted Dundas. "What we’ve seen here are cross-sections through the ice that give us a 3-D view with more detail than ever before.”

Amazingly, these ice deposits are only four to six meters beneath the surface of the red planet, which means they should be easily accessible to rovers, like NASA’s Mars 2020 mission which will generate oxygen on Mars by splitting water molecules it finds on the surface (the first step in terraforming Mars), and human settlers who need it to survive.

"On Mars, when you see something bright, it usually means ice,” said Richard Zurek, chief scientist for the Mars Program Office at NASA's Jet Propulsion Laboratory. Typical Martian surface rock and dust don’t reflect much light, "but the albedo readings on these exposed sections show that this is very bright stuff," Zurek says. "And the spectrometer readings support that this is water ice and not ice-cemented soil, which would be much harder to convert into water as a resource."

Dundas also explains in his study that the ice likely formed from seasonal snowfall over millions of years, which occurs when ice sublimates (changes from solid to gas) when it comes in contact with the Martian atmosphere. Speaking of the atmosphere on Mars, it’s less than 1% the mass of Earth’s and is nearly 96% carbon dioxide.

“We investigated eight of these locations and found that they expose deposits of water ice that can be >100 meters thick, extending downward from depths as shallow as 1 to 2 meters below the surface. The scarps are actively retreating because of sublimation of the exposed water ice. The ice deposits likely originated as snowfall during Mars’ high-obliquity periods and have now compacted into massive, fractured, and layered ice. We expect the vertical structure of Martian ice-rich deposits to preserve a record of ice deposition and past climate,” the study said.

What makes this ice so special?

The presence of easily-accessible water ice on Mars is good news for future space missions from Mars to Earth, and from Mars into the dark, far-flung reaches of the solar system. Water can be converted into liquid hydrogen and oxygen, and then used as rocket fuel. Mars’s relatively small mass, compared to the Earth, means it has less gravity; less surface gravity requires less fuel for spacecraft to make it into space.

The location of the Martian water ice may present challenges for eventual robotic rovers and settlers. Located at 55-58 degrees north and south of the Martian equator, the water ice lies close to the polar regions, which experience extremely cold temperatures. These latitudes also receive far less sunlight than latitudes closer to the equator.

Future human settlements are generally expected to be limited to being located no more than 30 degrees north or south of the equator, due to the more temperate climate. This is comparable to the climate in Scotland, located at 56 degrees north, to the southern tip of South Africa, at 30 degrees south latitude. Because Mars is much smaller than Earth and nearly twice as far away from the Sun, the climatic difference at different latitudes are immense.

"If you wanna stay warm, it's better to be in Hawaii than Alaska,” Zurek commented. "So that's something you'll want to follow up on and investigate before you put your base down."

A warmer climate, however, is theorized to drive ice deposits deeper underground, making them much more difficult to access. "I'm sure we haven't found all of the exposures at this point," Dundas said. It’s reasonable to infer that further exploration will reveal more subsurface water ice. It’s also realistic to predict that eventual settlers will possess, or at the very least have the capability of assembling, robotic rovers and sample collectors that they could deploy to mitigate the danger the northern Martian latitudes pose to humans.

Irrespective of the location, the water ice found by Dundas and his fellow scientists has an additional property that makes it appealing for future missions. It contains relatively few contaminants, such as heavy sediments, rocks, and dust. The relatively low amount of embedded rocky material in the water ice would enable easier and faster mining operations.