Scientists Are Tweeting the One Thing They Wish We Knew, And We're Floored 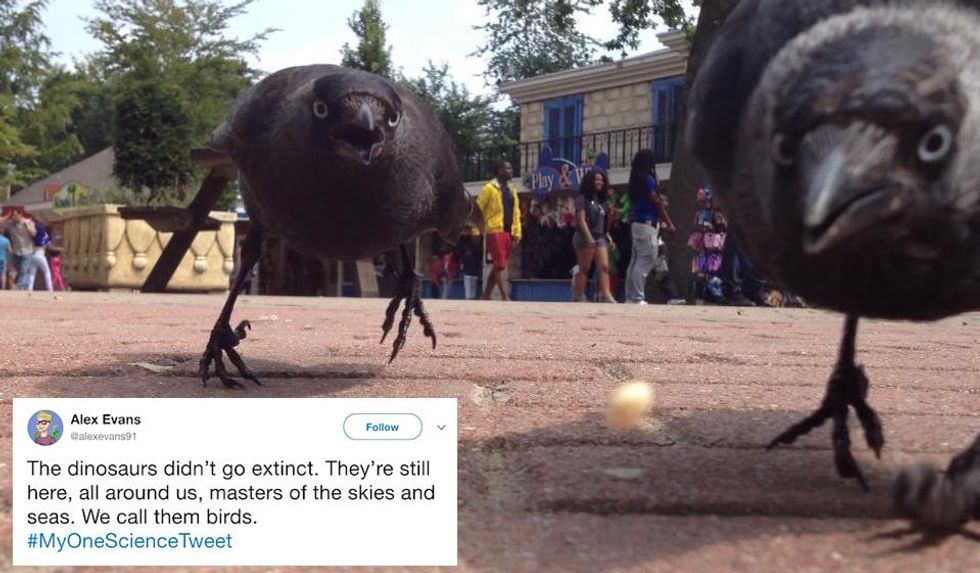 If you had to narrow down everything you know on a subject you’re passionate about and could only tell people one thing about it, what would you say?

That's what one person challenged the internet, specifically scientists, to do on October 27.

It all started with this tweet from Dalton Ludwick, a PhD candidate in entomology:

A lot of scientists leapt at the chance to tell the world what they think is most interesting or important about their work. Some shared the humor in their chosen field.

Vaccines do not cause autism, SIDS, autoimmune disorders, diabetes, or cancer. They cause adults. #MyOneScienceTweet https://t.co/YI0ajF0PRD
— Doc Bastard (@Doc Bastard) 1509641574.0

@EntoLudwick Animals talk to each other all the time, and talk about loads of different stuff. We aren't that speci… https://t.co/KRm8lAH3uf
— Arik Kershenbaum (@Arik Kershenbaum) 1509581632.0

Space is big So telescopes need to be big Making big telescopes is hard Should get some nice pictures though… https://t.co/DLsHZR6LG6
— David Gozzard (@David Gozzard) 1509323126.0

The responses provide insight into what scientists think the world should know.

Some used the hashtag to discuss important issues of the day.

Some vented about public misconceptions or addressed misinformation.

How do we know global warming is caused by us? - basic physics - climate changes in the past - fingerprints - modeling #MyOneScienceTweet
— Bart Verheggen (@Bart Verheggen) 1509726609.0

Statistics never add information; they only summarize it. It’s still up to you, the practitioner, to judge what the… https://t.co/iXV5ypPVLE
— Happy Cat on Pause (@Happy Cat on Pause) 1509124078.0

Biodiversity conservation is not only about saving species from extinction but it is also about human well-being an… https://t.co/hfPcryOeda
— Jean Paul Metzger (@Jean Paul Metzger) 1510174507.0

Climate change is not a foreign/future/non-human problem. It is happening, right now, all around us, and we need to act #MyOneScienceTweet
— Adam Rosenblatt (@Adam Rosenblatt) 1509511243.0

Some shared their message using emojis instead of words.

The results present an opportunity to find out some fun facts you might not otherwise know.

People who love science get to enjoy a slice of social media.

And maybe these Tweets will create some new science fans.

Raspberry seeds, the ones that get caught in your teeth, can survive in forest soils over 300 years until the next… https://t.co/TEzOoytvNM
— tgrignon (@tgrignon) 1510600080.0

And one scientist shared this wish for the future of science: