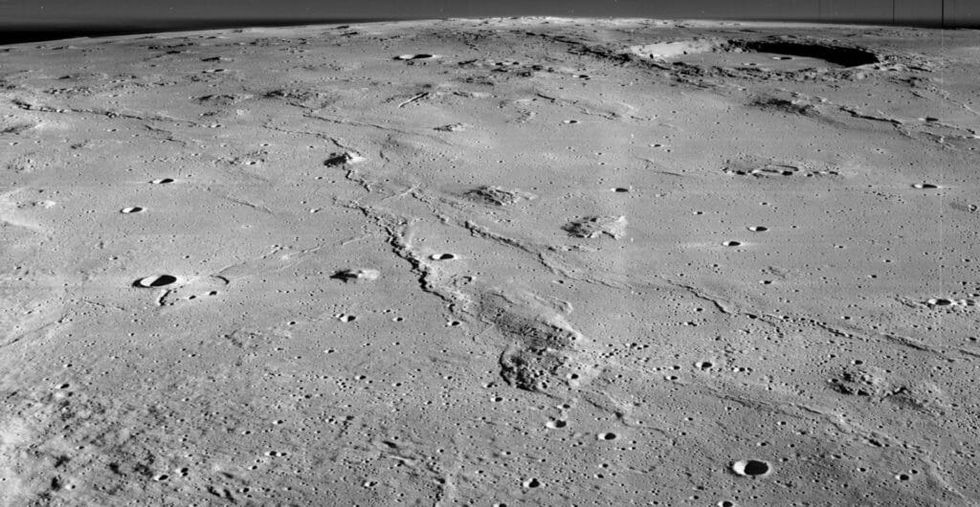 The United States and Russia are teaming up to construct the Deep Space Gateway, which is a stepping stone to establishing a human colony on the Moon; Apollo 17 in 1972 sent the last people to the Moon. Establishing a settlement on the lunar surface is a vastly more complicated task than a three-day stay in a lander. The Moon lacks both an atmosphere and a magnetic field, and its surface is completely exposed to high energy cosmic rays, radiation from the Sun, and the vacuum of space. Its surface temperatures are extreme, swinging between minus 100 at night and 173 degrees Celsius during the day, and a day on the Moon lasts 28 Earth days.

Humans cannot survive on the Moon without some serious protection—if we are to return and establish permanent residence up there, we need a safe place to stay.

Where Could Humans Build A Lunar Colony? Perhaps Underground In Lava Tubes

In October 2017, the Japanese Space Agency, JAXA, announced their discovery of a 50-kilometer-wide underground lava tube on the Moon. JAXA fired radar into a “skylight” on the Moon’s surface, using The Lunar Radar Sounder onboard Japan’s SELENE/Kaguya orbiter. JAXA astronomers determined that the skylight and other large, non-craterous holes on the lunar surface were entrances to large underground chambers. Further analysis by NASA’s Lunar Reconnaissance Orbiter confirmed that the bottoms of the holes extended in multiple directions, leading the teams to infer the presence of vast lava tubes. Additional evidence supporting the presence of lava tubes includes variations in the Moon’s gravitational field, as hollow space contains less mass.

The Marius Hills lava tube likely formed when the Moon was geologically active billions of years ago and could fit several Philadelphia-sized cities. Stable intact lava tubes, like the one JAXA found on the Moon’s Marius Hills, may be the best places to keep astronauts safe during future lunar missions. The subsurface chambers offer protection from the hazards of space, such as solar radiation and meteors. Unlike on the surface, temperatures inside the underground chambers would be stable.

The Giant Impact Theory, which is the accepted explanation of how the Moon formed, states that Luna formed after a Mars-sized object slammed into the still-molten Earth about 4.5 billion years ago. Because its chemistry is similar to Earth’s, building underground could ease access to mineable materials on the Moon. Water, for example, is abundant in moon rocks and exists in craters and rubble below the surface. Besides being essential for life, water can be split into hydrogen and oxygen, which could be used as rocket fuel.

Mining the Moon for materials that can be used in building spacecraft and construction of facilities would make space travel cheaper, too. The Moon also has ten times the amount of titanium ore than Earth, as well as significant amounts of oxygen, silicon, and iron. Rocks buried inside lava tubes have not been exposed to space-related weathering or impacts, meaning they contain gases and compounds that have remained untouched from the formation of the solar system.

By studying rocks from the very beginning of our solar system, scientists could learn more about the origin of our planet and the life on it (and perhaps elsewhere). The Moon would also make an ideal observatory. No atmosphere means no visual interference, and there’s enough gravity that ground-based telescopes could be easily erected. Taking advantage of necessary resources on the Moon will make venturing further into the solar system, and beyond, much easier.

The Moon Is Humanity’s Launchpad To Go Deeper Into Space

If humanity can get its act together and invest in a permanent presence on our life-giving satellite (we wouldn’t be here without the Moon), then the final frontier becomes far more accessible. And our chances of long-term survival greatly improve.

The Moon provides a unique starting point for the continuation of space exploration. The Moon’s gravity is only 1/6th that of the Earth, due to being much smaller. This means that spacecraft constructed on the Moon, using resources mined there, would need far less fuel to reach and travel through space. Most of the fuel carried by rockets from Earth is consumed merely leaving Earth’s gravity. This is also why sending people and equipment into space is so expensive. Getting to space costs up to tens of thousands of dollars per pound.

The first step to Moon colonization is the Deep Space Gateway, which will consist of a lunar-orbit space station, as well as reusable rockets, like SpaceX’s BFR (Big F***ing Rocket). In addition to aiding Earth-to-Moon travel, the BFR is also slated to send humans to Mars by 2022. Reusable rockets will dramatically reduce the costs of space travel, and improve the experience of being trapped in a tin can flying through the vacuum of space. For reference, the crew spaces in the Apollo missions were no larger than a couple of phone booths, and those journeys lasted more than a week.

In addition to improving the logistics of space travel, a Moon base would grant opportunities to study how humans could survive extended periods in space. Besides cost, the single biggest challenge of space travel is ensuring that explorers or tourists don’t lose their minds living with relatively few people, for long spans of time, in enclosed environments, completely removed from Earth. Sure, there may be some forms of recreation (a Holodeck would be nice), and the Moon is close enough for fast communication with Earth (it’s only one light second away, after all). But the food will probably leave something to be desired, and not being able to smell anything but the “spent gunpowder” aroma of Moondust in that pressurized environment might not seem appealing to most people.

There are ethical questions that arise, too: do Earth-based laws apply, or should space have its own set of rules? Should nations be able to “claim” regions of space or the objects floating in it? Should weapons or military presence be allowed in space? Should colonies self-govern? Should sex between astronauts be permitted? What should be done if someone commits a crime, or becomes a threat to the mission? What if someone just simply wants to come home?

Additionally, living in low gravity has adverse effects on human physiology. Bone loss, muscle atrophy and immune system malfunction, specifically, are the greatest dangers. Cosmic rays and solar radiation can irreparably alter DNA. Getting sick or injured are the biggest risks, and therefore require incredibly well-thought-out contingencies. Even the most physically and mentally fit individuals would find overcoming these parameters a daunting task. It won’t take long until growing food on the Moon becomes a reality, though, and many may feel these risks are worth it for the chance to see the Earth from afar and bounce around in low gravity.

The sobering truth, however, is that humanity must expand beyond the confines of Earth if it is to survive. The Sun will swallow the Earth in a couple billion years. But our end will likely come sooner, whether from the destruction of Earth’s biosphere, or war, famine, disease, or external threats like asteroids. If technology and innovation are used intelligently, each of these scenarios can be prevented. It’s time to return to the Moon and leap beyond it before it’s too late.