MIT was just one participant in an international competition in which teams submit proposals for Martian colonies. 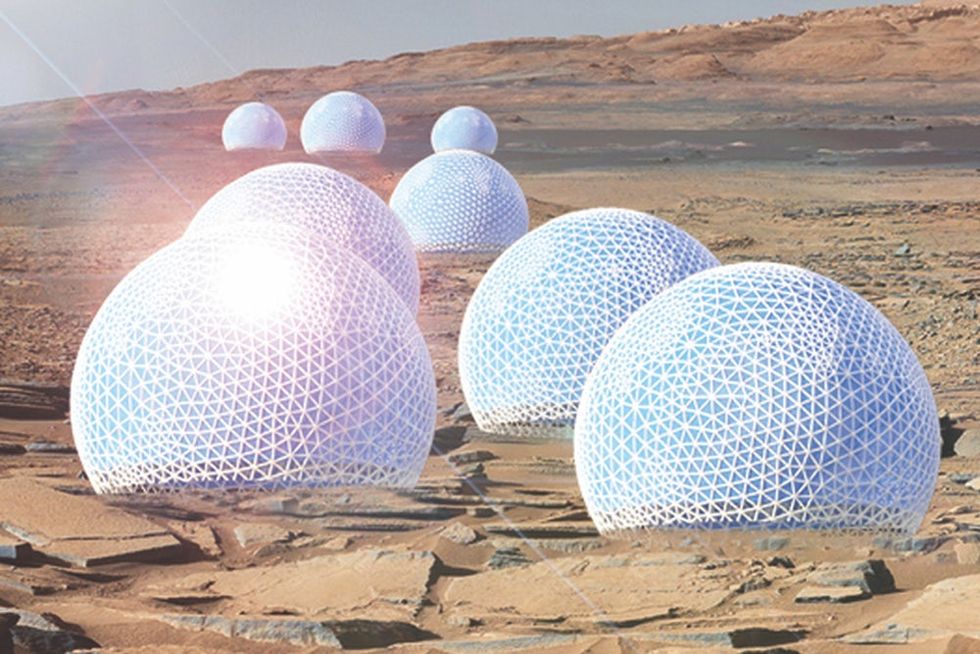 There’s been serious talk of late about sending people to Mars, the goal of which is to establish a permanent colony on the Red Planet, perhaps within the next decade. Assuming astronauts can survive the six-month-long journey in one piece, human life in the lethal Martian environment presents its own challenges. Sustainable habitation requires shelter, water, food and recreation, none of which exist on Mars in any usable form (there is water on Mars, but a lot of work is required to access it). Martian settlers will need to grow their own crops, generate their own air, purify their own water and find ways to have fun, all without any physical assistance from mission control.

Fortunately, there are some brilliant minds working to figure all this out, and very brave individuals living in Earth-based habitats that mimic what life would be like in a first-generation Martian colony.

Every year, Mars City Design, an online symposium in which scientists and futurists submit ideas relating to the human colonization of Mars, holds an international competition in which teams submit proposals for Martian colonies, each of which are judged on a different design aspect. This year’s first-place winner in architecture comes from M.I.T., whose team’s design for a Martian habitat is rooted in the structure of trees.

The “Redwood Forest” may not look exactly like a tree, but the concept is similar. The team, led by postdoctoral student Valentina Sumini and Assistant Professor Caitlyn Mueller, proposed a system of underground roots in which inhabitants would live and work. On the surface, an enclosed glass dome would collect energy from the Sun and serve as a greenhouse and public recreation area. Redwood Forest’s forest-like design relies on harvesting natural resources, including the Sun, regolith (soil) and water. “Designing a forest also symbolizes the potential for outward growth as nature spreads across the Martian landscape. Each tree habitat incorporates a branching structural system and an inflated membrane enclosure, anchored by tunneling roots. The design of a habitat can be generated using a computational form-finding and structural optimization workflow developed by the team. The design workflow is parametric, which means that each habitat is unique and contributes to a diverse forest of urban spaces,” Ms. Sumini, co-leader of the MIT team, explained in an interview with MIT news.

As proposed, Redwood Forest would be the first of potentially 200 tree-domes, each with its own unique culture and the ability to sustain up to 50 people. Interconnecting them could be a large step forward in the terraforming of Mars.  Terraforming Mars may eventually be achieved by creating a network of small habitats, given that Mars is completely inhospitable for human life. Its atmosphere is mostly carbon dioxide, but NASA’s 2020 rover will generate oxygen during its mission in 2020 as a first step for potentially making Mars more habitable. In Redwood Forest, however, this kind of artificial photosynthesis won’t be necessary, as trees and plants will generate oxygen and be used as food.

Naturally, water is the most crucial resource for human habitation. "Every tree habitat in Redwood Forest will collect energy from the sun and use it to process and transport the water throughout the tree, and every tree is designed as a water-rich environment," says Department of Aeronautics and Astronautics doctoral student George Lordos, the Systems Design and Management Fellow. In addition to being used for drinking and bathing, water will insulate Redwood Forest from solar radiation while moderating heat distribution. It will also be supplied to hydroponic ponds for growing plants and fish. Using solar panels, water will be split into hydrogen and oxygen “for the production of rocket fuel, oxygen, and for charging hydrogen fuel cells, which are necessary to power long-range vehicles as well as provide backup energy storage in case of dust storms," Mr. Lordos said.

But there’s more to Redwood Forest than on the surface. Redwood Forest’s biodome sits atop a network of underground roots, which function as living and working quarters for its residents.

Mars Is A Really Hostile Place

Living underground would protect those living in Redwood Forest from the unforgiving conditions on the Martian surface. Mars has a thin atmosphere composed mostly of carbon dioxide, and it’s 100 times thinner than Earth’s. Because the atmosphere is so thin, it’s extremely cold; the average surface temperature is minus 60 degrees Celsius but can reach as low as minus 125 at the poles. Though water flowed on the surface billions of years ago, eons of unchecked bombardment of solar radiation have left the Martian soil, known as regolith, corrosive and sterile.

Additionally, Mars has no magnetic field to shield it from cosmic rays and radiation from the Sun. Mars is also still subject to impacts from meteors which aren’t slowed down by the atmosphere, like they are on Earth. This turns even the smallest space rocks into big threats. By living in Redwood Forest’s network of roots, Martian settlers can minimize the risks of these ever-present hazards.

Mars is roughly twice as far from the Sun as the Earth, and its “year” lasts 687 Earth days. Because of the tilt of its rotational axis, Mars experiences four seasons. In the spring and summer, dust storms can cover the entire planet and last for months. Constructing underground living quarters and workspaces will protect people and equipment from dust and debris. Little adjustment would need to be made for the Martian day, however, which is close enough to ours at 24.6 hours.

There’s Just Something About Mars

Mars has captivated our collective imagination and veneration for millennia. Humanity continues to face existential and external threats, and our survival will eventually depend on establishing a new home somewhere outside Earth. Astronomer Percival Lowell, in his 19th century observations of Mars, documented what he described as “canals” on the surface. Though these canals turned out to be nothing more than impact craters, his work sparked popular interest in Mars being a potential alternative home to Earth.

A century later, inventor Nikola Tesla claimed to have received radio signals from Martians, which he claimed inspired many of his inventions and insights into electricity and magnetism. At the time, radio signals from space were unknown to science, but Tesla’s resolve was unshaken. “I think that nothing can be more important than interplanetary communication. It will certainly come someday, and the certitude that there are other human beings in the universe, working, suffering, struggling, like ourselves, will produce a magic effect on mankind and will form the foundation of a universal brotherhood that will last as long as humanity itself,” Tesla said in an interview with Time in 1931.

Perhaps most relevant to today’s global socio-political climate, however, is author Ray Bradbury’s collection of short stories “The Martian Chronicles,” in which he envisions Mars as the human race’s last haven after a global nuclear war in the early 21st century. In his work, Bradbury tells the story of settlers planting trees and establishing towns on the Red Planet to escape increasing authoritarianism on Earth. Mars-bound Earthlings clashed with native Martians, nearly wiping them out entirely. A perfect allegory of blind colonialism and militarism, “The Martian Chronicles,” at the very least, show that humanity cannot run from the problems it itself creates.