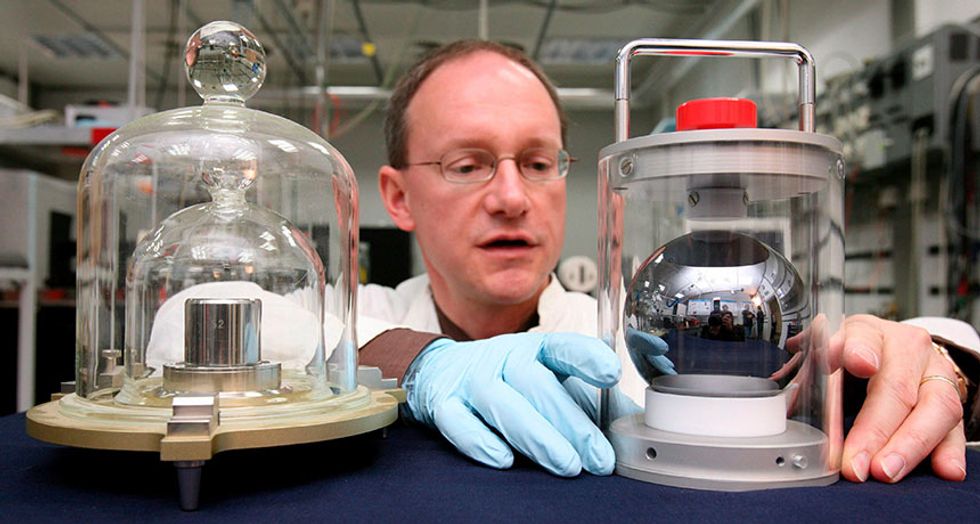 Facts may be up for debate these days, but science remains real and measurable. And those measurements are about to get a bit more precise. The International Committee for Weights and Measures has proposed the first update to the seven standard units of measurement in 50 years. The update, which would go into effect by the end of 2018, would change the weight of a kilogram to be defined by a constant property of nature, rather than by a made-up value.

The seven standard units of measurement are the second, meter, kilogram, ampere, kelvin, mole and candela. They are respectively used to measure time, distance, weight, electrical current, thermodynamic temperature, substance and luminosity. The kilogram is the only one defined in reference to a material artifact, rather than by a fundamental constant.

The kilogram is based on a 137-year old cylinder of palladium and iridium that is stored in a vault in Paris, known as the IPK, or international protype kilogram. All other weighed objects, from food items to human bodies, are measured in conformity to the weight of this cylinder.

However, scientists note that the weight of the cylinder is not constant (scratches or material that collects on its surface could alter it) and its basis is arbitrary and not scientifically significant. If humans were to make contact with aliens and compare systems of measurement, says physicist Stephan Schlamminger, “we’d be the laughingstock of the galaxy.”

Many of the units of measurement in the imperial system, used in the U.S., have a random or imprecise origin. The inch, for example, is based on the length of "three grains of barley, dry and round, placed end to end, lengthwise," according to a statute set by King Edward II of England in 1324.

Metrologists — a subset of scientists who study precise measurements — say scientific research can be more accurate and replicable when its measurements can be based on unchanging, fundamental constants of nature. The new units will reflect the modern understanding of physics, including the laws of quantum mechanics and Einstein’s theory of special relativity.

What will this update mean for people who are not metrologists? Not much. The adjustments are minute and will be undetectable to the general public. In the U.S., where the imperial system is still used, this new precision will largely be appreciated only in the scientific community, although the metric system is gradually creeping into American lives.

The change also draws attention to the fact that the U.S. still hasn’t adopted the metric system, which is now used around the world. When the idea of converting from the imperial system to the metric system was first introduced in Thomas Jefferson in 1789, it was met by resistance. Subsequent efforts, including one led by Alexander Graham Bell in 1906 and a Congress-approved 10-year plan authorizing a switch-over in the 1970s, flopped.

However, in a globally connected world, a unified system makes increasing sense, even in a suddenly isolationist-minded U.S. Global corporations already sell medications measured in grams, soda measured in liters and equipment that requiring metric tools. One system to measure them all would simplify product packaging, recipes, navigation, athletics and manufacturing, as well as science. Change may be coming, inch by inch.

In 2016, for instance, the Florida High School Athletics Association voted to make Florida the first U.S. school district to measure track and field events using the metric system, a change that will become mandatory in 2018. The change will put the district in line with collegiate and international competition.

But if the U.S. doggedly hangs on to the imperial system of measurements, it may find itself in some familiar company — Britain, the country that devised the imperialist system. As that country prepares to Brexit the European Union, it is contemplating a return to its imperialist roots in measurement too.