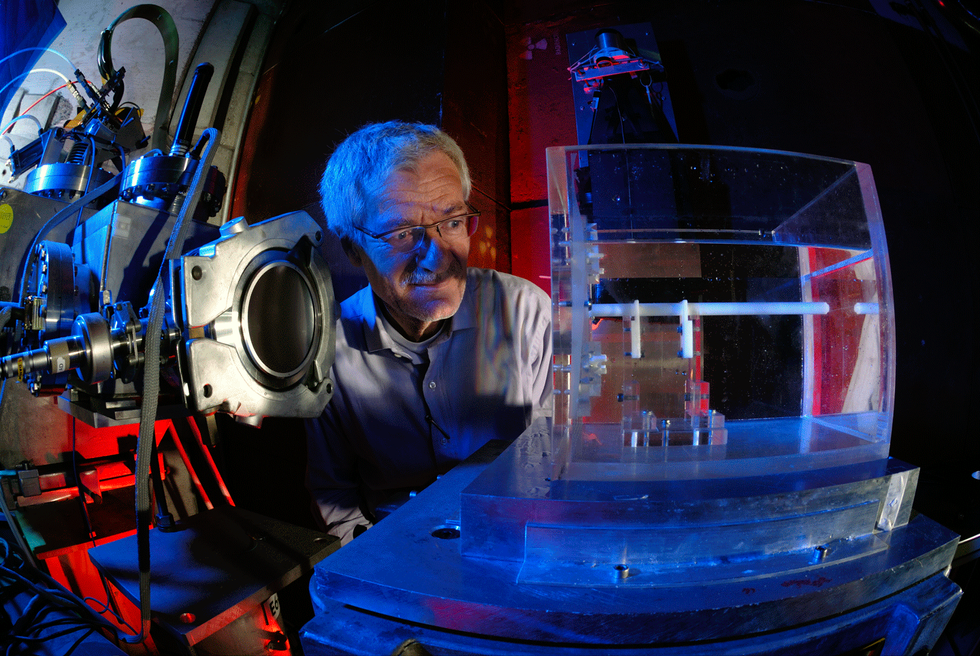 Physicists from CERN, the world's leading physics research center, have finally achieved a long held goal in quantum physics: being able to see and measure antimatter atoms. Antimatter must exist according to laws of physics, but is notoriously difficult to measure and study.

Antimatter—particles with opposite charge, but otherwise identical to, and paired with, particles of regular matter—may sound like a science-fiction concept, but physicists believe it’s a fundamental product of the Big Bang, which occurred 13.7 billion years ago. Makoto C. Fujiwara, head of particle physics at TRIUMF, Canada’s national laboratory for particle and nuclear physics, and a collaborator at CERN tells Second Nexus, “Physicists believe that anti-matter and matter are created in pairs, but we can’t find any antimatter in the universe in any substantial quantities.”

This is because matter and antimatter are partners in everything; they are thought to be created together, but they also destroy each other. “Whenever antimatter collides with matter they annihilate into a pure form of energy,” Fujiwara says. This energy manifests as light. “By measuring the amount of light in the universe we see that there’s about maybe ten billion times more light than matter,” he explains. This tells physicists that after the Big Bang, “Everything annihilated each other and only a tiny fraction survived.”

The question that keeps physicists up at night, Fujiwara says, is “Why is there something rather than nothing? Matter and antimatter are exactly the same in terms of properties, they just have different electrical charges.” In other words, there should be only light, no earth, no matter, or humans. The fact that matter exists has driven the very research that resulted in the study Fujiwara’s team just published in the journal Nature.

Fujiwara explains that physicists believe these laws of physics are so fundamental that discovering them to be false would shatter our perceptions of the universe, which is itself just one instance of nature being governed under these laws. “Laws of physics tell you that basic properties of matter and antimatter have to be exactly the same. So if you see any

differences, you would have to rewrite the laws of physics completely.” Being able to confirm this equivalency between antimatter and matter was necessary to validate this fundamental law of physics. To do that, physicists needed to be able to measure antimatter atoms.

They opted to study hydrogen atoms, specifically, since hydrogen is considered the most abundant element in our universe, and according to an article in CBC News, capable of being precisely measured up to 15 decimal places.

Fujiwara led the Anti-hydrogen Laser Physics Apparatus (ALPHA) team at CERN to create an antimatter “trap” and then used a laser to precisely measure the optical properties, or spectroscopic properties, of the trapped anti-hydrogen particles.

First they had to synthesize the antiprotons because “you can’t just buy them, they don’t exist naturally,” Fujiwara says. The CERN laboratory in Switzerland is the only place in the world, he says, that can create antimatter in any usable quantities. Creating them was only one part of the puzzle; antimatter atoms pose major difficulties in containment. For one thing, physicists can’t simply put antimatter into a container made of matter. “When antimatter atoms hit the walls of a container, which are made of matter, they annihilate, so we can’t have normal containers.” Instead, they use a technique called a “magnetic bottle.” By filling a vacuum with gas, and attaching a magnet, they can suspend anti-hydrogen atoms in the vacuum. Even after they create the container, capturing anti-hydrogen atoms “is very challenging,” Fujiwara says, since “you can only catch the slowest moving atoms because the force of the magnet is so weak.”

With the help of a function of the particle accelerator, the large hadron collider, they decelerated, or slowed down the antiprotons, and then mixed them with antipositrons to create anti-hydrogen. Fujiwara explains “When [the anti-hydrogen atoms] are moving slow enough we can actually capture them in this bottle.”

In past versions of this experiment, they’d only been able to catch at most one, maybe two anti-hydrogen atoms at a time. “Very recently we’ve been able to increase the number of

atoms by one order of magnitude to more like ten at a time. This was a really huge breakthrough,” he says.

Once the atoms were captured, they used a precision laser to measure the light spectrum of the anti-hydrogen (antimatter) and compare it with the light spectrum of hydrogen (matter). “Using laser beams you can measure the color and the wavelengths of the light very precisely,” he explains. And what they found, with the help of the precise laser, “is so far it looks the same as hydrogen.” For the first time ever, he says, “we have been able to take a laser measurement of antimatter atoms. Light measurements have been a dream come true for the field of antimatter studies.”

For Fujiwara, who has been working on this experiment for over twenty years, “it really was kind of a dream when I started out, so I was almost speechless when we finally succeeded.” This kind of experiment requires them to “push the limit of technologies all the time,” and results are not always imminent. He concedes that the experiment was only possible this time around because they’ve been able to build powerful enough lasers that can reveal the part of the spectrum that antimatter registers upon, which is not visible to the human eye.

From here, Fujiwara says they intend to continue to work on improving laser spectrometry and microwave spectrometry for future experiments to improve how much of the antimatter light spectrum can be seen.

Next, they plan to build the parts of a new experiment, called ALPHA-G, G for gravity. “The goal of this new project is to see if antimatter falls in the same way as matter does in gravity. Nobody has ever seen antimatter fall down.” He anticipates this will be a “big challenge” but is emboldened by the progress and technological advances that made measuring antimatter possible in the first place.

ALPHA-G will take some time just to construct, though they hope to begin the experiment at the end of 2017. “We’re trying to do something nobody has ever done, so you don’t know what how long it will take.” Meanwhile, Fujiwara is riding high on the team’s latest results. “It’s challenging and fun to be at the frontier of antimatter science.”