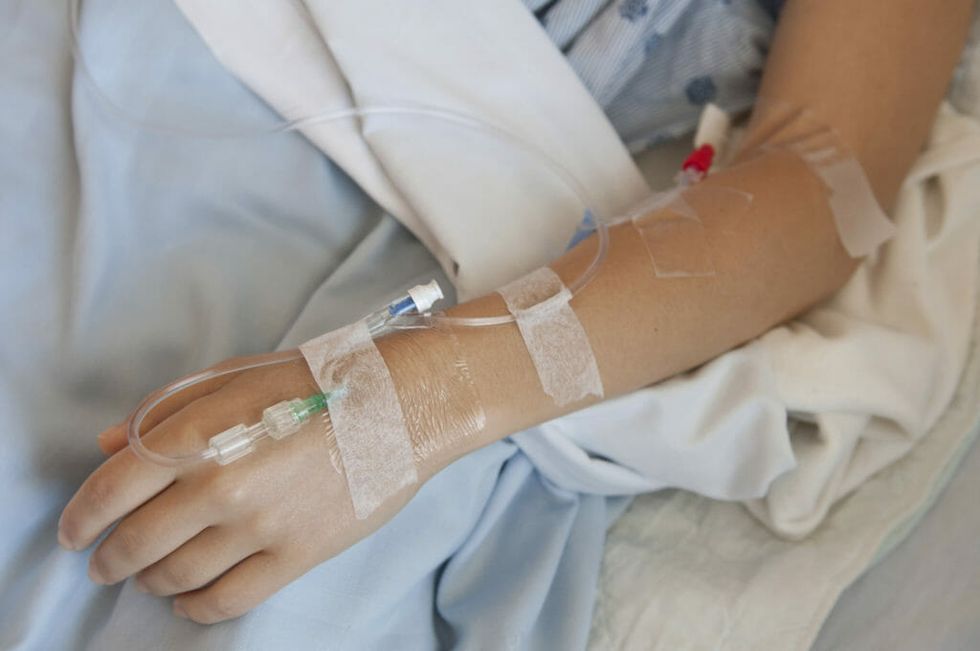 IV in Arm and Hand - Medical

A new immunotherapy has shown hugely promising results treating chronic lymphocytic leukemia (CLL), a mostly slow-growing type of cancer in which abnormal lymphocytes (a type of white blood cell) in the bone marrow become cancerous and spread into the blood.

In CLL, the leukemia cells often build up slowly over time and people may not show symptoms for years. Eventually, the cancer cells can spread to other parts of the body, such as the lymph nodes, liver, and spleen, and become harder to treat with traditional cancer regimens. Every year, the American Cancer Society reports about 20,110 new cases of the disease, and approximately 4,660 deaths are expected from CLL in 2017.

In July, researchers at Fred Hutchinson Cancer Research Center published the astonishing results of phase one of a clinical trial in which they treated this type of leukemia using experimental chimeric antigen receptor (CAR) T-cell immunotherapy. Their results were published in the Journal of Clinical Oncology.

CAR-T cell therapy is a type of immunotherapy in which clinicians extract a patient’s T-cells, which fight off pathogens and disease, from their blood. They genetically modify the cells to produce an artificial receptor, the CAR, which can recognize a protein encoded by the CD19 gene in humans and is a target on the leukemia cell surface. After the engineered T-cells are put back into the patient’s blood, they proliferate and seek out and kill cancer cells.

The researchers are thrilled to have a powerful new tool in their arsenal against what may seem like hopeless odds. “Patients who enroll on this trial “are extremely sick,” said Dr. Cameron Turtle, lead researcher on the study. “They’ve been through all conventional treatments that are available and likely to help them. Many of them have failed prior transplant, failed prior clinical trials. Some of them, despite their poor prognosis, are quite well when you look at them and talk to them, but others are really very, very sick and have a very short life expectancy.”

Fred Hutchinson is also one of a few medical centers that engineers specific subsets of cells from the patients, which allows the cell product to be uniform, so that patients are getting a reliable therapy that doesn’t deviate from batch to batch. They make a careful mixture of “helper” (CD4) and “killer” (CD8) T-cells, that have been engineered with a CD19-specific CAR to be more effective at killing the cancer cells they find. This also allows researchers to improve the doses they give patients, and also, potentially, to mediate the side effects.

They then load this cargo into a specialized virus that can effectively deliver the treatment right to the cells (without any live virus involved).

This first of two trials included a high-risk group of 24 patients whose cancer survival rates were not very good, as their cancer had not responded to their main form of treatment, a drug called ibrutinib. The patients ranged in age from 40 to 73 years. Their cancer had also been treated with a variety of other therapies, ranging from three to nine different kinds, with little success.

Four weeks after the CAR-T cell therapy, however, 17 out of 24 (71 percent) of the trial patients saw their tumors shrink or disappear altogether. Tumor shrinkage is measured by CT scans four weeks after treatment.

“It was not known whether CAR T-cells could be used to treat these high-risk CLL patients,” said lead author Dr. Cameron Turtlein a statement, an immunotherapy researcher at Fred Hutchinson. “Our study shows that CD19 CAR T-cells are a highly promising treatment for CLL patients who have failed ibrutinib.”

The higher the number of CAR T-cells in the blood after infusion, the more likely patients were to experience disease remission in the bone marrow. However, low, medium and high doses of the therapy were all effective at bringing about remission.

Last year, when the trial was first completed, Dr. Turtle spoke at the American Society of Hematology’s annual meeting,saying, “These are all heavily pretreated patients who’ve gone through many previous therapies,” Turtle said. “It’s very pleasing to see patients with refractory disease respond like this.”

His colleague and research partner Dr. David Maloney, also at Fred Hutchinson,said, “In early-phase trials, you’re continually learning. You don’t expect results like these from early-phase trials. That’s why these response rates are so extraordinary.”

However, while the success rate of CAR-T cell therapy was high, so were the side effects. Of the 24 patients, 20 suffered cytokine release syndrome, which includessuch symptoms as “systemic symptoms such as fever, nausea, chills, hypotension, tachycardia, asthenia, headache, rash, scratchy throat, and dyspnea....” Eight patients (33 percent) developedneurotoxicity. Most of these side effects were manageable or even reversible, except for two patients who became so ill they had to be admitted to the intensive care unit. One of those patients died.

Immediately, the research team stopped giving participants the highest dose level, and those participants with the most tumors received the lowest doses. This helped.

Turtle and colleagues were also able to identify biomarkers in the participants’ blood after infusion, which were linked with the development of the severe toxicities. These biomarkers will hopefully allow them to create tests that could prevent such toxicities from occurring, or head them off before they become too severe.

However, for Kristin Kleinhofer, diagnosed with leukemia in 2010, even the cytokine release syndrome, which brought her high fevers and low blood pressure for a week, was worth the aftermath: remission. She received her first infusion in November 2014.

Kleinhofer, who was only 36 at the time of diagnosis, had already enrolled in one clinical trial for an experimental chemotherapy at Stanford that did not work. In the meantime her doctors suggested she pursue a bone marrow transplant, if they could find a match. A bone marrow transplant is a radical option, as a patient’s cancerous blood and immune system must first be completely destroyed by chemotherapy and radiation, and then healthy donor cells are implanted. However, Kleinhofer’s donor match fell through and they couldn’t find another.

“You really don’t know how strong you are until something happens to you,” Kleinhofersaid. “No matter what, no matter where the journey led, I was going to go out fighting. I thought I would do everything I could, even if my life ended short.”

Having heard of CAR T-cell therapies during her journey through her cancer, she and her mother vigorously researched such clinical trials. When she was admitted to the Fred Hutchinson trial, her spirits rose.

“The trial gave me the hope that I could proceed to get into remission so I could get a [bone marrow] transplant,” Kleinhofersaid. “Which is now my next hope, that [my transplant] can give me the gift of more time until things are more figured out in the immunotherapy world.”

Follow up and further research will be necessary to determine if transplant is indeed the next step for patients who have received a CAR T-cell infusion.

“No one really knows the answer to that question,” Maloneysaid. “I think in some cases, CAR T cells will be enough to control the disease. But we don’t have enough confidence in that yet.”

Aside from great disease progress, their research also turned up what may be a better way of determining a patient’s prognosis after treatment. In order to assess if any cancer cells were left behind after receiving the therapy, the researchers analyzed samples of patients’ bone marrow using a genetic test called IGH deep sequencing. This essentially turns genetic markers into a bar code that allows researchers to keep track of the cancer cells as they make their way through the body.

Turtle and his colleagues sequenced twelve of the patients. Of that twelve, seven did not have any malignant genetic copies of the cancer cells. Those seven were disease free at the six and a half month mark after CAR T-cell infusion.

When they compared the IGH deep sequencing to the CT scan method of checking for tumors, they found that patients without malignant gene sequences in the bone marrow after CAR T-cell therapy was more likely to remain in remission. This suggests the deep sequencing test is a better predictor than a CT scan for assessing progression of the cancer. They believe this is the first study to suggest that link.

The trial is by no means over. The immunotherapy team at Fred Hutchinson continues to seek eligible patients with CLL, acute lymphoblastic leukemia and non-Hodgkin lymphoma for CD19 CAR T-cell trials. The patients must be able to attend Seattle Cancer Care Alliance.