Lamb Fetuses Grown in Plastic BioBag, Humans May Be Next 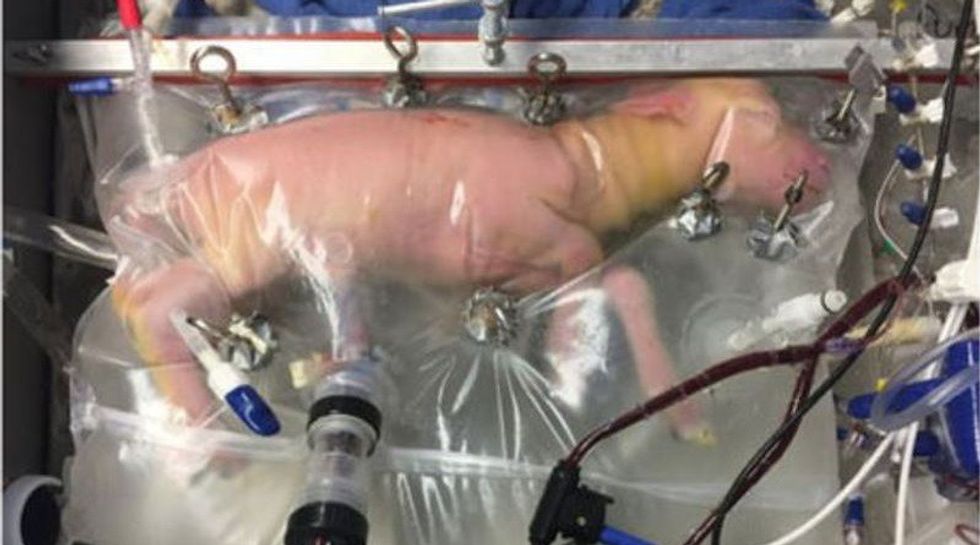 An artificial womb called BioBag has been demonstrated successfully with animals for the first time, an advance that could one day solve complications that critically premature human babies face outside the womb.

The lambs were the human equivalent of 23 weeks of gestation, appearing to develop normally inside a plastic bag filled with artificial amniotic fluid, the protective fluid which cushions a growing fetus. Within minutes of premature birth, scientists sealed each lamb in the BioBag, which links to a gas exchanger by their umbilical cord, replenishing their blood oxygen and infusing nutrients. The lambs breathed and swallowed the artificial amniotic fluid, which contained nutrients and chemicals which stimulated fetal growth.

HOW THEY DID IT AND WHY IT'S SIGNIFICANT

Over four weeks, scientists observed the lambs' lungs and brains growing. They also sprouted wool, opened their eyes, wiggled, and learned to swallow, according to the study, published in Nature Communications. At the end of four weeks, the researchers switched the lambs onto a regular ventilator similar to those used by premature babies in neonatal intensive care units (NICU). They observed that the lambs' health appeared nearly as good as a lamb the same age that had just been delivered by cesarean section. Afterward, all but one, which had developed enough to breathe on its own, were euthanized due to “animal protocol limitations rather than any instability,” and scientists examined their organs. Their lungs and brains appeared uninjured, as developed as they should be in a lamb that grew in a mother.

“This is real tomorrow’s world stuff,” says Neil Marlow, a professor of neonatal medicine at University College London. “They appear to have got lambs through four weeks which is a pretty momentous achievement.”

Extremely premature infants have "well documented, dismal outcomes," notes Dr. Alan Flake, a fetal surgeon at the Children’s Hospital of Philadelphia (CHOP) and the study's lead author. “If we can support growth and organ maturation for only a few weeks, we can dramatically improve outcomes for extremely premature babies,” he said.

Prematurity is the leading cause of death for newborns in the United States––and about 10 percent of babies born in the U.S. are born prematurely (born before they reach 37 weeks of pregnancy). Fully 6 percent, about 30,000 of these births, are considered critically premature (born before they reach 28 weeks of pregnancy). These infants require intensive care as they continue to develop outside their mothers' wombs. Those who survive delivery require mechanical ventilation, medications, and nutrients and fluids provided intravenously. Even so, many of those who make it outside intensive care (between 20 and 50 percent) still suffer from health conditions that arise from their stunted development.

According to neonatologist Elizabeth Rogers, co-director of the Intensive Care Nursery Follow-Up Program of UCSF Benioff Children's Hospital, who was not involved in the study, parents "have to make critical decisions about whether to use aggressive measures to keep these babies alive, or whether to allow for less painful, comfort care." These decisions have a steep cost. “One of the unspoken things in extreme preterm birth is that there are families who say, ‘If I had known the outcome for my baby could be this bad, I wouldn’t have chosen to put her through everything," she says.

Scientists have for decades attempted to develop an artificial womb that would emulate a more natural environment for premature babies to develop in.

One of the primary challenges was figuring out how to recreate the intricate circulatory system which connects a mother to her fetus. The mother's blood flows to the baby and back, exchanging oxygen for carbon dioxide. The blood must flow with enough pressure, but artificial pumps run the risk of damaging the baby's heart.

Dr. Flake and his colleagues solved the problem, developing a pumpless circulatory system that connected the fetus’s umbilical blood vessels to a new kind of oxygenator, moving blood smoothly through the system. Their creation was a success; the baby’s heartbeat was sufficient to power blood flow without another pump. They also found a way to reduce the risk of infection, which premature infants in open incubators face in NICUs. The artificial amniotic fluid flows in and out of BioBag just like it would in a uterus, removing waste and shielding the infant from infection.

WHAT DOES THIS MEAN FOR HUMANS?

Dr. Flake and his team admit the scientific community will need to conduct more testing before initiating human trials. The team has already started discussions with the U.S. Food and Drug Administration (FDA) and predicts that babies could be incubated in the system within three years in the first clinical trial. At the moment, the scientists are using BioBag on human-sized lambs and tracking the progress of those that survived after being taken off the ventilator. So far, the lambs seem healthy.

Colin Duncan, professor of reproductive medicine and science at the University of Edinburgh, praised the advance, but was more cautious about the timeline presented by Dr. Flake and his colleagues.

“The use of steroid injections for women at risk of delivering a premature baby to help accelerate foetal lung development was discovered using sheep models. It has improved the survival of premature babies worldwide and made a huge impact on obstetric and neonatal practice. That treatment took well over 20 years to get into clinical practice," he said.

Dr. Flake remains optimistic. “I’m still blown away, whenever I’m down looking at our lambs,” he says. “I think it’s just an amazing thing to sit there and watch the fetus on this support acting like it normally acts in the womb... It’s a really awe-inspiring endeavor to be able to continue normal gestation outside of the mom.”

The group has ruled out the prospect of an entire gestation taking place externally, quelling immediately any notion that human babies would develop as depicted in Aldous Huxley’s Brave New World, where babies are routinely birthed from artificial wombs.

“I don’t want this to be visualised as humans hanging on the walls in bags,” said Dr. Flake. “This is not how this device will work or look... The reality is that at the present time there’s no technology on the horizon. There’s nothing but the mother that’s able to support that [initial] period of time.”

“It’s so interesting, and it’s really innovative,” says Dr. Elizabeth Rogers. “To be able to continue to develop in an artificial environment can reduce the many problems caused by simply being born too early.”

She notes, however, that not every facility has the resources or expertise to offer the most advanced care to expecting mothers, and that BioBag does not provide a solution to this dilemma.

“We know there are already disparities after preterm birth," she says. "If you have access to high-level regionalized care your outcomes are often better than if you don’t... I think many people have been affected by preterm birth and they think this is going to be some magic bullet. And I think that prematurity is just really complicated.”