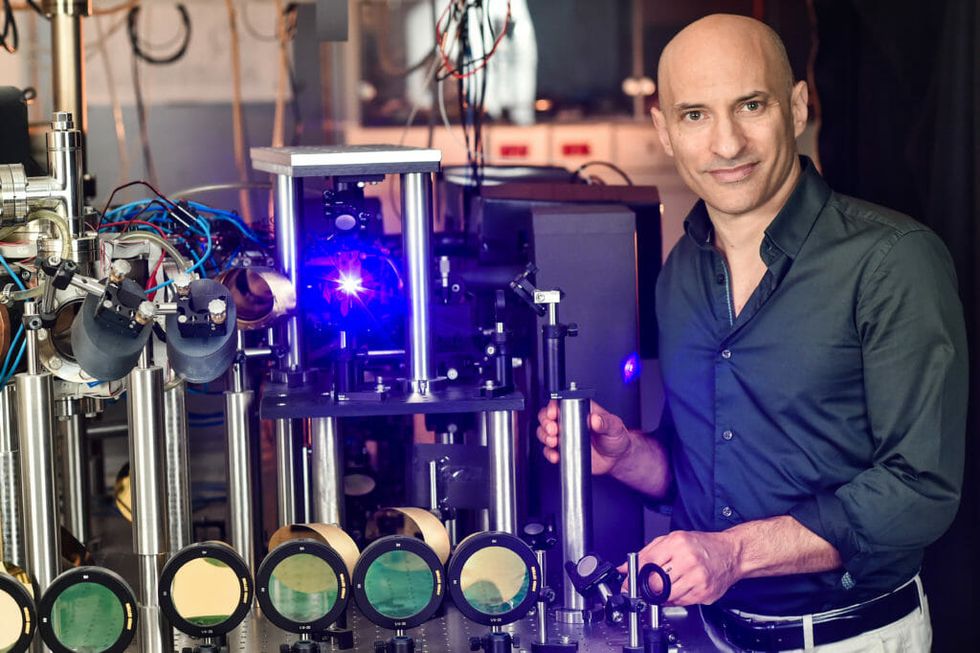 Famed physicist Stephen Hawking proposed in 1974 that very small amounts of high-energy radiation, in the form of entangled particle pairs, known as Hawking radiation, could theoretically escape a black hole. This was controversial as it went against the conventional understanding that nothing, not energy or light, could escape a black hole. Since 1981, however, when physicist William Unruh discovered that fluid flows could mimic black holes, the hunt for this elusive process has driven researchers to create analogue black holes to test the possibilities of particles behaving unusually at a black hole’s event horizon.

Though so far it has not been possible to create a true black hole in a lab, researchers have used sound waves to make “dumb” oracoustic black holes since 2009. In 2015, Jeff Steinhauer, a physicist at the Israel Institute of Technology in Haifa, who has been working on these black holes for the past seven years, is the first researcher to claim to have seen Hawking radiation in his lab-made, analogue black hole.

Acoustic black hole use sound waves—phonons—not photons, by cooling rubidium atoms to barely above zero. The atoms then share a “quantum connection,” says Steinhauer, “so that even when they are far apart, they still have a connection to each other, known as quantum entanglement, where the pair of atoms mimic each other’s behavior, clumping up to form aBose-Einstein condensate (BEC). He explains, “[The BEC] flows faster than the speed of sound, which means a sound wave trying to go against the flow falls back, which is analogous to a photon trying to escape a black hole.” He compares this to trying to swim against the direction of a river’s flow. “The river flows faster than you can swim, so you feel like you’re flowing forward, but you’re actually falling back.” This, he says, is like the sound waves, which are analogous to a light wave trying to escape a black hole.”

Hawking radiation makes the case that the universe is teeming with entangled particles. These particle pairs each contain an electron with a negative charge and a positron with a positive charge, which pop in and out of existence. If they come in contact, they will destroy each other, with one exception: if they should happen to appear at a black hole’s event horizon. There, he theorized, one particle falls into the hole, and the other dissipates into

space. This assumes that when the black hole eventually loses mass and evaporates, it also takes all the particles or “information” that fell into it with it, essentially destroying it. Steinhauer says the problem with this, which is known as the black hole information paradox, is that, “There’s a law of quantum mechanics that says information can’t be destroyed. So when information falls into a black hole, is it destroyed or does it exist in the hawking radiation coming out or somewhere else?”

Hawking published a theoreticalsolution to this problem earlier this year, suggesting that black holes may have a halo of soft hair around them capable of storing information, but no one knows for sure.

Others have theorized that the information is, in fact, contained in the Hawking radiation coming out of the black hole itself, which is what causes it to lose mass over time and dissipate. However Steinhauer argues that this conflicts with existing laws of physics, saying, “my work says there is a problem with that solution because outgoing particles are already entangled with in-falling particles, so they can’t be entangled with others,” he says.

Steinhauer and his research team ran their experiment 4600 times for six days straight, taking photos each time of the BEC to form a composite known as a “correlation function.” The composite image shows a very thin gray band, which, he says “means there are correlations between a point inside the black hole and outside the black hole. Waves are emitted from the horizon. The correlations between the waves falling in and coming out lets us see it.” Moreover, it’s the fact that the particles are in pairs that allow researchers to see that line. “My theoretical paper says if the gray band is narrow, the particles are entangled. They found that only high energy pairs were entangled, while low energy pairs were not. I knew immediately they were.” Thus, he is confident that he was seeing Hawking radiation for the first time.

In addition, the particles coming out of the acoustic black hole’s event horizon produced so much energy, their experiment may support “the firewall controversy”—yet another

hypothesis that suggests that the effort of breaking the entanglement between the Hawking particles and their partners creates actual flames at the edge of a black hole. “So I saw that the particles really were entangled in my black hole, which implied that there really is an issue to solve and one of the possible ways would be a firewall. It would naturally occur to preserve the laws of physics,” says Steinhauer.

While Steinhauer’s research team is understandably excited, the scientific community isn’t yet leaping up to confirm Hawking radiation yet, which will require further experiments to see if it can be replicated.

No one has ever created an actual black hole in a lab, says Harry E. Keller, PhD, President, Chief Science Officer and Founder of Smart Science Education. Nor has anyone been able to see Hawking radiation in space in a true black hole, which would make Hawking an instant candidate for a Nobel Prize. “Were such an artifact to be made, it would be so dangerous that it could swallow up our planet along with all of us.” Instead, this BEC, which he refers to as “a new state of matter beyond the usual gas, liquid, solid, and plasma” is in his estimation not a good enough analogue of a true black hole. He compares it to “playing with magnets to figure out how planetary systems work.” He continues, “The analogue experience might mimic the quantum mechanics of black holes and Hawking radiation, or it might not,” he says. “It’s still interesting in its own right.”

Steinhauer thinks it is more than a little bit interesting. “The point of seeing Hawking radiation is not to learn about black holes but to understand what the new laws of physics are.” Hawking was the first to combine gravity with quantum field theory to come up with the idea of Hawking radiation in the first place. “This combination is considered a first step on the road to a theory of quantum gravity,” Steinhauer says. “People have many ideas but nobody’s sure whose ideas are right.”