The Earliest Quasar Ever Observed Vastly Outshines Its Entire Galaxy

Earlier this month, a team of researchers published a report describing a supermassive black hole dating to just 690 million years after the Big Bang. 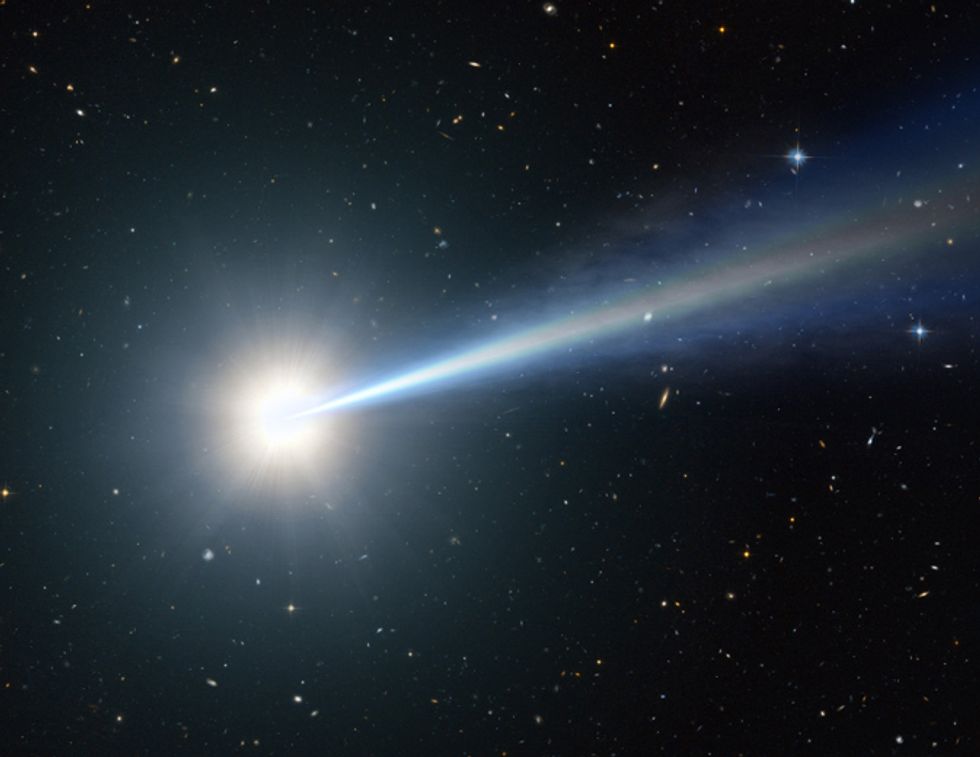 Artist’s impression of one of the most distant, oldest, brightest quasars ever seen hidden behind dust. (NASA/ESA/G.Bacon, STScI)

Earlier this month, a team of researchers published a report in Nature describing a supermassive black hole (SMBH) dating to just 690 million years after the Big Bang. The discovery of such a massive object from when the Universe was a mere five percent of its current age may hold clues as to how SMBHs and early galaxies evolved.

Imagine a place in which time (as we understand it) no longer has any meaning. Now imagine the mass of millions or billions of suns concentrated into a volume smaller than a proton, from which nothing, not even light, can escape. Einstein refused to believe such things could exist, despite predicting them in his General Theory of Relativity. We’re talking about black holes, of course. Black holes dominate the Universe; we wouldn’t exist without them. Our Milky Way galaxy contains millions of black holes, and a new one is born about once a century.

Most black holes are formed when giant stars go supernova. Their cores collapse under their own gravity into single point of no dimension and infinite gravity, known as the singularity. No known laws of physics can predict the conditions inside a singularity; neither relativity, nor quantum mechanics, which are seemingly incompatible with each other, can be applied to a singularity.

But the really large black holes, appropriately called supermassive black holes, sit at the center of most galaxies, including our own (estimates of the number of galaxies in the known Universe range from 100 billion to two trillion). Supermassive black holes contain millions to billions of times the mass of our Sun. The Milky Way’s central SMBH, Sagittarius A*, weighs in at four million solar masses. Although the origins of stellar-mass black holes are well-understood, the formation of SMBHs remains of the biggest mysteries in cosmology.

Quasars in the early Universe may help solve this problem.

Peering deep into the Universe is a journey back in time. SMBHs in the centers of young galaxies 13 billion years ago weren’t dark and quiet like they are today. In the early Universe, the centers of galaxies were wild and violent places. As their SMBHs grew by swallowing everything from dust to entire stars, they emitted titanic amounts of energy. As matter rapidly fell into a black hole, huge jets of cosmic rays were blasted into space for millions of years. Galaxies with active central supermassive black holes that emit these jets, which are thousands of light-years long, are known as quasars.

Quasars are the brightest objects in the Universe, often outshining their home galaxies by a factor of 1000. This is a result of friction from matter swirling around and falling into a black hole, in a zone known as an accretion disk. In the accretion disk, particles of matter are heated to millions of degrees as they whip around the black hole at nearly the speed of light. Once all the matter in the accretion disk is consumed, the quasar turns off. This process typically lasts 100 million to one billion years.

Quasars emit truly unimaginable amounts of energy. “This quasar has a bolometric luminosity of 4 × 1014L⊙ and a black hole mass of 8 × 108M⊙,” lead researcher Eduardo Bañados of The Observatories of the Carnegie Institution for Science, wrote in his report.The quasar, J1342+0928, contains 800 million solar masses and shines 400 trillion times brighter than the Sun. Figuring out how quasars grew so large so fast will help scientists explain how early galaxies formed.

How could a black hole grow so much so quickly? Quasars harbor clues.

When typical black holes form, it generally contains 50-100 solar masses and then grows as it consumes anything that strays too close. The problem facing cosmologists, however, is how a SMBH can become so massive in a (relatively) small amount of time.

“If you make it grow, feed it material like gas from its surroundings and let it grow for 690 million years, you wouldn’t be able to reach the size of this supermassive black hole,” Bañados explains in his report. “These are the quasars that currently place the strongest constraints on early black hole growth.”

Quasar J1342+0928 isn’t the most massive SMBH scientists have discovered, but it is the most distant. It’s certainly possible that even older quasars will be detected as telescopes and detection technologies advance.

Further analysis of J1342+0928, published in a December 2017 paper in The Astrophysical Journal Letters, may help explain how its SMBH got so big so quickly. According to the paper, the rapid, extreme growth of SMBHs has to do with how much matter was available and what kind of matter was sucked into the supermassive black hole.

Author Bram P. Venemans explains, “the ISM of this new quasar host galaxy is significantly enriched by metals, as evidenced by the detection of the [C ii] 158 μm cooling line and the underlying far-infrared (FIR) dust continuum emission.” This is astronomer-speak for the spectral patterns that are emitted from the galaxy itself. When light passes through clouds of gas and dust in the interstellar medium (ISM), certain wavelengths are blocked and appear as absorption lines inside the spectrum. Different elements block different wavelengths of light, and from this, astronomers can determine the composition of a galaxy… or through whatever the light happens to be traveling.

The spectra from quasar J1342+0928 indicate the presence of metals in its accretion disk. Since metals are formed in the cores of giant stars, their presence indicates a high level of star formation and destruction. Giant stars live relatively short lives; the bigger the star, the faster it burns through its fuel. Stars in the early Universe were typically more massive than stars today, ending their lives in spectacular supernova explosions after only a few million years. For comparison, our Sun will shine for 10-12 billion years.

Venemans’ study concludes “star formation rates of 85–545 M ☉ yr−1 in the host, consistent with the values derived from the dust continuum. Indeed, an episode of such past high star formation is needed to explain the presence of ~108 M ☉ of dust implied by the observations.” In other words, J1342+0928 experienced a very high rate of star formation every year for hundreds of millions of years. A high rate of star formation and the resulting material, including the metals identified by Venemans and his team, explain how this particular quasar grew to such immense size in a relatively short span of time. It both needed and had a lot of material to consume. To put this into some perspective, the star formation rate in the Milky Way averages around one per year.

We would not exist without supermassive black holes.

Since supermassive black holes lie at the center of most galaxies, including our own, it’s safe to say that we owe our existence to them. Without them, neither our galaxy nor our solar system could have formed. One of the more interesting but not-yet-understood concepts in astronomy is how early galaxies formed, as well as which came first; the galaxy or the supermassive black hole? Our galaxy is more than three billion years younger than quasar J1342+0928 and its host galaxy, and was formed via “interstellar recycling” and merging with smaller, older galaxies. The Milky Way’s central SMBH, Sagittarius A*, grew to its present size by swallowing other black holes. At four million solar masses, it’s toward the smaller side on the supermassive black hole scale.

Studying quasars on the other end of the Universe will help scientists understand the relationships between galaxies in the young Universe and supermassive black holes. We live in the perfect time to pursue our origins; in a few billion years, the Universe will be expanding so rapidly that no other galaxies will be visible to observers in the Milky Way. We are, in the most literal sense, the Universe understanding itself before, it too gradually fades into darkness.