Our Consumption of Iodized Salt Is on the Decline, Will Our IQs Follow? 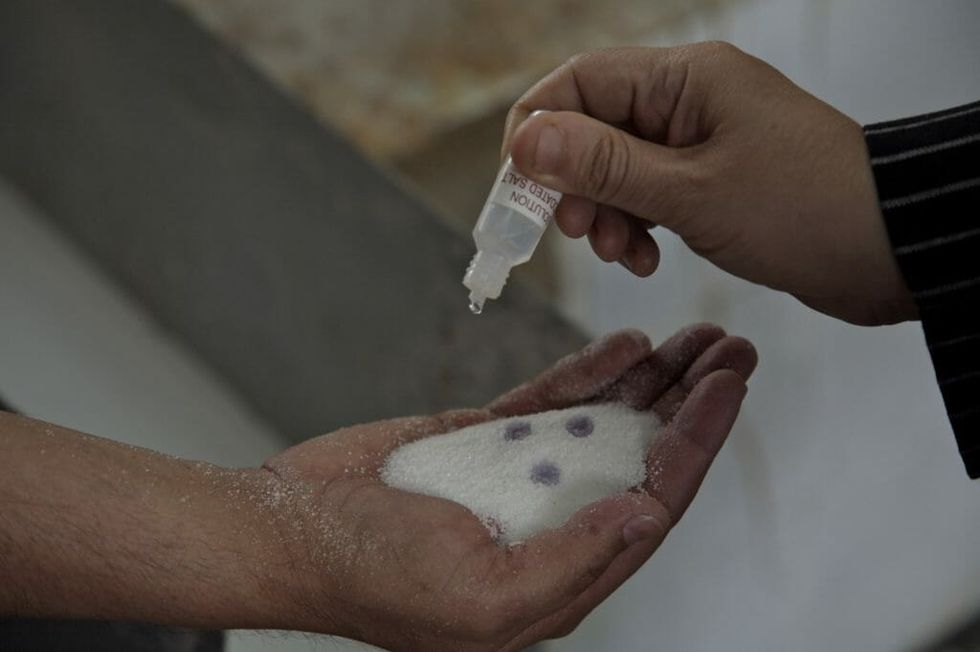 A man tests iodine in salt during a monitoring visit in a salt market in Alexandria, Egypt. June 4, 2007. (Majority World/UIG via Getty Images)

While the medical community disagrees about the value of many nutritional supplements, some added nutrients have made an undeniable impact on public health — including one that has the power to raise IQs. Iodine is a critical micronutrient that humans require for good health, successful reproduction and healthy brain development.

Iodine deficiency leads to problems with the thyroid, including cancer, hypothyroidism and goiter. Goiter is a condition in which the thyroid swells up and is visible in the neck, causing swallowing and respiratory problems. In children, iodine deficiency is a leading cause of stunted body growth and intellectual deficiencies, including mental handicaps. The problem isn’t just limited to the developing world; Europe has one-fifth of the world’s iodine deficiency cases.

While iodine naturally occurs in many foods, including fish, dairy products and vegetables grown in coastal areas, it is naturally scarce in many places. Until 1924, iodine deficiency was a leading cause of health issues in the United States, including widespread goiter in the Great Lakes, Appalachians, and Pacific Northwest — sometimes called the goiter belt — until the Morton Salt Company started adding the ingredient to common table salt. Two years earlier, Switzerland mandated that salt be fortified with iodine after the country found that 30 percent of its young men were unfit for military service due to goiter, and since then, around 120 countries around the world have implemented iodine supplementation programs. At a cost of only $0.05 cents per person per year, it’s a remarkably cheap public health initiative with tremendous benefits.

Today, however, our changing dietary habits may be causing increasing levels of iodine deficiency again. Worries about hypertension have caused many Americans to limit salt in their diets, and the popularity of non-iodinized sea salt in cooking has led to decreased levels of iodine in others. Changes to the way wheat is processed in recent years also reduced the amount of iodine in flour. Additionally, the proliferation of processed foods in the American diet means that many people can’t say how much iodine they are actually getting — while it is added to table salt, food processors typically use salt that that is not fortified with iodine. In other words, eating more chips won’t get you this vital nutrient.

Drinking milk will — as long as it’s cow’s milk. The amount of iodine in milk substitutes is very low; Cows’ milk provides around 70μg (micrograms) per glass, a considerable proportion of the daily recommended 150μg iodine intake recommended for adults. A glass of milk substitute may provide only around two micrograms. As milk substitutes like almond milk and soy milk become more popular, some nutrition experts are becoming concerned that pregnant woman who favor these alternatives aren’t getting enough iodine to facilitate proper brain development in their babies.

Between 1971 and 2001, the iodine intake in the US dropped by 50 percent. The effects on public health could be significant. A National Institutes of Child Health and Human Development study found that women who were deficient in iodine had more fertility problems — and only 56 percent of American women had adequate iodine levels. Doctors recommend that women take prenatal vitamins with iodine for three months before trying to become pregnant.

Another curious twist to the story of iodine: Iodine is derives from potassium iodide, a salt of stable iodine that is suddenly the hottest supplement in the US, because it is believed by some to protect against radiation poisoning in the event of a nuclear bomb attack. As tensions between Donald Trump and North Korean leader Kim Jong-Um escalate, sales of potassium iodide are skyrocketing.

“On January 2, I basically got in a month’s supply of potassium iodide and I sold out in 48 hours,” said Troy Jones, who runs the website nukepills.com. Alan Morris, president of the pharmaceutical firm Anbex Inc., which sells potassium iodide, also says sales have increased. “We are a wonderful barometer of the level of anxiety in the country,” he said.

But will it save you? Potassium iodide could prevent your thyroid from absorbing radioactive iodine released in a nuclear attack or in the event of a nuclear power plant accident, but it won’t protect other parts of your body. "[It is a reasonable treatment, but it is certainly not the entire story," said James J. Galligan, Ph.D., a professor of pharmacology and toxicology and director of the neuroscience program at Michigan State University. "People must protect themselves from the other risks.”

If you don’t have access to potassium iodide, iodized salt isn’t a reasonable alternative. However, antacids may be. Plus, stockpiling those will be useful if worrying over nuclear war is giving you heartburn.