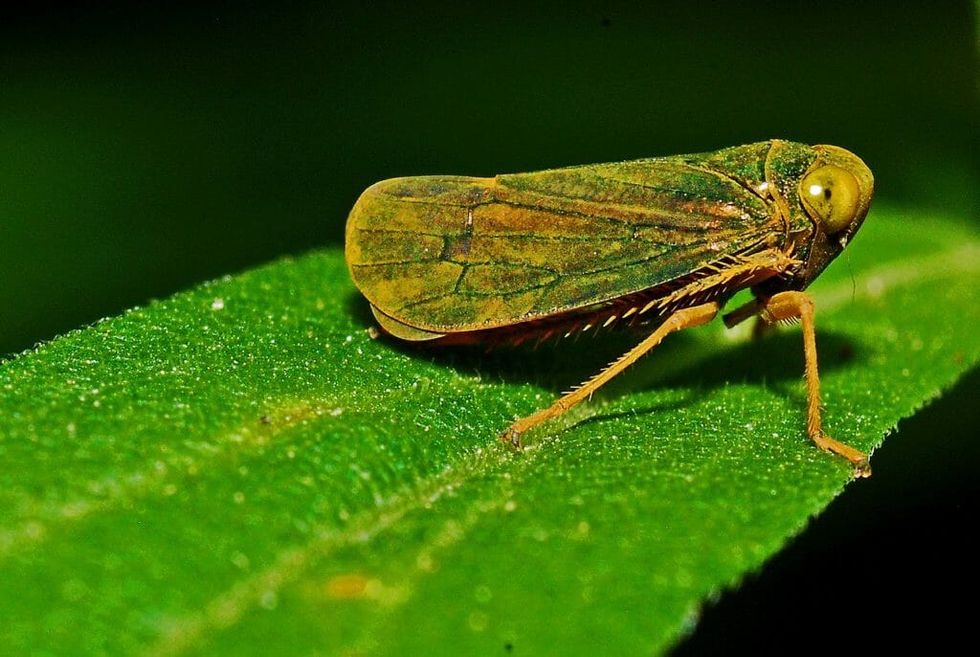 Invisibility has long been a staple of science fiction and fantasy. Just ask Harry about his cloak and Frodo about a certain ring. Or talk to any true Trekkie about subspace disturbances caused by a Romulan or Klingon cloaking device. Now bug sweat has science one step closer to developing an actual Cloak of Invisibility.

Nature abounds with a menagerie of animals capable of blending with their surroundings, either for survival or for hunting. These camouflaging creatures range from a gliding lizard in India, whose speckled brownish-grey dorsal side matches perfectly with tree bark, to octopuses adjusting the size of their pigment cells to change their exterior color to blend with any background they rest on. But it is the unique method of camouflage demonstrated by an insect that have scientists thinking they can develop real-world cloaking applications for humans.

Leafhopper insects are any species of the family Cicadellidae, colloquially known as hoppers, that feed on the plant sap of grass, shrubs, and trees. And while insects don't have sweat glands, these hoppers do secrete onto their outer surface microparticles that cloak them and their eggs, keeping them hidden from predators. Inspired by this phenomenon, engineers at Penn State University have designed a synthetic material that mimics this special ability.

These microparticles are called brochosomes, and we already knew that their superhydrophobic nature repels water. This keeps the insects’ wings dry in wet environments. But when the engineers at Penn State looked closer at these brochosomes, they discovered that the microparticles also act as camouflage, affecting and altering wavelengths of light. Essentially, they form a nano-linked cloaking device shield around the insect.

In a Penn State statement released in early November, the engineers identified their own recently-developed synthetic microspheres as ideal candidates for antireflective coatings, due to their nanoscales holes capable of absorbing light from all directions across a wide range of frequencies. But it wasn’t until someone on the team made an offhanded comment that they realized the potential. Tak-Sing Wong, assistant professor of mechanical engineering, explains:

"We didn't know, until my former postdoc and lead author of the study Shikuan Yang brought it up in a group meeting, that the leaf hopper made these non-sticky coatings with a natural structure very similar to our synthetic ones. That led us to wonder how the leaf hopper used these particles in nature."

Existing scientific literature was a blank page on the leafhoppers’ camouflage capabilities, but the engineers found in their own research that the particle surface of the brochosomes acts like a “metamaterial,” a type of material that could be used in cloaking devices. "The problem is that in the field, these leaf hoppers produce very little of this product, and it is very hard to collect," Wong said. "But we had already produced large quantities of these structures in the lab, enough to put inside a machine to look at their optical properties."

Wong and his engineering team published their study last month in Nature Communications. The study describes the designing of a synthetic material, via a process called electrochemical deposition, that mimics the leafhoppers’ brochosomes. The artificial brochosomes were then placed on leaves and observed with simulated insect vision. By capturing up to 99 percent of spectrum light detectable by insects, the artificial brochosomes successfully blended into their background.

The potential application of this discovery is widespread, from creating better batteries and anti-reflective coatings for sensor and cameras, to increasing light capture for solar cells. "This paper is more of a fundamental study," Wong cautions. "In the future, we may try to extend the structure to longer wavelengths. If we made the structure a little larger, could it absorb longer electromagnetic waves such as mid-infrared and open up further applications in sensing and energy harvesting?"

So while Wong and his team look to be more than a few years off from building a human-sized invisibility cloak — sorry, Harry Potter fans — they are not the only ones exploring synthetic camouflage. Back in 2014, scientists at the University of Houston and University of Illinois (Urbana–Champaign) created an artificial light-reactive skin, inspired by the color-changing skin of an octopus, that could then be used as an electronic camouflage cloak. Also inspired by the shape-shifting, Cornell University engineers are currently developing their own camouflage method using programmable 3D, silicone materials.

But it would be, say, so much cooler to have a Cloak of Invisibility made out of synthetic bug sweat.