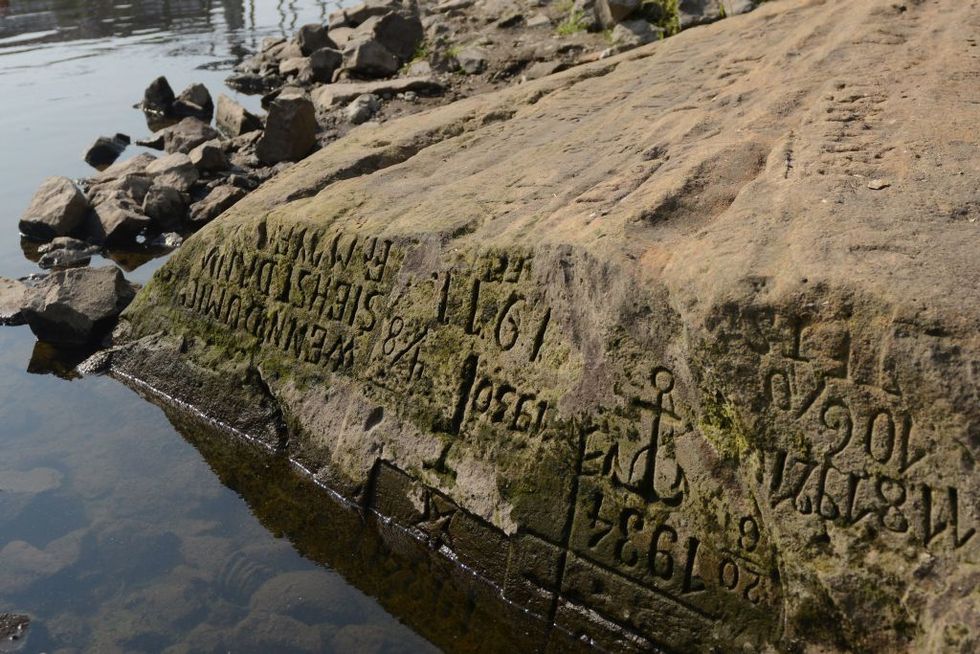 The so-called "Hunger Stone" is pictured in Decin, Czech Republic on August 29, 2018, by the low water level of the Elbe river. - Once an ominous harbinger of low water and hard times for rafters on the Elbe river, this summer a massive boulder known as the "Hunger stone" in the Czech city of Decin has warned of the record drought spanning much of Europe. (MICHAL CIZEK/AFP/Getty Images)

Hard times are coming for Europe, according to a century-old rock in the middle of the Elbe River in the Czech Republic. Known as a “hunger stone,” the rock is inscribed with the words, “Wenn du mich siehst, dann weine” or"If you can see me, then weep."

The stone, roughly the size of a van, was inscribed in 1904 by a boatman whose work dried up that year when the river bed became too shallow to support boat traffic. About 20 such boulders, engraved with markers and dates going back to 1616, lie under the waters of the Elbe, a major central European waterway running from the Czech Republic through Germany to the North Sea. Plummeting river levels have exposed them.

"Over the centuries, many people earned their living on the Elbe as rafters, and when there wasn't enough water to float their rafts, they lost their livelihoods," said Vlastimil Pazourek, head of the museum in Decin, a town just north of Prague, where the stone appeared. "The rafters engraved the dates of those bad years on the soft sandstone boulders typical for this region, hence the name 'hunger stone.'” The stones are being exposed again, and this time scientists say it’s not just a bad year, but a sign of an ongoing shift in water resources occurring across the globe due to climate change.

Low water levels revealed the stone and its legend this summer after the hottest summer since record-keeping began in 1775. The water level dropped to just 2.9 feet deep at the end of August after the long, hot and very dry summer, making large-scale river transport impossible. Although the riverbed has been artificially deepened to facilitate cargo transport, its water levels have continued to drop. In the 1990s, around five million tons of goods were transported on the Elbe each year, but the figure has dramatically fallen to less than a million tons in recent years due to low water. Experts say ebbing river levels will become the norm in coming years.

"Due to climate change, low river levels will be even more frequent," said hydrology specialist Tobias Conradt. "What we consider extreme today will become an everyday reality in the decades to come.”

As the river has dried up, other bits of history are coming to the surface, including munitions from World War II. So far 22 grenades, mines and other explosives have been found in the Elbe this year. "We ascribe that to the low water level. That's pretty clear," said police spokeswoman Grit Merker. Police have warned people against touching the weapons, some of which are unexploded, although so corroded they present a low risk. After World War II many explosives were dumped into the Elbe, which flows from the Krkonose Mountains in the Czech Republic near the border with Poland to Hamburg in Germany's north.

Low water levels and rising temperatures, along with pollution and overfishing, have also impacted the Elbe’s fish stocks. In an analysis of long-term data on fish stocks in the Upper Danube, Elbe, and Main rivers, a team of German researchers concluded that native fish species in these rivers are on the verge of extinction. All is not dead in the waters, however; populations of some invasive species are increasing.

"In the future, we will have to be prepared to encounter increasing numbers of water bodies with new biological communities consisting of a mixture of species that would never naturally meet," says Jürgen Geist, professor at the Department of Aquatic Systems Biology and head of the study.

The Czech Republic, Germany, UK, and other Western European countries suffered great damage in last summer’s drought. Around 94 percent of Czech farmers reported severe crop damage, estimated at $408-500 million, according to the Agrarian Chamber. These crop shortages led to fodder shortages that forced many to slaughter their livestock.

"This year we have the lowest harvest of the century," said Udo Hemmerling, Deputy Secretary General of German Farmers Association. "We have had very severe losses, especially in northern and eastern Germany, and our neighbors in Scandinavia and Poland are seeing the same bad situation.”

Consumers are likely to feel the impact on grocery prices as this year’s harvests come in short. British farmers say they suffered a 10-15 percent drop in potato harvests, French fries (or chips) will be about 1” shorter, due to the smaller size of potatoes grown in drought conditions.

“The soils are very dry, it does not make it easy for farmers to work,” said Pierre Lebrun, the coordinator of the potato sector of Wallonia, Belgium. “We will all eat small fries. We are all in the same boat.”

However, dry, hot conditions have been good for one industry: Grape growers who specialize in champagne report a bumper crop. Additionally, in recent years farmers have been able to harvest them about two weeks earlier than they could 20 years ago.

“With the evolution of climate, things have been moving in the good way, so less rain, more sun, warmer temperatures, less frost. At this moment and for about the last 15 years, the impact has been positive," said Vincent Chaperon, a cellar master at Dom Perignon Champagne. In Australia, which is also suffering under a drought, grapes have been small but intensely flavored, which leads to great vintages.

“No rain means the berries are much smaller ... if the grapes or berries are smaller, their intensity is much higher, so they’re much richer,” said Vince Salpietro, managing director of wine merchant Grand Cru. “But there is a point where if there is no rain at all, the vine really, really struggles along and the vines will effectively shut down and not produce anything.”

In other words, if climate trends continue, we’ll see the best vintages ever in the next few years. The downside: They may also be the last ones to be produced in some traditional grape-growing areas that are now drying up.