This Grad Student's Algorithm Helped Create the First Image of a Black Hole, and Her Reaction At First Seeing It Is Everything 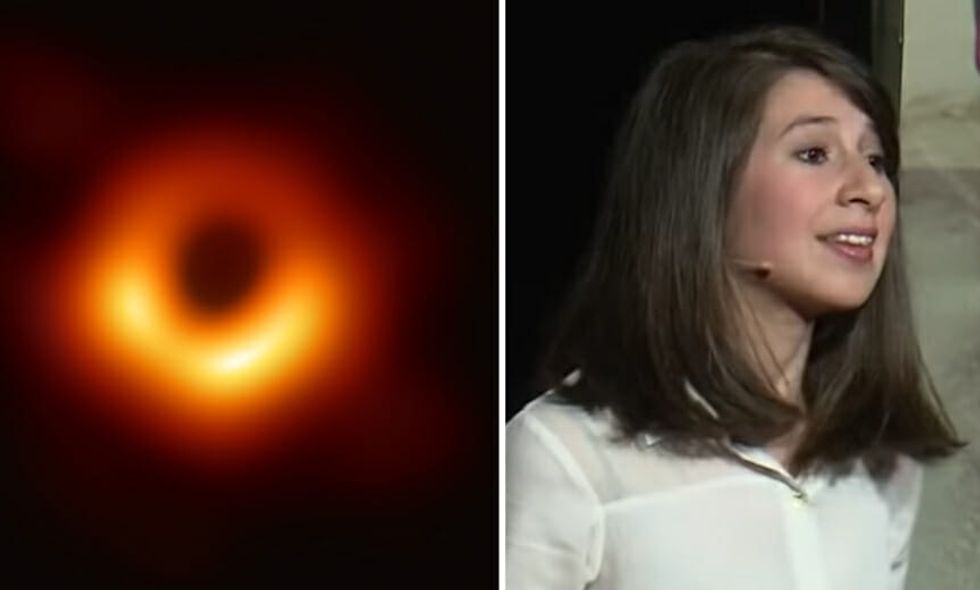 For the first time ever, humans saw a photo of a black hole on Tuesday.

Fifty million lightyears stretched between our home planet and the black hole's greedy event horizon, but with ten radio telescopes, hundreds of scientists, and one revelatory algorithm, the distance vanished as stunningly as light in the subject the researchers sought to capture.

While globally interconnected telescopes assembling images from microscopic photons is nothing to sneer at, it was the algorithm (and others built off of it) that sorted from infinite fragments the images researchers were after, making the viral image possible.

That algorithm was developed three years ago by MIT grad student Dr. Katie Bouman, who worked with 200 scientists and the Event Horizon Telescope to generate the final assembly. She soon posted a photo on Facebook of her reaction to the triumphant moment the image was first assembled.

The formula informing the original algorithm informed many others that helped bring scientific assurance of its effectiveness to researchers.

"We didn’t want to just develop one algorithm. We wanted to develop many different algorithms that all have different assumptions built into them. If all of them recover the same general structure, then that builds your confidence. No matter what we did, you would have to bend over backwards crazy to get something that wasn’t this ring.”

Bouman made sure to credit the various researchers whose work helped lead to this most recent landmark of human ingenuity.

The photo of Bauman's first reaction has quickly gone viral.

Another image of Bouman placed alongside a historical parallel is taking the internet by storm as well.

Bouman is being compared to Margaret Hamilton—whose coding is partially credited with achieving the moon landing.

People can't stop sharing an image of Hamilton standing next to stacks of the handwritten coding placed side-by-side with one of Bouman next to stacks of hard drives forming the roughly 5 million gigabytes used to achieve the black hole images.

The image led people to share some of the great women of science whose achievements also paved the way for Hamilton and, now, Bouman.

Women have been at the forefront of humanity’s exploration of the cosmos, writing the codes that enabled us to pict… https://t.co/bKqwrSD8ta
— Robert Falconer (@Robert Falconer) 1554937463.0

Girls don't just run the world, they're revealing the universe.