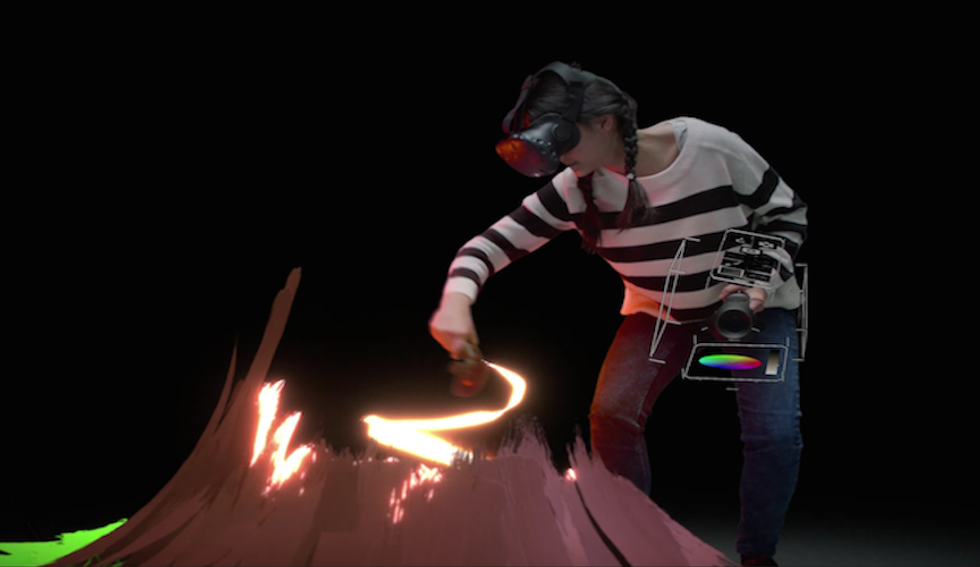 Tilt Brush, Google’s virtual reality painting app, allows painters, architects, and even fashion designers to craft multidimensional art with only a wave of their hands. The technology could permanently redefine the way artists conceptualize and render their work. Virtual reality development has traditionally focused on the gamer market; though the technology's complete range of applications is not yet known, early reports suggest the app's accessibility and appeal extend beyond that niche.

Users wearing a connected HTC Vive headset can create 3D imagery with a controller that works just like a paintbrush. A virtual palette provides the user with different brush types; multiple colors are also at their disposal. But drawing is not limited to conventional materials. "Your room is a blank slate. You can step around, in and through your drawings as you go. And, because it’s in virtual reality, you can even choose to use otherwise-impossible materials like fire, stars or snowflakes," Google said in a blog post.

"Tilt Brush, at its core, is a virtual reality painting application. It creates something anyone can use, intuitively, for kids, artists, and absolutely anyone," said Drew Skillman, the app's co-developer. "Within the first 30 or 45 seconds, anyone can start VR painting and making marks in space all around them... It allows everyone to see how powerful VR is and how transformative it will be."

Last year, Google demonstrated some of the app's capabilities to a select group of artists through its Lab at the Google Cultural Institute in Paris. The reaction was overwhelmingly positive. "I had this idea of what I wanted to do, but when I entered the virtual space, at that moment everything changed," said calligrapher Said Dokins.

The app proved an enticing draw for installation artists in particular. "What really struck me was the ability that this has to be a platform for installation in museum and gallery spaces," said artist Jorge Rodriguez-Gerada. Graffiti artist Chu agreed; he predicted that Tilt Brush

will "revolutionize how people are going to view immersive artworks."

The app's immersive qualities could reshape the entire fashion industry. Tilt Brush allows illustrators to paint with textured fabrics, such as denim and leather. Designers can survey their creations as they work, walking through them, around them and viewing them from every imaginable angle. They can share these designs with other Tilt Brush users around the world.

But designer and visualiser Olivier Demangel went further, predicting a revolution in the world of architecture. Architects, he says, will design with 3D goggles and convene with their clients over detailed virtual models. "Interactivity means you can experiment with a lot of different options — design, materials, lighting, weather — very quickly," he said. "When VR tech matures, it's going be more powerful than cocaine."

Tilt Brush is not the first app of its kind, says writer Keith Williams, noting that "there are other competing virtual reality art apps such as Oculus's Quill and Medium." But Tilt Brush "has been both exposed to the largest audience and has—as of press time in early 2016—the widest availability."

“What caught my attention was how simple it was to use, both in early demos I tried out and in the final version at the trade show,” he writes. “There weren’t any complicated rules to figure out or demonstrations to acclimate me to the virtual world. All it took to get me creating art in three dimensions all around me was a few words of instructions from someone who used the app before… it was swift, immersive, and altogether awesome.”

Google acquired the app when it bought out its developers Skillman & Hackett last year. Tilt Brush is only available on HTC Vive, but the company expects the app to expand to other platforms in the future.