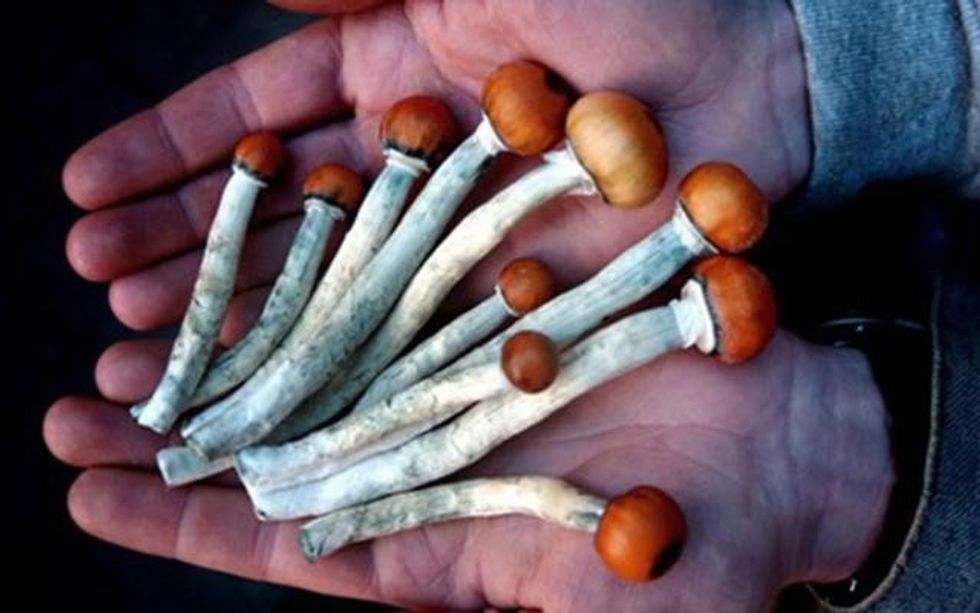 The first clinical trial to use psilocybin, the active compound in “magic mushrooms,” to treat major depression shows promise in a small but breakthrough study. Researchers from Imperial College London gave psilocybin to 12 people suffering from severe depression. One week after receiving an oral dose of the compound, each participant exhibited significant improvement in symptoms. The study further demonstrated psilocybin’s safety in a supervised setting.

Six men and six women suffering from chronic, treatment-resistant depression took two doses of psilocybin (10 mg and 25 mg) separated by one week. Each participant had experienced major depression for 17.8 years on average and none of them had responded to standard treatment, such as selective serotonin reuptake inhibitors (SSRIs) or electroconvulsive therapy. Three months later, five of the participants were in complete remission. If larger studies confirm these findings, medical professionals treating those who don’t respond to therapy or traditional medications may have a new and powerful tool.

The study did not have a control group, and the participants received psychological support before, during and after each session. The participants relaxed on a bed and listened to music through earphones during each dosing session. Researchers monitored blood pressure, heart rate, and the compound’s psychoactive effects. For the most part, according to the study, the participants went on their own “inner journey” without interruption or interference. None of the participants required medical intervention due to negative side-effects. Some reported experiencing mild anxiety or nausea. The psychedelic effects of the dosage peaked after two to three hours. Most remarkably, eight of the 12 participants met the criteria for remission from depression one week after the two treatments. Relative to baseline, five participants were in complete remission after three months and two others continued to show improvement.

The results are not without some caveats. The study might be biased, some note, because certain participants

admitted taking psilocybin at least once before. Past experience with psilocybin and its effects might have increased suggestibility and expectancy in participants, thereby affecting the outcome. Further studies can address these problems through the inclusion of a control group or by conducting a double-blind study, in which any information that may influence the behavior of the tester or the subject is withheld until after the test.

“You cannot conclude from this trial that psilocybin is a treatment for depression because there could be other reasons people responded, including the psychotherapy treatment [that accompanied the experimental treatment] and expectancy biases which can be part of this placebo effect,” says Dr. Stephen Ross, director of the Psychedelic Research Group at NYU Langone Medical Center. Dr. Ross is conducting his own clinical trials on psilocybin’s effects on cancer-related depression.

Robin Carhart-Harris is a neuropsychopharmacologist at Imperial College London and one of the authors of the study. The study, he says, does not suggest that doctors should not use psilocybin as a last resort for their depressed patients. “That is pretty remarkable in the context of currently available treatments,” he said. “Our conclusion is more sober than that—we are simply saying that this is doable. We can give psilocybin to depressed patients, they can tolerate it, and it is safe. This gives us an initial impression of the effectiveness of the treatment.”

However, previous studies have shown that psilocybin could be a viable treatment for anxiety, obsessive-compulsive behavior and addiction. Research suggests psilocybin is not an independent risk factor for mental health problems. Nevertheless, demonstrating the safety of psilocybin in a clinical setting was tricky. “Magic Mushrooms” are a Class A Illegal Drug in the United Kingdom. This is the harshest category, which also includes heroin and cocaine. The ethics committee that granted approval for the trial expressed concern that participants could experience delayed onset psychotic symptoms and requested a three-month follow-up for the volunteers. “Every interaction—applying for licenses, waiting for licenses, receiving the licenses, applying for contracts for drug manufacture, on and on—involved a delay of up to two months. It was enormously frustrating, and most of it was unnecessary,” says neuropsychopharmacologist David Nutt, the study’s main author. “The study result isn’t the remarkable part—it’s the fact that we did it at all.”

Depression is the “leading cause of disability worldwide,” according to the World Health Organization. Researchers looking for alternative treatments have turned to ketamine and ayahuasca, both of which have shown promise in clinical trials. “It’s worth noting that we have not developed any new treatments which are widely used since the 1970s for depression, despite the fact that this is the major public-health problem in the Western world and middle-income countries,” says Glyn Lewis, who studies psychiatric disorders at University College London. Psilocybin is a promising alternative, Lewis notes, because it appears to take effect after a single dose, whereas some current medications for depression must be taken daily.

“This study is simply asking: is this interesting enough to pursue further as a treatment for depression?” says Lewis. “My own judgment is that yes, it is.”