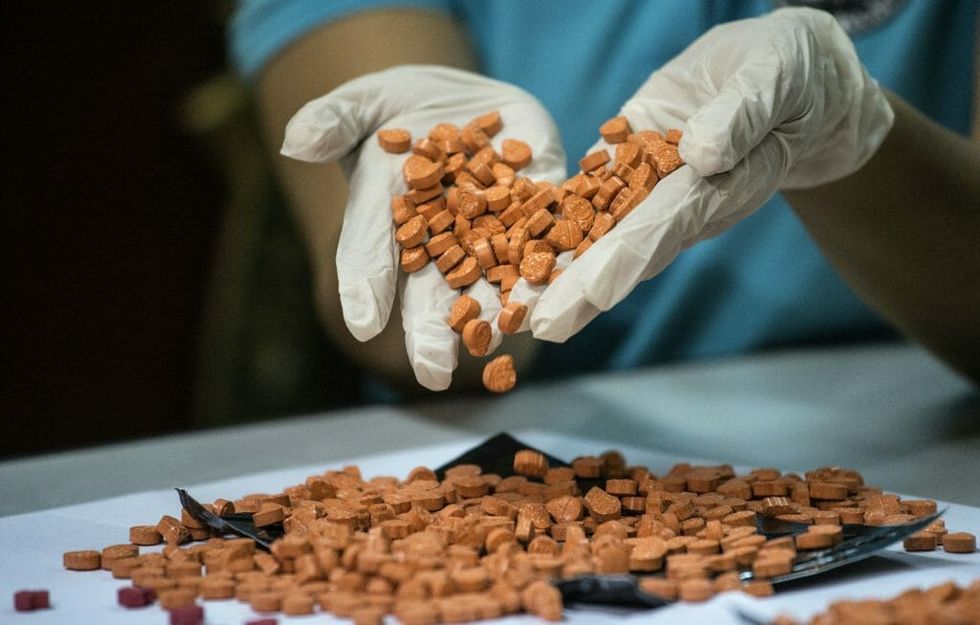 MDMA (3,4 methylenedioxymethamphetamine), the molecule comprising the popular party drug dubbed “Ecstasy,” was cleared by the Food and Drug Administration in August 2017 as a breakthrough therapy for the treatment of Post-Traumatic Stress Disorder.

Breakthrough Therapy Designation was introduced in 2012 as part of the Food and Drug Administration Safety and Innovation Act. “Breakthrough therapy designation is intended to expedite the development and review of drugs for serious or life-threatening conditions,” according to the FDA.Thus, obtaining breakthrough therapy status means MDMA can be used in FDA-approved clinical trials for treating PTSD, the goal of which is the approval of MDMA for pharmaceutical use. A press release by the Multidisciplinary Association for Psychedelic Studies (MAPS), the organization that ran the clinical trials, states, “MDMA-assisted psychotherapy is a novel treatment package that combines psychotherapeutic techniques with three administrations of MDMA as a pharmacological adjunct.”

In MAPS’s phase 2 trial, “61% of patients no longer qualified for PTSD after three sessions of MDMA-assisted psychotherapy two months following treatment.” In addition, according to the 107-participant study, 68% no longer had PTSD in the 12 months following treatment. Participants in phase 2 had suffered from chronic, treatment-resistant PTSD for an average 17.8 years. In fact, MAPS claims an 80 percent success rate for treating PTSD after “years of treatment” with MDMA.

Phase 3 of the MAPS study is scheduled to begin in early 2018, and will include a wider variety of sufferers of PTSD. It will involve 200-300 patients over 18 years of age from the USA, Canada, and Israel. Randomly selected participants will receive either MDMA or a placebo in conjunction with psychotherapy. All participants in the study will undergo “12 associated 90-minute non-drug preparatory and integration sessions.” Upon completion of the study, the results will be assessed and quantified using the Clinician-Administered PTSD Scale (CAPS-5) by a “blinded pool of independent raters.” MAPS’s double-blind phase 3 study is scheduled to conclude in 2021, hopefully garnering FDA approval for MDMA as a prescription treatment for PTSD.

Post-Traumatic Stress Disorder, as defined by the National Institutes of Health, is “a disorder that develops in some people who have experienced a shocking, scary, or dangerous event.” Various traumatic events that can lead to PTSD include the sudden death of a loved one, fighting in a war, life-threatening illness, or any other event that triggers the brain’s flight-or-fight response, such as rape, a natural disaster, or a car accident. PTSD can occur suddenly following a traumatic event, or it can lay dormant and flare up long after the trauma occurs. It is not yet understood why PTSD has so much variability.

PTSD is diagnosed in people who exhibit certain symptoms over a given period time. Traumatic experiences often leave sufferers with feelings of fear, horror, or helplessness. In cases of prolonged trauma, such as chronic illness, brain chemistry can be altered, leading to the development of PTSD. The Sidran Institute outlines the requirements for a PTSD diagnosis. Symptoms of PTSD are grouped into clusters. Clusters are divided into three families; patients reliving the traumatic event, patients avoiding reminders of the event, and patients who are on guard or hyper-vigilant regarding their surroundings. This is known as hyperarousal, and it is common in soldiers returning home from war. Sadly, PTSD causes twenty veterans to commit suicide every day in the United States (suicide is the leading cause of gun deaths in the US).

Each cluster has its own set of specific symptoms. For example, patients may relive the event through nightmares or through an external trigger. Individuals may also suffer from sudden and extreme emotional and physical reactions to seemingly innocuous things, such as a particular sound or smell. People may be withdrawn and avoid social interaction, fearing the recurrence of a traumatic event. People with inflammatory bowel disease, for example, often avoid crowded places or intimate settings, due to the fear of having accidents or not being able to access a bathroom. PTSD can also disrupt sleeping patterns and the ability to concentrate. Prolonged presence of these symptoms for more than one month generally result in a PTSD diagnosis.

MDMA was developed and patented in 1914 by the German pharmaceutical giant Merck. Its development was purposed for therapeutic pharmaceutical use. By the 1970s and 1980s, however, it had become a popular party drug. The MDMA experience, known as ‘rolling,’ causes euphoria, enhanced sensations (particularly to light and sound), and surges of energy.

While its base molecular structure is similar to that of the neurotransmitter serotonin, MDMA is, at its basic level, an amphetamine. MDMA increases production of neurotransmitters such as serotonin (associated with happiness and well-being), dopamine (associated with reward and pleasure), oxytocin (associated with bonding), and norepinephrine (associated with increased arousal and awareness of surroundings). Most users experience euphoria, a desire to bond with others, warmth and decreased anxiety.The effects appear 30-45 minutes after ingestion and usually last 4-6 hours. Some users report an ‘afterglow’ following MDMA use, which can include feelings of calm, peace and a positive self-image. Low doses of MDMA in supervised, clinical settings, show the increases of positive feelings and elimination of anxiety and fear allow patients to address and conquer the causes and often debilitating symptoms of PTSD.

MDMA can also result in side effects such as dehydration, feelings of depression from serotonin depletion and exhaustion. These “comedown” effects are, for the most part, not serious and will self-correct within a few days after use. In rare cases, overexertion and dehydration can lead to death, but these instances are very uncommon, making MDMA one of the “least risky” recreational drugs. Deaths have occurred from taking Ecstasy, however, mainly due to overexertion, dehydration, hypernatremia (drinking too much water), or unidentified additives in pressed Ecstasy pills (MDMA cannot be pressed into a pill on its own). Loose MDMA, or “Molly,” is sold as brown or white powder or rocks.

Recreational users should always test their MDMA using a Marquis test kit, which contains a reagent that turns purple to black in the presence of MDMA. Test kits can be purchased online, and forums such as Erowid, DanceSafe, and Bluelight offer safety tips on MDMA use. Ecstasy data contains a large catalog of test results on pressed pills that users can access for free. Despite its schedule I status, people will continue to use MDMA recreationally, as they have for nearly forty years. Although its new status as a breakthrough therapy is promising, MDMA remains illegal for recreational use. Therefore, promoting safety remains paramount.

MDMA is not the only psychedelic being researched for treating mental illness, however. MAPS recently completed a double-blind study of LSD, better known as “acid,” to treat anxiety, depression, and alcoholism. Psilocybin, the active ingredient in magic mushrooms, showed an 80 percent success rate in treating anxiety and depression in cancer patients, in a study involving 29 patients at New York University and 51 patients at Johns Hopkins University. LSD and psilocybin are classified as Schedule I drugs by the DEA, which means they have “no currently accepted medical use and a high potential for abuse,” according to the DEA.

Despite having no life-threatening or serious side effects when clinically administered, and its new status as a breakthrough therapy, MDMA is still listed as a schedule I drug. Other substances classified by the DEA as a Schedule I include heroin and marijuana (despite numerous studies showing the plant’s medicinal benefits—29 stateshavelegalizedmarijuanaformedicaluse—and having been legalized for recreational use in eight states and the District of Columbia). Ironically, highly addictive drugs like cocaine and methamphetamine are listed as schedule II drugs, meaning the DEA considers them to be less dangerous than MDMA and marijuana (marijuana has never caused a documented overdose, nor has it been proven to be addictive). Although mainstream research into the therapeutic benefits of MDMA and other psychedelics is still in its infancy, the promise these substances show offers hope to millions of people frustrated by more conventional therapies.