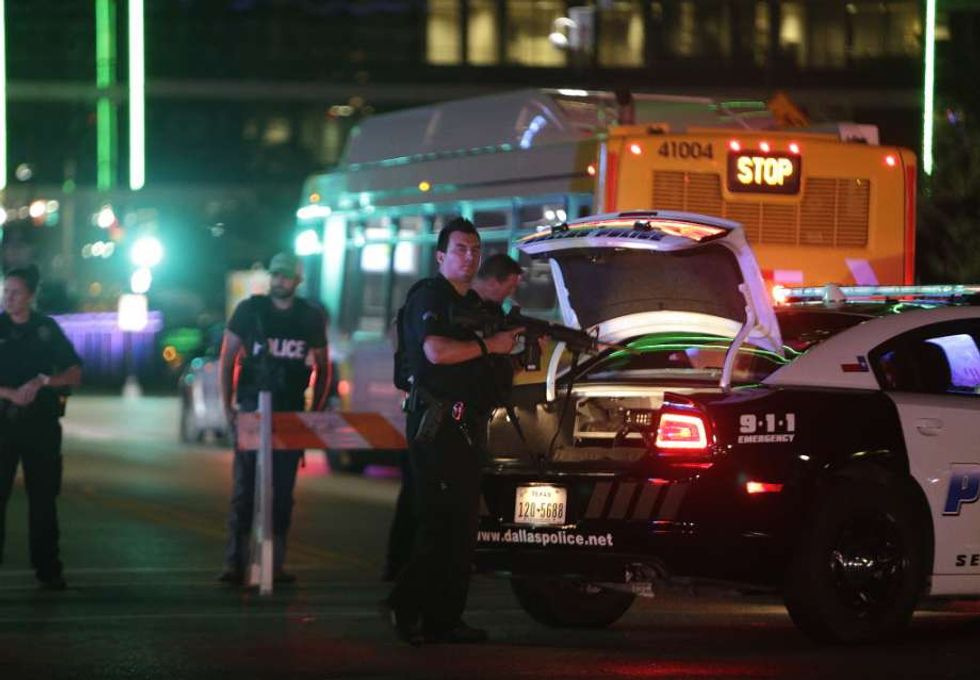 Two fatal police shootings in Louisiana and Minnesota sparked protests around the country this week. All of these protests were peaceful demonstrations, except for Dallas where things quickly turned violent after shots rang out.

Those present immediately took to Facebook and Twitter to record the events. Videos and live streams of police brutality against blacks have become more commonplace as technology has enabled everyone with a phone to capture events live. The films often become key pieces of evidence in subsequent trials. In this case, they may become crucial to reconstructing the shootings in events in Dallas. Demonstrators began sharing images and videos around 9 PM CT.

A video posted at 9:02 shows a peaceful protest turned deadly in a matter of seconds.

An hour later, a woman posted a video taken of the downtown Dallas area. Shots can be heard as she and others from their vantage point watch law enforcement hurry toward the scene. A man at the scene reports in a Facebook live video as officers take cover to avoid gunfire.

Social media is proving an important tool for law enforcement. Soon after the shootings, the Dallas Police Department went on  social media to try to identify a suspect, tweeting images and information to the public.

Officials believe the police officers were the victims of snipers. Three suspects are currently in custody. A fourth suspect exchanged gunfire with authorities in a parking garage until early morning. Dallas Mayor Mike Rawlings confirmed the fourth suspect had died early Friday. “We don't exactly know the last moments of his death but explosives did blast him out," Rawlings said. None of the suspects have been identified. Authorities said it looked like the gunmen planned the attack in advance, but the motivation behind the violence is still unclear. The attack marked the deadliest day for law enforcement since September 11, 2001.

The shooting began around 8:45 Thursday as hundreds of protesters gathered. Witnesses described a chaotic scene. "I saw all the cops were bending over. There had to have been five or six cops,

and they were all getting shot down. It was right after the rally, we were walking to the car," said Cortney Washington, a Dallas resident.  At least two civilians were shot during the attack. Family members identified Shetamia Taylor, who was shot while attempting to shield her children from gunfire. Taylor underwent surgery early Friday after being shot in the right calf. City of Dallas spokeswoman Sana Syed confirmed a male victim was also shot, but did not release his identity or condition.

President Obama released a statement on the shootings, speaking from Warsaw, Poland, where he was meeting with leaders of the European Union and attending a NATO summit. "There is no possible justification for these kinds of attacks or any violence against law enforcement," he said. “Anyone involved in the senseless murders will be held fully accountable. Justice will be done… Today is a wrenching reminder of the sacrifices they [law enforcement] make for us. We also know when people are armed with powerful weapons, unfortunately, it makes attacks like these more deadly and more tragic."

The violent events come after two highly publicized incidents in which black men were killed by police officers, both of which were also captured live on video.

On Tuesday, Alton Sterling, of Baton Rouge, Louisiana, was shot and killed during an altercation with two police officers. The officers responded to a call about a man threatening people with a gun outside a convenience store. Video footage from eyewitnesses shows police ordering Sterling to get on the ground before tackling him and pinning him down. Sterling was shot several times and killed.

The following day, Philando Castile was shot and killed by an officer during a traffic stop outside Minneapolis, Minnesota while his fiance and 4-year old daughter sat in the car. The shooting made headlines after Castille’s fiance, Diamond Reynolds, livestreamed the bloody aftermath on Facebook. According to Reynolds, Castille told the officer he had a firearm he was licensed to carry. The officer shot him as he reached into his pocket for his wallet and identification.

The issues are certain to shift the conversation during an already heated presidential election which has highlighted gun violence and inequity within the criminal justice reform as crucial issues.