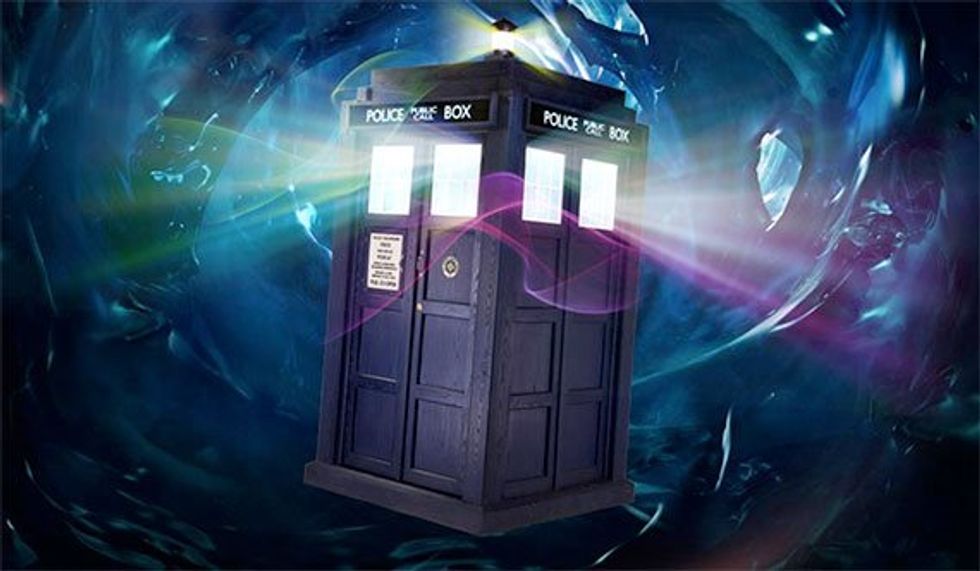 Humans have always been fascinated by time travel. Physicists have been trying to prove time travel possible for years, if only theoretically. Now, physicist Ben Tippett of the University of British Columbia, Canada, and astrophysicist David Tsang of the University of Maryland have come up with a model for a time machine that Tippett says is “mathematically possible.” They’ve nicknamed the model a Traversable Acausal Retrograde Domain in Space-time, or TARDIS, as a nod to the time-traveling sci-fi hero, Dr. Who. The results are published in Classical and Quantum Gravity.

In order to understand how such a machine would work, here’s a brief refresher on Einstein’s Theory of General Relativity. Einstein posited that the three spatial dimensions we are most familiar with—left-right, up-down and forward-backward—cannot be separated from the fourth dimension of time. In essence, they comprise a four-dimensional surface, “across which the stars and planets and all the rest of the matter in the universe tumble,” write Tippet and Tsang in a paper titled “The Blue Box White Paper,” when they first started contemplating their time machine. In addition, another key law of physics, known as Classical Energy Conditions requires two conditions: matter must be gravitationally attractive, and can never move faster than the speed of light. Any matter that defies either of those criteria is considered “exotic” or “unphysical.” So far, no such exotic matter has ever been discovered, but more on that later. In our understanding of the universe through Einstein’s theory, the planets and stars might appear to move through space in straight lines; however, when they come close to each other, space-time curves, bending the trajectories of these nearby planets and stars into ellipses.

“Gravity gets taught to you as being a force, an invisible rope between the earth and the sun, and the reason the earth goes around the sun is because the sun is pulling on it,” Tippett tells Second Nexus. However, it’s more nuanced than that—it’s actually the curvature in the space-time around the sun (or any planet), which pulls or bends other planets in curves rather than straight lines. So while it’s generally true that nothing can move faster than the speed of light, there may be some exceptions, Tippett says. “If space-time curvature gets involved, you might calculate that a planet is moving faster than the speed of light.” He compares this to a person standing on the ground watching a person on a bicycle ride away from them. “We’re used to distances being static, not changing. Since the distance between you and the bicycle is increasing, you’ll see the bicyclist as moving away from you.” But in Einstein’s theory, you could have a bicycle that moves, you move, and the distance between you can also move. “When the distance between you is evolving, we call that curvature.”

Another way to think of gravity and curvature in relation to space-time, he says, is to think of a skateboarding park. In general, trying to turn on a skateboard is not so easy. However, inside a skate park, “You’ll see the kids turning quite quickly.” Why is that? “They’re interacting with the curvature of the skate park—rounded bowls and hills—and banking off the curvature to turn. That’s essentially what’s happening in Einstein’s theory.”

This concept that distances can be “dynamic and evolving,” according to Einstein is the kind of math physicists use to explain the expansion of the universe, in which they find that the farther away a galaxy is, the faster it appears to be moving away. “If there’s enough space-time curvature around you, there’s no limit to how fast an object might move relative to you,” he says.

Now, enter the theoretical time machine, which he envisions as a box, inside which a person would sit. Ever the fan of analogies, he explains the movement of the box in space-time using the idea of a film. A reel of film essentially captures a photographic image of something in a continuous path, say a ball being thrown through the air, at time intervals of something like one image every one-quarter of a second continuously. If you take this reel of film of a ball flying through the air out of the camera, you have a line of images. If you were to cut these images out and stack them so that the top of the pile is the first frame in the movie and the back of the pile is the last frame, you’d get a two-dimensional plane in space (front-to-back of the pile), and the third dimension—the trajectory of that ball—would be time.

“My time machine exists in space-time,” he says, which is curved, not straight. If you took a video of this thing at any time there would always be two time machines. But if you took your video and stacked it up in your space-time diagram, and highlighted where the object was and connected it through like a thread, you’d see there aren’t really two boxes—it’s one box that goes in a circle through your space-time diagram.”

In essence, his time machine uses the curvature of space-time to bend time in a circle, which takes the person in the machine back in time, and eventually returns him to the present from which he originally left.

The person inside the box, he says, would notice some essential feeling of acceleration, but if they looked down at the hands of a watch the entire journey, “nothing would seem to be amiss,” Tippet says. “It’s when you look outside the box that you’d see really weird things.” If you could see a clock tower outside the box, “It would slow to a stop, and when you’re going backwards inside the box, you’d see the hands of the clock turning counterclockwise, backwards, and then eventually clockwise again.”

Or, to get even more visual, if inside the box you were cooking breakfast, then at one point in the journey you’d look out the window and see a second version of yourself, a mirror version, moving backward in time. “You’d see your doppelgänger take a fried egg out of a pan and put it back in the egg, and the cream coming back out of the coffee.”

But here’s the kicker: in order to make such a time machine, they’d need some of those exotic materials mentioned before. “Normal gravitational space-time curvature usually forces objects to get closer together. What we require [for the time machine] is that things skew apart, get further apart, which requires a certain type of matter we’ve never seen,” he says.

There have been some rumbles of possibility through the physics community that as-of-yet undiscovered materials could be responsible for the continued expansion of the universe, or that dark matter or dark energy. All that we can see in the universe, including Earth, the sun, other stars and galaxies—are comprised of ordinary matter, known as “baryonic” matter—just regular protons, neutrons and electrons merged together into atoms. One of the more shocking discoveries physicists made is that this baryonic matter makes up less than 5 percent of the universe’s mass. “The rest of the universe appears to be made of a mysterious, invisible substance called dark matter (25 percent) and a force that repels gravity known as dark energy (70 percent),” according to National Geographic.

While scientists have not actually observed dark matter itself, since it appears invisible to light or electronic radiation, and doesn’t interact with baryonic matter, it does appear to have a gravitational impact on galaxies, giving them confidence that it exists. Dark energy is an even bigger conundrum for scientists. Discovered in the 1990s, physicists believe it is responsible for the way the universe is accelerating as it continues to expand, and they think it’s even growing stronger. However, Tippett is not convinced it would be capable of powering a time machine. “My money is that dark energy is too boring to be used to travel through time,” he says.

So why undertake this theoretical exercise if there’s no hope of finding the materials to actually build a time machine? “It’s a good teaching exercise,” he says. He explains that there’s a tradition in his field of “generating mathematical models for things you might not expect to see”—a tradition that Einstein and his good friend Kurt Goedel, an Austrian mathematician and philosopher, engaged in quite often. “It demonstrates the power of the inquisitive nature of science. Essentially I’m just joining the tradition of people in my field saying here’s a fun space-time puzzle, teach it to your grad students.”

On a more serious note, he considers that perhaps it’s his way of deepening his own understanding of things. “Scientists are people who all belong to a different discipline, and we’re just using our discipline to understand the world.”