If You Are Diabetic, A New Kind of Tattoo Could Save Your Life 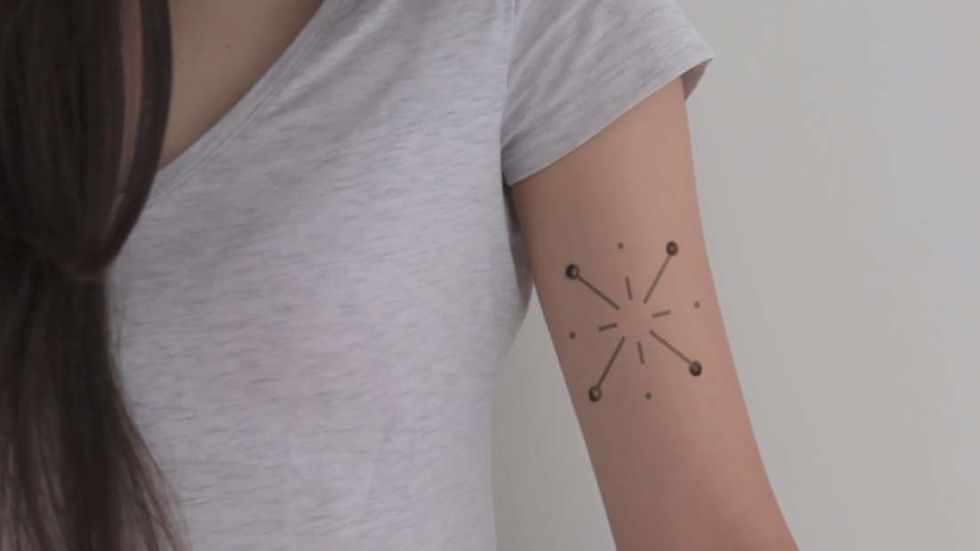 A new tattoo could give people with diabetes a fast, easy way to monitor their blood sugar levels. Currently, diabetics need to have a constant read on their blood sugar status, which they get either by testing their blood several times a day with a pin-prick test or by receiving electronic notifications sent from a device implanted under their skin. Now, researchers at the Massachusetts Institute of Technology (MIT) and Harvard University have devised a unique biosensing tattoo that changes colors to indicate fluctuations in blood sugar levels.

DermalAbyss ink monitors interstitial fluid to track pH levels, sodium, and glucose concentrations within the bloodstream. When blood sugar goes up, the glucose sensing ink changes from blue to brown. Too much sodium and it becomes green. Purples and pinks indicate a changing pH level. This non-invasive, interactive display lets people know when they need to add insulin. A video demonstrates how it would work.

DermalAbyss: Possibilities of Biosensors as a Tattooed Interface from Fluid Interfaces on Vimeo.

The biosensing tattoo is still in the "proof-of-concept" stage and has only been tested on pigs, whose skin is very similar to that of humans. It has yet to be tested on living skin, and it is unknown how accurate and durable it would be, or how it would react on the skin of people with allergies.

"It will take a long time for anything practical to go to market, but it [the technology] evokes imaginations and opens up possibilities," said  MIT Media Lab researcher Xin Liu.

Another option in development is a special “smart patch” devised by researchers with the UNC-N.C. State Biomedical Engineering Program. This insulin-responsive patch not only measures insulin levels, it instantly releases insulin into the bloodstream as needed. Roughly the same size as a dime, the patch contains 121 microneedles, each thinner than a human hair and pre-loaded with tiny packets of insulin. The researchers have created a company, Zenomics Inc., to develop the product, receiving a $5.8 million investment from Chinese company MicroPort Scientific.

“If you’re a very strict, Type A person who is on an extreme schedule, basically always eats the same thing, has the same activity, and you’re really good at math and nutrition, then you might not need this patch,” says Susan Spratt, associate professor of medicine at Duke University. “But no one is perfect.”

The increasing prevalence of diabetes is inspiring this new burst of medical innovation. 29.1 million Americans, or 9.3% of the population, have diabetes. 1.4 million Americans are diagnosed with diabetes every year. The disease is the 7th leading cause of death in the United States. More than 20 percent of all health care spending is for people with diabetes.

Treatments, including these products, help people with both Type 1 and Type 2 diabetes. Type 1, also known as juvenile diabetes, is an autoimmune disorder in which a person’s pancreas stops producing insulin, the hormone that enables the body to obtain energy from food. It is typically diagnosed in people during childhood. Type 2, known as adult-onset diabetes, is caused by a number of factors, including genetics, age, metabolic syndrome, excess weight, smoking, and toxins in the environment, including air pollution.