Here's Why Its Critics Hate Trumpcare 2.0 So Much 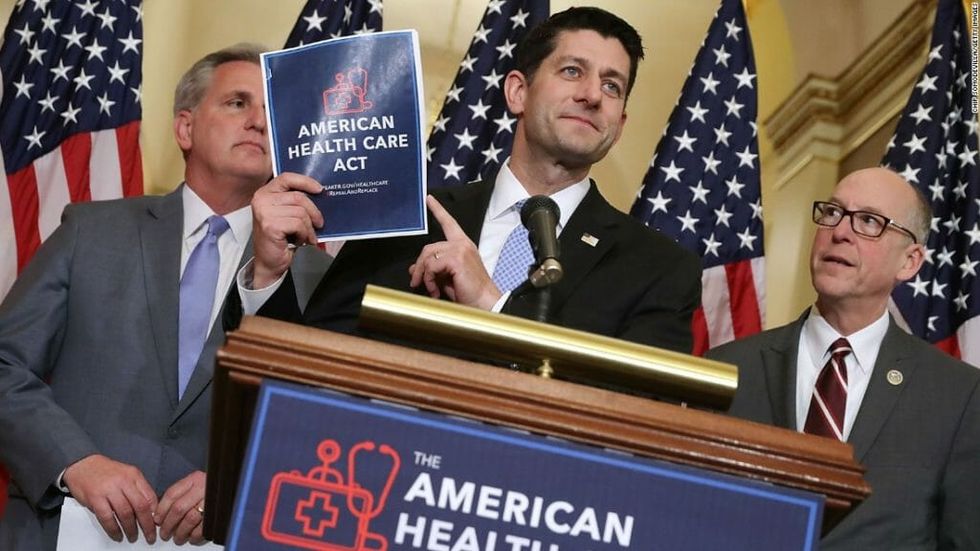 After weeks of stops and starts, Republicans appear poised to hold a vote today on the latest version of repeal and replacement of the Affordable Care Act. House Speaker Paul Ryan has insisted that a vote would not take place unless they had the votes lined up to pass the measure. But even as a vote, and presumably passage, draw near, criticism of the bill is coming from all corners.

One major complaint critics of the bill have is that, despite the promises of the President, it doesn't guarantee coverage for those with pre-existing conditions. President Trump famously said on Sunday, that "Pre-existing conditions are in the bill. And I mandate it," yet that doesn't appear to be the case.

The American Health Care Act allows states to waive the rule prohibiting insurance companies from charging sick people more for insurance, as long as those states provide high risk pools for those patients. But many say there simply isn't enough money in the bill to make these high risk pools affordable for those with pre-existing conditions. To alleviate this concern, Rep. Fred Upton introduced an amendment that would provide $8 billion over 5 years to states that want to set up these pools. This amendment helped swing wavering moderate Republicans into the Yes column, but many say $8 billion would not be nearly enough to plug this hole.

The Center For American Progress estimates that these high risk pools would be underfunded by as much as $20 billion a year and would result in exorbitant premium increases for those with pre-existing conditions. For example, a 40 year old patient with metastatic cancer would be on the hook for a premium surcharge of $140,510.

Here's how much more people with pre-existing conditions could pay under the GOP HC bill up for vote today. My… https://t.co/GboZf19NYC
— Steven Rattner (@Steven Rattner) 1493900899.0

The American Medical Association, in its statement opposing the legislation, said: “Not only would the AHCA eliminate health insurance coverage for millions of Americans, the legislation would, in many cases, eliminate the ban against charging those with underlying medical conditions vastly more for their coverage...America should not go backward to the time when our fellow citizens with pre-existing health conditions faced high costs for limited coverage, if they were able to obtain coverage at all.”

Another concern critics have is that it would undermine Medicaid, and harm some of the most vulnerable among us, including special needs kids. Not only would the new bill cut Medicaid by $880 billion (or 25%) over 10 years, but it would no longer consider public schools Medicaid providers. This would remove crucial funding that helps care for disabled children at school every day.

In its statement opposing the new bill, the Save Medicaid in Schools Coalition said “Medicaid is a cost-effective and efficient provider of essential health care services for children. School-based Medicaid programs serve as a lifeline to children who often can’t access critical health care and health services outside of their schools."

Despite all the tweaks to the legislation, the new bill would still result in at least 24 million Americans losing health care coverage even as it provides a massive tax break for the wealthy of about $1 trillion over 10 years.

"no hearings, no studies, no CBO analysis, not even text of a bill circulated the day b4 vote" https://t.co/W7E4iavxWc via @intelligencer
— Ronald Brownstein (@Ronald Brownstein) 1493868983.0

Add to that the procedural issues, such as the fact that there have been no public hearings on this legislation, there is no final text for the public to read, and there will be no score by the Congressional Budget Office until after the House votes on the bill, there appears to be plenty for everyone to dislike in this bill, particularly Democrats.

As Nancy Pelosi put it in a statement yesterday, "Forcing a vote without a CBO score shows that Republicans are terrified of the public learning the full consequences of their plan to push Americans with pre-existing conditions into the cold. But tomorrow, House Republicans are going to tattoo this moral monstrosity to their foreheads, and the American people will hold them accountable."