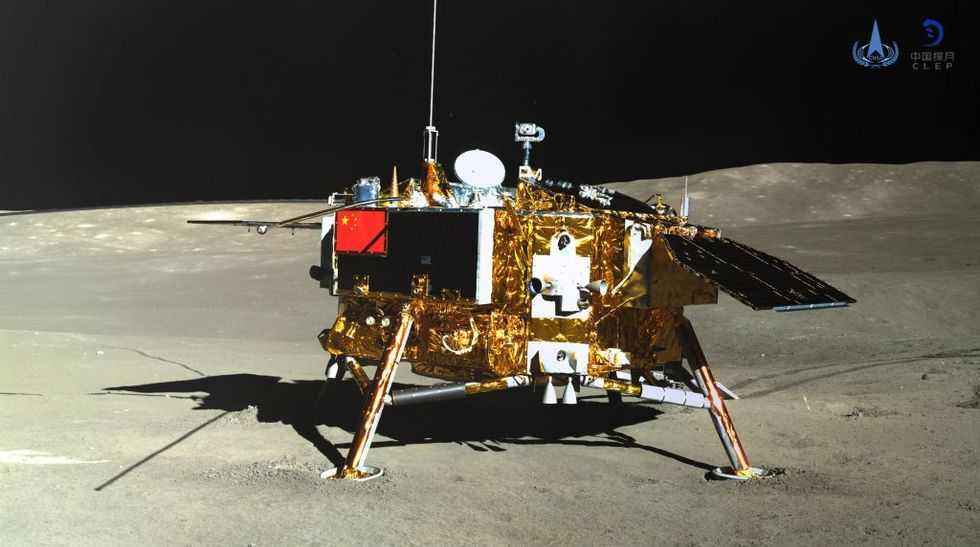 This picture released on January 11, 2019 by the China National Space Administration (CNSA) via CNS shows the Chang'e-4 lunar probe, taken by the Yutu-2 moon rover, on the far side of the moon. - China will seek to establish an international lunar base one day, possibly using 3D printing technology to build facilities, the Chinese space agency said on January 14, weeks after landing the rover on the moon's far side. The agency said four more lunar missions are planned, confirming the launch of a probe by the end of the year to bring back samples from the moon. (Photo by - / China National Space Administration (CNSA) via CNS / AFP) / China OUT (Photo credit should read -/AFP/Getty Images)

Chang’e-4, the Chinese vehicle that made waves recently for making the first soft landing on the far side of the moon, isn't done mystifying those of us down here on Earth.

In addition to a lander and rover, Chang’e-4 also features a six pound canister filled with a variety of seeds—like that of cotton and potatoes—along with fruit fly eggs and yeast. The intention is to create a miniature ecosystem that could provide more information to scientists on the feasibility of sustaining life on a planet outside of our biological origin.

Now, Chang’e-4 has achieved a first for the second time: The cotton seeds in the canister have begun to sprout, making these plants the first to be grown on a planetary body other than Earth.

People all over the planet were amazed.

@PDChina Great feat!! I trust the Chinese to break many records in the next decade. Well done to the team that has organized this mission.
— Deinabo Horsfall (@Deinabo Horsfall) 1547534795.0

The remarkable achievement got many thinking about the implications as well.

As they looked to the stars, Twitter users began speculating on the future.

Naturally, there were questions.

But as Chang'e-4 has demonstrated, there are plenty of scientists ready to find the answers.