This Settlement In Canada Is Three Times Older Than The pyramids

Archaeologists have confirmed that humans inhabited an island off Canada’s BC coastline during the Ice Age — just like native people have been claiming for 14,000 years. 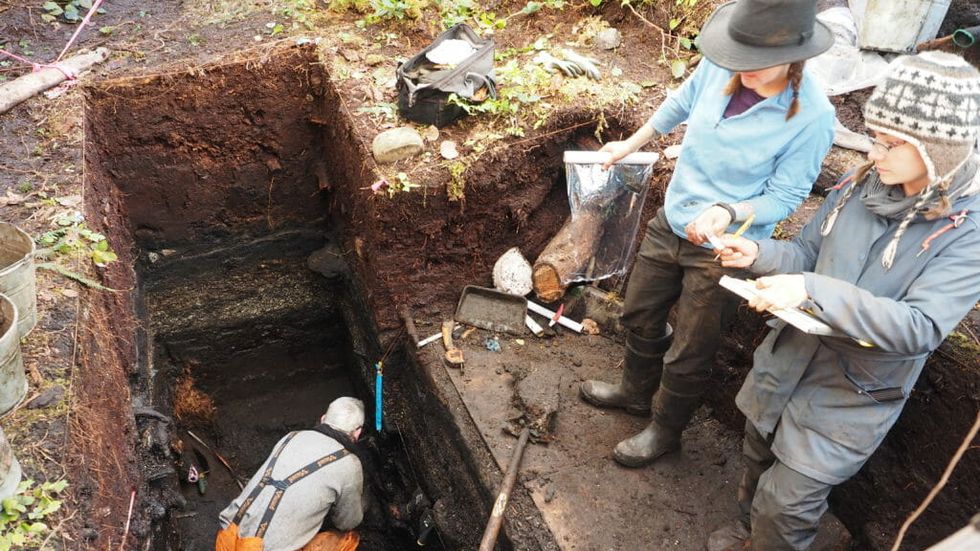 Here’s to the power of oral tradition: Canada’s indigenous Heiltsuk people have long told the story of how their ancestors sheltered on a strip of coastline that remained free of glaciers during the Ice Age — 14,000 years ago. Now science confirms the story.

Archaeologists have uncovered an ancient settlement on Triquet Island, off the central coast of British Columbia. At a time when glaciers covered much of North America, the Heiltsuk gathered on this unfrozen island to wait out a few thousand years of winter. Carved wooden and stone tools, a cooking hearth, and other artifacts from the site have been carbon dated to the Ice Age, proving that the amazing story the Heiltsuk people told around the fire for many millennia is based in fact.

"This find is very important because it reaffirms a lot of the history that our people have been talking about for thousands of years," said William Housty, a member of Heiltsuk Nation.

The artifacts were preserved under deep layers of soil and peat, and represent one of the oldest verified sites of human occupation in North America. The settlement is older than the Roman Empire, and expands our understanding of human activities and history in Canada. Non-local stone tools and other evidence at the site suggested that humans originally traveled to the region by boat.

“It is apparent that they were rather adept sea mammal hunters,” said archaeologist Alisha Gauvreau, a PhD student from the University of Victoria and a scholar with the Hakai Institute. “The material that we have recovered from that trench has really helped us weave a narrative for the occupation of this site. It appears we had people sitting in one area making stone tools beside evidence of a fire pit, what we are calling a bean-shaped hearth.”

Evidence at the site suggests that the Heiltsuk diet centered on sea mammals, especially sea lions and seals. However, 5,700 years ago, their diet shifted to fin fish. A major tsunami

occurred around the same time, one of two that struck the island during the Heiltsuk’s residency. Shellfish was part of the diet all along, and the coastline has been altered to facilitate fish trapping and cultivation of clam beds.

Artifacts from Triquet Island are being handled by the Royal B.C. Museum.

The archaeological find expands our understanding of the lifestyle of early residents of the area. It also gives today’s Heiltsuk people additional evidence to support their claims of early residency, which could prove useful in ongoing efforts to protect their land and resources from newcomers.

Housty, who sits on the board of directors for the Heiltsuk Resource Management Department, says the scientific validation will help future negotiations over land title and rights.

The Heiltsuk is currently at odds with Canadian authorities over the handling of a fuel spill in their territory. On October 13, 2016, the Nathan E. Stewart, a tug transporting fuel for the Kirby Corporation, sank in BC’s Gale Passage. A report by the Heiltsuk Nation Tribal Council says that the response and cleanup effort was “wholly inadequate” and the Heiltsuk never gave permission for the transport of oil through their territory and fishing grounds.

"When we do go into negotiations, our oral history is what we go to the table with. So now we don't just have oral history, we have this archaeological information. It's not just an arbitrary thing that anyone's making up,” said Housty. “We have a history supported from Western science and archaeology."