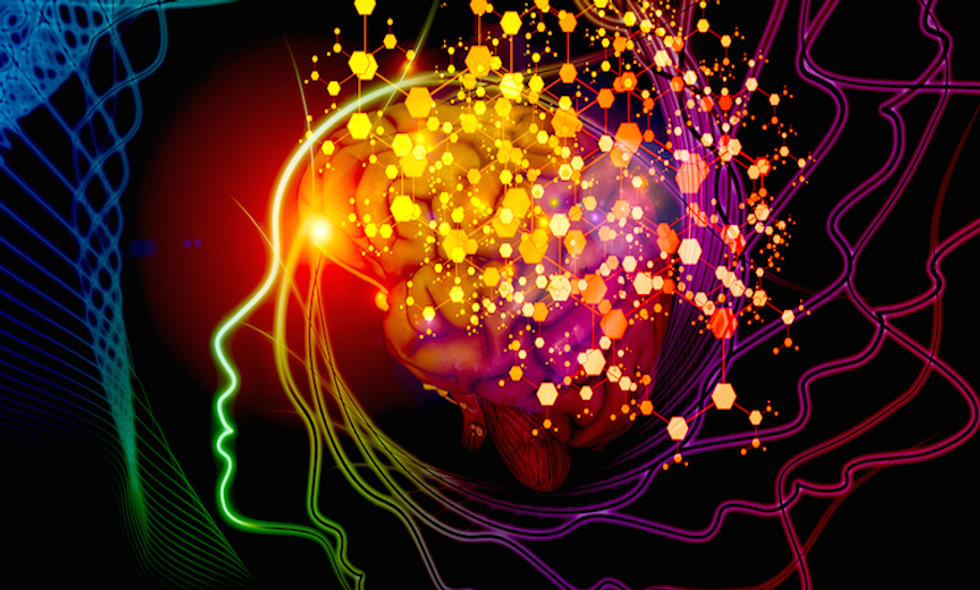 New research suggests that LSD (Lysergic acid diethylamide) frees the brain from constraints to be less compartmentalized and more like the mind of an infant. The brain, say researchers at Imperial College, London, works on independent networks and each network performs separate functions, such as vision and hearing. LSD breaks down the separateness of these networks, unifying them. Researchers also found that those who experience drug-induced hallucinations can "see" with other parts of the brain, not only the visual cortex. The scientists believe these results provide insight into the spiritual or religious sensations people often report while under the influence of the drug, and the after-effects on a person's well being may continue to affect them long after the initial effects of LSD have worn off.

Researchers also found that those who experience drug-induced hallucinations can "see" with other parts of the brain, not only the visual cortex. The scientists believe these results provide insight into the spiritual or religious sensations people often report while under the influence of the drug, and the after-effects on a person's well-being may continue to affect them long after the initial effects of LSD have worn off.

20 psychologically and physically healthy volunteers took part in the study. Each of these volunteers both LSD and a placebo. All volunteers confirmed that they had previously taken some type of psychedelic drug. During controlled and supervised experiments, each volunteer received an injection of 75 micrograms of LSD or the placebo. Scientists then issued brain scans, using various techniques, such as functional magnetic resonance imaging (fMRI) and magnetoencephalography (MEG). These techniques allowed researchers to study activity in the brain, including, but not limited to, monitoring blood flow and electrical activity.

Robin Carhart-Harris led the research. He is the first scientist in 40 years to study the effect of LSD on humans. "Our results suggest that this effect underlies the profound altered state of consciousness that people often describe during an LSD experience,” he said. “It is also related to what people sometimes call 'ego-dissolution', which means the normal sense of self is broken down and replaced by a sense of reconnection with themselves, others and the natural world.” That the brain becomes less constrained under the influence of the drug, resembling infancy, is logical, he says. “This also makes sense when we consider the hyper-emotional and imaginative nature of an infant's mind."

The study, published in the journal European Neuropsychopharmacology, also found that the visual cortex in those who listened to music while under the influence of LSD received

information from the part of the brain that typically deals with memory and mental imagery. The more information the visual cortex received, the more the subjects reported experiencing visions of themselves from earlier in life.

Professor David Nutt, the director of neuropsychopharmacology at Imperial College, believes these results could significantly improve quality of life for those suffering from acute mental disorders. "For the first time we can really see what's happening in the brain during the psychedelic state, and can better understand why LSD had such a profound impact on self-awareness in users and on music and art. This could have great implications for psychiatry, and helping patients overcome conditions such as depression," he said. The mysteries behind such thought patterns as depression and addiction may hopefully be unveiled.

Professor Nutt once served as the chairman of theAdvisory Council on the Misuse of Drugs (ACMD). He was fired in 2009 after claiming that drugs such as ecstasy and LSD are less harmful than alcohol or tobacco. These new finds could provide similar controversy. "We are finally unveiling the brain mechanisms underlying the potential of LSD, not only to heal, but also to deepen our understanding of consciousness itself,” said Amanda Feilding, director of the Beckley Foundation, a charity that worked with the researchers on the study and advocates for evidence-based drug policy.

According to Robin Carhart-Harris, there is only one other group of scientists in the world currently studying the effects of LSD in humans. These scientists are based at the University of Zurich, led by Dr. Franz Vollenweider. “They appear to be focusing on using antagonists [which block LSD and its effects] to clarify the pharmacological targets of LSD. They have done their own fMRI scans, but taken during psychological tasks, rather than when the brain is at rest, as we did. Their results haven’t been published yet, so I can’t comment on their findings,” he said.

Carhart-Harris revealed that separate experiments to test the effects of LSD on creativity and how LSD mimics the dream state are in the works. There are exciting findings in the study of psilocybin, or “magic mushrooms,” as well. “More importantly, we have already completed a trial on psilocybin as a therapy for treatment-resistant depression funded by the UK's Medical Research Council: not as a daily drug, but in targeted psychotherapeutic sessions. Results will be presented next month. The basic argument for this is that we know that the default mode network is overactive in people who are depressed, and we know from our earlier study that psilocybin reduces how integrated that network is — at least during the ‘trip’ itself.”

Even more promising: “Our latest brain imaging study suggests that LSD has similar effects—suggesting that it could be trialled therapeutically too.”