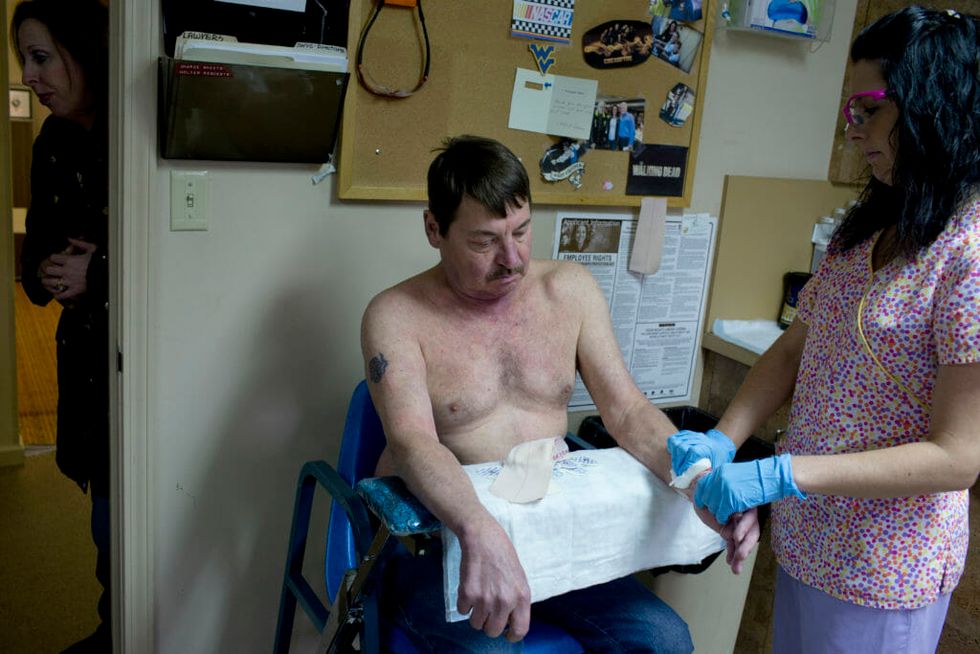 Remember when coal was king and miners died slow, horrifying deaths from black lung disease? Well, guess what. Not only are taxpayers—thanks to Donald Trump and a few coal billionaires—propping up the inefficient and planet-killing coal industry with renewed vigor, it turns out black lung never went away, either.

"There's a great deal of evidence ... that definitively demonstrates that we are in the midst of an epidemic of black lung disease in central Appalachia."

MORGANTOWN, WV - MARCH 01: Student protesters demonstrate against Republican candidate for U.S. Senate Don Blankenship as he speaks at a town hall meeting at West Virginia University on March 1, 2018 in Morgantown, West Virginia. Blankenship is the former chief executive of the Massey Energy Company where an explosion in the Upper Big Branch coal mine killed 29 men in 2010. Blankenship, a controversial candidate in central Appalachia coal country, served a one-year sentence for conspiracy to violate mine safety laws and has continued to blame the government for the accident despite investigators findings. (Photo by Spencer Platt/Getty Images)

"This is the largest cluster of progressive massive fibrosis ever reported in the scientific literature," says Scott Laney, a NIOSH epidemiologist involved in the study. "We've gone from having nearly eradicated PMF in the mid-1990s to the highest concentration of cases that anyone has ever seen."

Three clinics operated by Stone Mountain Health Services that treat coal miners mostly from Virginia, Kentucky and West Virginia have recorded unusual numbers of cases in recent years. In a typical year in the 1990s, a clinic might see five to seven cases of black lung a year. Now it sees that many every two weeks and more than 150 cases per year. Researchers believe that this number does not even include all the cases in the area, as people typically do not seek treatment until their condition is advanced or until they stop working and have time to visit a clinic.

Younger miners are suffering the most.

Another alarming trend: Miners are affected at younger ages than in the ’90s. Today’s miners may fall sick in their 50s, 40s and even 30s after fewer years of mining coal. The NPR investigation found that the miners worked longer hours and worked on thinner coal seams. The mining process for these areas requires mining machines to cut rock to access the coal, a process that creates silica dust, which is far more dangerous than coal dust.

PMF, or complicated black lung, is caused by inhalation of coal and silica dust at coal mining operations. Miners gradually lose the ability to breathe, wheeze and gasp for air, and eventually suffocate to death. The only treatment is a lung transplant, for which most miners are ineligible, as they are diagnosed too late to qualify.

"A high proportion" of the miners in the NIOSH study had severely advanced disease and "coal mining tenure of less than 20 years, which are indications of exceptionally severe and rapidly progressive disease," said the study published in the Journal of the American Medical Association. More than 50,000 people are still working in the US, and it is expected that many coal employees have complicated black lung that has not yet been diagnosed.

"There's a great deal of evidence ... that definitively demonstrates that we are in the midst of an epidemic of black lung disease in central Appalachia," Laney said. "We're at the epicenter of one of the largest industrial medicine disasters that the United States has ever seen."

MORGANTOWN, WV - MARCH 01: Student protesters demonstrate against Republican candidate for U.S. Senate Don Blankenship as he speaks at a town hall meeting at West Virginia University on March 1, 2018 in Morgantown, West Virginia. Blankenship is the former chief executive of the Massey Energy Company where an explosion in the Upper Big Branch coal mine killed 29 men in 2010. Blankenship, a controversial candidate in central Appalachia coal country, served a one-year sentence for conspiracy to violate mine safety laws and has continued to blame the government for the accident despite investigators findings. (Photo by Spencer Platt/Getty Images)

During his January 2018 State of the Union address, President Trump announced that his administration has “ended the war on beautiful, clean coal.” One of his first acts as president was to undo an Obama-era rule restricting the dumping of toxic coal mining debris into streams. A year later he is considering a plan to compensate coal companies for the downturn in business they have experienced as natural gas becomes the dominant source of energy in the US.

Coal has been on the decline for years, and it's not showing signs of slowing down.

Coal was once the largest source of energy in the US, but now has fallen to second place, with 30.4 percent of the market, while natural gas is the new leader at 33.8 percent. The Trump administration recently advanced a plan to pay coal operators more for their power, but that was rejected as a violation of US law. Coal mogul Bob Murray, who owns FirstEnergy Solutions, has now asked the government to compensate him for to offset losses as his industry loses market share, a highly unusual request in a capitalist market environment.

US coal production has been impacted by the rise of natural gas, a cleaner-burning, less expensive fuel. Coal advocates have targeted environmental regulations instead, however. Environmentalists have been critical of the coal industry’s ecological impacts. Coal mining, which involves the full-scale removal of mountaintops, has destroyed more than 500 mountains in Appalachia alone, and reduced more than one million acres of once-forested, mountainous land to toxic rubble. The toxins exposed during mining include sulfate and selenium, which have contaminated waterways in the region and beyond. In addition, more than 2,000 miles of streams have been buried in coal rubble, affecting vital waterways throughout Appalachia. Coal is also a leading contributor to airborne pollution and climate change. Countries like China, Poland and India have experienced dramatic increases in smog as their use of coal grows.

Trump's pick to be second-in-command of the EPA is a coal lobbyist and climate change denier.

A top coal lobbyist and climate change skeptic, Andrew R. Wheeler, has been nominated by President Trump to be Deputy EPA Administrator. “Bob Murray and every other coal industry executive must be as giddy as kids the night before Christmas,” said EWG President Ken Cook. “The idea that one of their own lobbyists would one day be a top EPA official in charge of ‘regulating’ the coal industry was sheer fantasy until now. No one should think for a second Wheeler will shed his years of work for and allegiance to polluters, and instead take seriously his duty to safeguard public health and environmental protections.”

However, the reemergence of black lung, a disease with just 31 reported cases at the end of the 20th century, may become a pressure point for an industry that is eager to shed health and safety regulations. In December 2017, courts upheld the Black Lung Benefits Act, which holds companies responsible for the disease and requires that employers pay for associated health care costs. However, miners were largely unable to access these benefits until the passage of the Affordable Care Act.

"Coal company lawyers would doctor shop around the country and find two, three, four, five, seven doctors to say, 'Yes this miner is disabled, but it's not because of black lung,'" said Debbie Wills, a coordinator for the black lung program for Valley Health primary care system. The Affordable Care Act includes something called the Byrd Amendments. One shifts the burden of proof — instead of miners having to prove that mining caused their black lung, the coal companies have to prove that mining didn't.

"You still have to prove the 100 percent disability, which is hard," says Wills. "But if you can prove that, and if you've worked 15 or more years or longer in the mines, then you're entitled to a presumption that your disease arose from your coal mine employment."