The Bison are Back at Banff 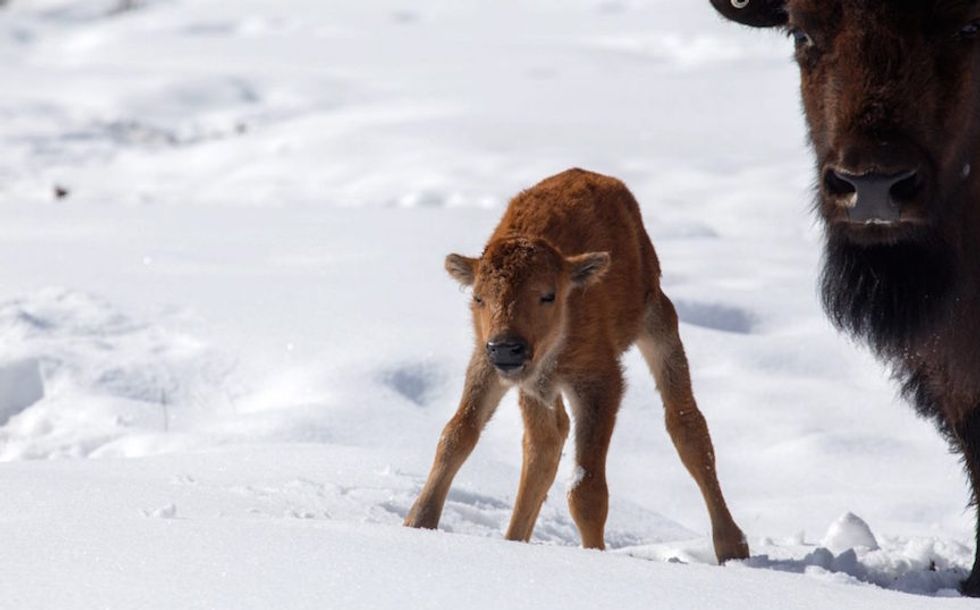 In the 1800s, big game hunters drove bison nearly to extinction in North America, and in places like Canada’s Banff region, which once supported 30 million bison, the animals were entirely wiped out. In an incredible comeback story, however, a small herd of 16 plains bison, including 10 pregnant females, were reintroduced to the park this year. The animals were airlifted into a secluded valley in the park, then set hoof on the ground their ancestors trod for millennia.

Now, the babies are arriving, the first new generation of bison to be born in Banff in 140 years. Striking a symbolic note, the first one was born on Earth Day, April 22, and if all goes well, the herd will number 26 this summer. Banff's resource conservation manager Bill Hunt said the females are "doing a great job" and nursing well in the enclosed paddock area in which the herd is being temporarily held.

"The bison moms know what they're doing," he said. "Our staff are in the woods carefully hiding from the sidelines to see if everything's going well."

Hunt says that mother bison bond closely with the geographic area in which they give birth and raise their young. The reintroduction team hopes that when the animals are released from the paddock in 2018, after delivering two rounds of babies, they will stick close to the valley and stay in the park. There, visitors can admire them and their grazing habits will help maintain a healthy natural ecosystem.

The bison, which arrived in February 2017 from a herd in central Alberta’s Elk Island National Park, will eventually have access to a 460-square-mile zone in the western Canadian province.

The past is past, and with North America increasingly paved, farmed, or developed, it may be hard to see what role a huge, ancient creature of the prairie can play in the modern world. However, Parks Canada says their absence in the Banff ecosystem has set the natural

world out of order. Bringing them back will restore the grasslands, influencing habitats for other native species, as well as provide hunting opportunities for the park’s other bog players, predators like bears and wolves.

"This would be one of only four plains bison herds in North America that would be fully interacting with their predators and shaping the ecosystem as they did over a hundred years ago," said Karsten Heuer, the bison reintroduction project manager.

Bison are considered a “keystone species” in their natural habitat. Their grazing activities increase soil nutrient levels, help plant diversity, dispersal of seeds, and improve the quality of nesting for prairie birds. They also act as landscape engineer, moving earth with their powerful, huge bodies to create ephemeral pools, which provide standing water and habitat for toads and wetland plant species.

In addition, the bison hold a significant place in native culture, and bringing them back to the area will enable indigenous people to witness and potentially hunt a species that figures large in their traditions and narratives. Tribal elders blessed the park and the grounds upon which the bison were released.

“Our plains culture is very closely tied, and in many cases, based on our relationship with the buffalo,” says Leroy Little Bear, a University of Lethbridge professor and researcher who assisted with the reintroduction project. “Our youth do not see the buffalo on a daily basis and consequently make no connections, so those parts of the culture based on the buffalo are not reinforced.”

"Restoring wild bison … is the righting of wrong that was caused in the 19th century when we almost eliminated wild bison as a species,” said Harvey Locke, a conservationist, writer and trustee with the Eleanor Luxton Historical Foundation in Banff. “Banff Park was involved

in saving the species from extinction 100 years ago, and today it's involved in restoring this species as part of the landscape, as a wild animal, and that is really exciting."

Not everyone is thrilled about the return of the bison, however. Ranchers on the eastern slopes have contended that the bison could escape the park and spread disease to cattle herds that graze on nearby lands.

In the event that bison escape the reintroduction zone, Parks Canada has a response plan that includes herding, recapturing, and as a last effort, killing the animals. As for disease, the bison in Elk Island Park are genetically pure plains bison and routinely tested by the Canadian Food Inspection Agency to ensure they are free of diseases such as tuberculosis and brucellosis. Parks Canada will continue that rigorous testing. If disease is transmitted from cattle to bison, officials will cull the herd.

Parks Canada, tribal representatives, and parks visitors will keep a close eye on the $6.5 million reintroduction project, which is intended not only to restore balance to the natural world, but to also offer “an opportunity for visitors to discover an important part of Banff’s heritage.”

Excitement is high in the Banff park region, a year-round tourist destination known for its spectacular mountains and wilderness activities. In 2016, a record-setting 3.89 million people visited the park, and this historic accomplishment will no doubt draw more. However, the team involved in the bison reintroduction don’t view them as a new park feature, but rather, the return of a native resident.

“The bigger human accomplishment is to have the foresight to actually make these kind of efforts unnecessary,” said Heuer.