Biohacker Used Eyedrops To Give Himself Temporary Night Vision 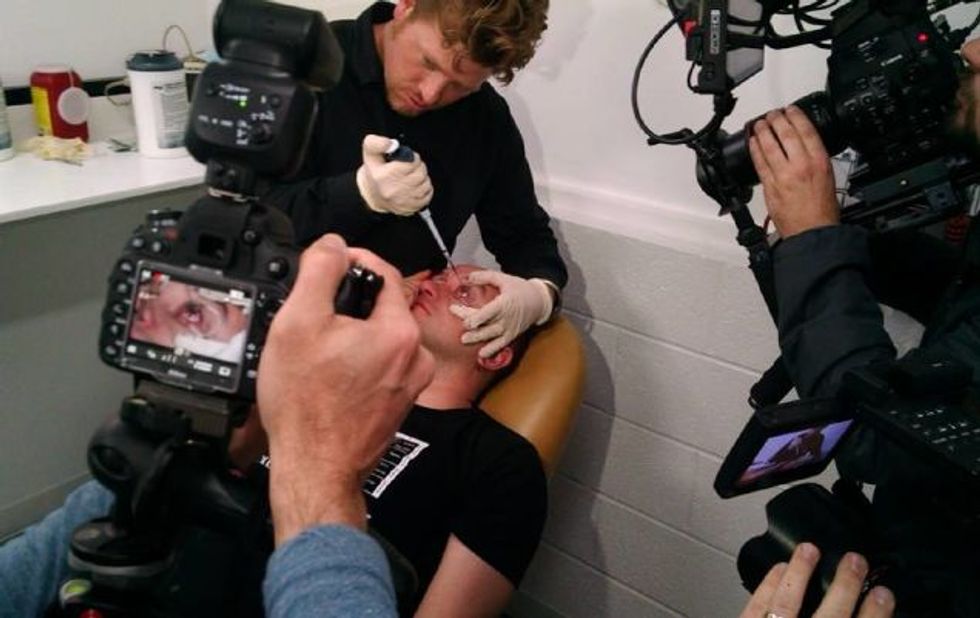 A team of biohackers from California successfully induced a temporary sense of night vision by injecting a simple chemical cocktail directly onto the eye. Incredibly, it allowed them to see over 160 feet in the dark for a brief period of time.

The group, called Science for the Masses, wanted to see if a kind of chemical chlorophyll analog — Chlorin e6 (or Ce6) — would create the expected effect. This chemical mixture is found in some deep-sea fish and is often used to treat cancer and night blindness.

Back in 2012, a patent was filed by Totada R. Shantha on a mixture that, when absorbed by the retina, would act to induce night vision — the ability to see nearby objects in low light conditions.

The patent holders claimed it was safe to use for treating a condition known as night blindness, but also for improving night vision in healthy people. The Science for the Masses hackers basically used this same formula, but they created their own concoction by adding both insulin and dimethlysulfoxide (which increases permeability) to the saline solution (normally, just insulin is used in conjunction with Ce6 and saline). The compound works by influencing the way our retina's light-sensing rods work in the dark.

During the experiment, biochemistry researcher Gabriel Licina volunteered to be the guinea pig. Team member Jeffrey Tibbetts dribbled 50 microliters of Ce6 into Licina's outstretched eyes, aiming for the conjunctival sac, which delivers the compound to the retina.

"To me, it was a quick, greenish-black blur across my vision, and then it dissolved into my eyes," Licina told Mic.

And then they waited. From the patent they read, the effects start kicking in within an hour. Licina and Tibbetts had done their research, going so far as to post a paper called "A Review on Night Enhancement Eyedrops Using Chlorin e6." But they are, after all, a bunch of guys working out of a garage. So they went out to a dark field and tested Licina's new superpowers.

Did it work? Yes. It started with shapes, hung about 10 meters away. "I'm talking like the size of my hand," Licina says. Before long, they were able to do longer distances, recognizing symbols and identifying moving subjects against different backgrounds.

"The other test, we had people go stand in the woods," he says. "At 50 meters, we could figure out where they were, even if they were standing up against a tree." Each time, Licina had a 100% success rate. The control group, without being dosed with Ce6, only got them right a third of the time.

Fascinating! But as the do-it-yourselfers point out, you need to be very careful if you wish to try this at home, noting that: "Increased light amplification may have adverse effects on the cellular structure of the eye if improperly used and the some of the materials used in this mixture should not be used on humans or animals." The purpose of the study was for "research and informative purposes only."

As for potential applications, there are many. In addition to treating disease, Ce6 could be used to enhance night vision in soldiers, night patrollers, police, night drivers, factory workers, and anyone else involved in work, travel, and fun after the sun goes down.

You can read the team's full report here.

Originally published in i09 via Mic. All images: Science for the Masses.